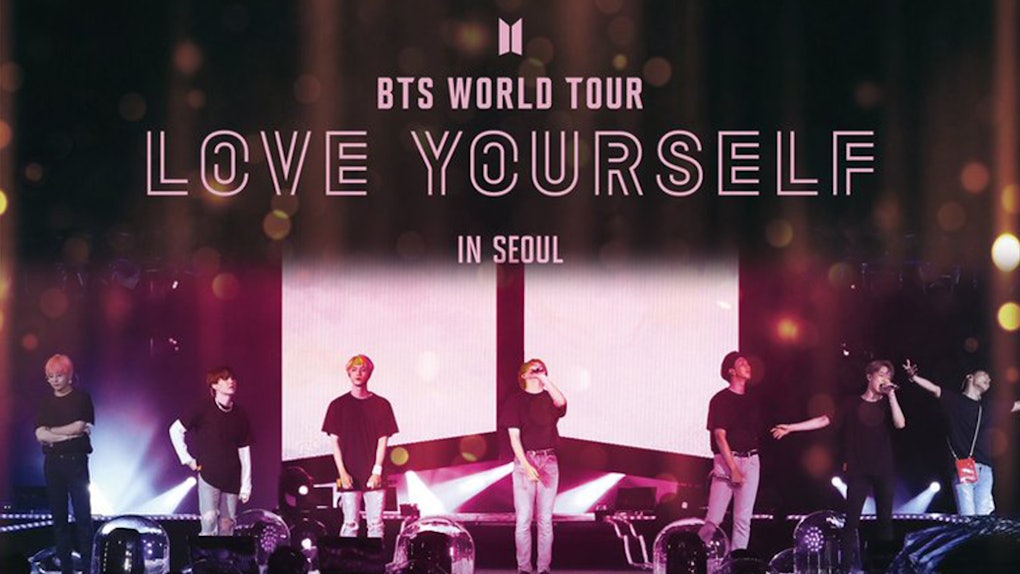 A BTS 'Love Yourself' Concert Movie Is Coming, So You Can Watch Them Burn The Stage Again

2018 has been such a roller coaster ride for BTS fans. The ARMY's fave boys have really been showing up and showing out in all aspects of their career, from breaking Billboard records with their music to setting box office records with their first movie, Burn The Stage: The Movie. And BTS isn't done yet. 2019 is going to be just as jam-packed with new content from the boys as 2018 was, at least if their latest announcement is anything to go by. It was just announced on BTS' official Twitter that, following the success of Burn The Stage: The Movie, the boys are releasing another movie in theaters. And let me tell you, the BTS Love Yourself concert movie sounds like an ARMY's dream come true.

On Dec. 13, the official BTS Twitter account tweeted out the announcement and poster for the BTS World Tour: Love Yourself in Seoul concert movie. The movie, which hits theaters on Saturday, January 26, 2019 for one day only, will let moviegoers relive BTS' Love Yourself world tour concert at the Seoul Olympic Stadium in South Korea that took place back in August 2018. Here's what the official synopsis of the movie says:

Considering the concert this movie will cover kicked off the Love Yourself world tour, it's not hard to imagine how amazing it's going to be to watch on the big screen in theaters, especially if you weren't lucky enough to snag tickets to see the boys live on tour.

This movie announcement comes as especially good news to me. While I loved Burn The Stage and went to see it twice, if I had to pick one thing that I would have loved to see more of in BTS' first movie, it would have been more live performances. But it looks like Big Hit always had that in the cards.

Not that the lack of live performances stopped Burn The Stage from being a huge success. The movie broke box office records, easily snagging the record for highest-grossing event cinema concert production that was previously held by One Direction's documentary concert film, One Direction: Where We Are, in its short four-day run.

And this movie news came shortly before BTS took to the Mnet Asian Music Awards stage to accept the award for Artist of the Year and revealed in their emotional speech that they had considered breaking up in early 2018 because of the nonstop pressure involved with being idols. To think how far the boys have come since having those thoughts of disbanding!