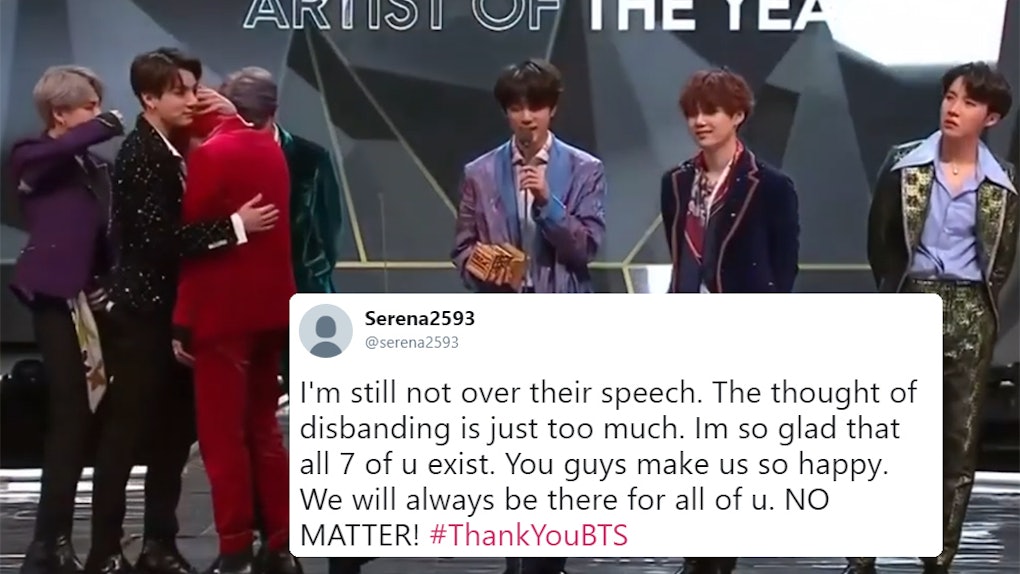 From the outside looking in, BTS' meteoric rise to international fame can look like it happened easily and overnight. In 2018, Jungkook, Jimin, V, RM, Suga, Jin, and J-Hope have dropped hit single after hit single, broken Billboard records, won almost every award imaginable all over the globe, broken box office records with their Burn The Stage movie, and sold out stadiums worldwide on their Love Yourself tour. They made it all look easy, if I'm being honest, and considering the boys renewed their contract with Big Hit Entertainment for an additional seven years in October, it's easy to assume their road to superstardom has been just peachy. But the video of BTS' MAMA Artist of the Year acceptance speech at the 2018 Mnet Asian Music Awards proves the boys' lives over the past few years has been anything but easy, and at one point, they even considered breaking up altogether to escape the pressures of international fame.

I'll set the stage: The boys attended the Mnet Asian Music Awards on Dec. 14, where they unsurprisingly won almost every award they were nominated for. Throughout the night, the boys won the awards for Mwave Global Choice, Best Asian Style, TikTok Best Music Video for "IDOL," and Album of the Year for Love Yourself: Tear. But it was when the boys hit the stage to accept the last award of the night, the daesang ("grand prize") for Artist of the Year, when things got truly emotional.

J-Hope stepped up to the mic first, almost immediately breaking down in tears as he opened up about the pressure the boys feel to deliver amazing performances, and how loved he feels by the fans and his bandmates after all their success this year. According to a translation by AllKPop, J-Hope said:

ARMY, I worried a lot before coming here. I want to show you our best all the time without any mistakes so we always prepare the stage with worried hearts. This award... I would've cried today no matter if we won this award or not. I wanted to repay because we worked so hard and received so much love from you guys. Thank you so so much and I want to say thanks to the members who are together with me at this moment. Thank you. I love you.

J-Hope's bandmates were visibly moved by his speech, crying along with him. Jimin spoke next, echoing J-Hope's thoughts and hinting at the reality that 2018 was a challenging year for the band. According to AllKPop, he said:

ARMY, thank you. Over the year, there could've been many hard times you know... We had times where we got together and had discussions. What we felt is that we have so many people around us. So we want to thank you guys for always giving us encouragement. We really wanted to receive this award here again. Your pride in us is our pride. We will show a better side of us next year and show you guys this award again.

Next came V, who took a moment to thank his parents for all they'd done for him over the years, saying:

Mom and dad who are watching this, thank you for taking care of me. This award is unbelievable and I will become a hardworking singer who isn't an embarrassment to this award. We receive so many amazing awards at the end of the year. ARMY is such a meaningful gift. Thank you so much and I love you.

Then Suga stepped up, echoing V's thanks to the parents of the members of the group:

Thank you ARMYs. I'm happy to be receiving the Artist of the Year. ARMYs who are always watching us, I will consider this an award by you and will work hard. I want to thank our families who gave birth to the seven brothers. 2018 was a year that made me wonder if I could be this happy in my life. I will make 2019 an even more amazing year.

Finally, when Jin approached the mic, in a moment of true raw emotion, he revealed that the boys had actually considered breaking up at the beginning of the year because of all the pressure they were feeling from all sides and the mental toll it was taking on them. When he uttered the word disbandment, V broke down crying beside him almost instantly, which suggests it was an emotional time for him.

Here's what he said:

I remember early this year. We were mentally struggling at the beginning of the year. While talking amongst ourselves, we even considered disbanding. I think it's so fortunate that we got ourselves together and was able to bring good outcomes. I want to thank my members who helped me get myself together and the ARMYs who love us.

Check out the emotional speech in its entirety below:

Although BTS does a top-notch job of being professionals and always delivers amazing performances so that fans don't ever get a hint of the hardships they're going through, when you really think about it, it's not hard to imagine the pressure these seven boys must be experiencing on a daily basis as they travel the world performing for their fans at break-neck speed. Fans truly appreciated the boys opening up in their acceptance speech and for finding it within themselves to keep going as a band.

This authentic moment is why BTS and the ARMY is unstoppable. Thank you, BTS. You deserve everything that's coming your way!

More like this
I Tried Singing While Running Like Miley Cyrus & OMG, My Lungs
By Rachel Varina
Which Album Will Taylor Swift Re-Release Next? Her Hints Have Fans Shaking
By Brandy Robidoux
Colton Underwood Is Reportedly Making A Netflix Show After Coming Out As Gay
By Dylan Kickham
Stay up to date