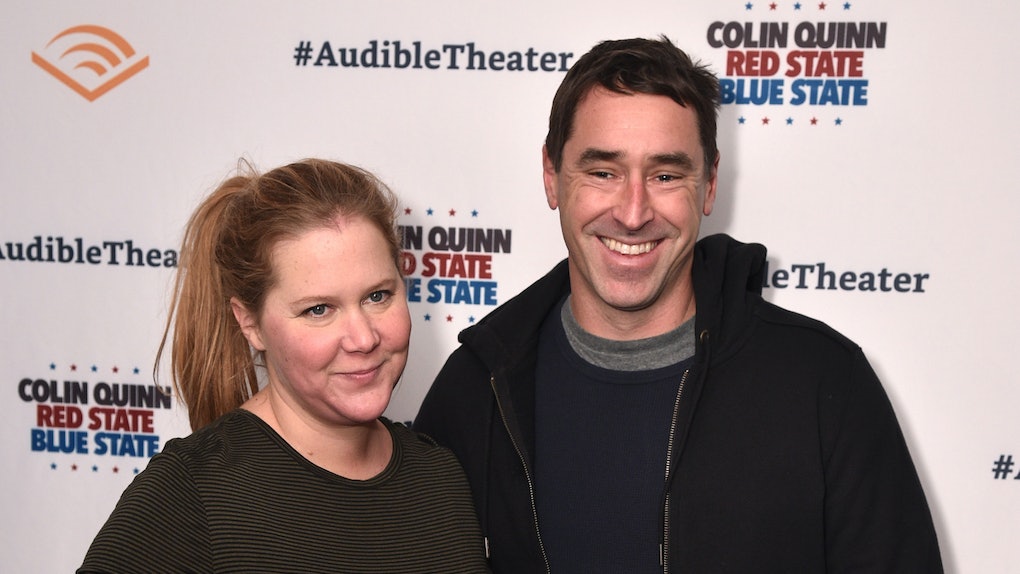 What Is Amy Schumer's Baby's Name? She Just Announced It With The Sweetest Photo

Are you sick of all the baby news now that Meghan Markle had her baby? Too bad! Amy Schumer just had hers as well, so we're in baby central, people. The comedian announced on Instagram on May 6 (the day Baby Sussex was born) that she had given birth to her and husband Chris Fischer's son on Sunday, May 5. So what is Amy Schumer's baby's name? She debuted the little guy's moniker on Instagram on May 7.

Schumer joked on Instagram the days leading up to her giving birth that she felt like she had been pregnant for forever.

"Oh yeah does it feel to everyone like I’ve been pregnant for a long time?" she said on the 'Gram. "It must be getting annoying to you all that I’m still pregnant Well imagine how I feel mother f*ckers!!!!!! #soblessed #hatemondaysloveweekendstho." This was just after she posted an Instagram announcing that she and Fischer were expecting a baby boy.

Not even three days later, she was no longer pregnant! Schumer revealed on Instagram on May 6 that she had given birth the night before, and the photo she posted of her, Fischer, and their baby was so sweet.

Welcome to the world, little one!

Then, on the evening of May 7, Schumer revealed the name she and Fischer gave their son.

"Gene Attell Fischer And his dad Chris," she captioned the sweet photo.

I'm not going to lie, Gene is a surprisingly old-school name. I don't know what kind of name I expected to see from Schumer, but Gene definitely wasn't on the list. But it's cute and classic, for sure!

Schumer kept up the humor on social media throughout her pregnancy, as you can tell from this photo she posted a few days before Gene arrived.

It's funny that Schumer and Meghan Markle were pregnant at the same time and gave birth to their babies less than 12 hours apart, but it seemed like Schumer has been pregnant for a while and Meghan was pregnant for like, five minutes. Time is a construct, fam.

Meghan Markle isn't the only royal mom Schumer had something in common with over the last nine months, though. Schumer had hyperemesis gravidarum throughout her entire pregnancy — a condition Kate Middleton also had throughout all three of her own pregnancies. To make the description of a complicated condition short, it basically causes extreme nausea throughout a pregnancy. The symptoms typically subside after the first trimester, but Schumer said she lived with it for the entirety of hers, which no doubt made her feel like her pregnancy was lasting forever.

But the new mama powered through with humor, as she always does, and now she and Fischer have little Gene! Congrats to the new parents, and congrats to Gene for being born into a family where he has a hilarious comedian for a mother and literal chef for a father. A dream.