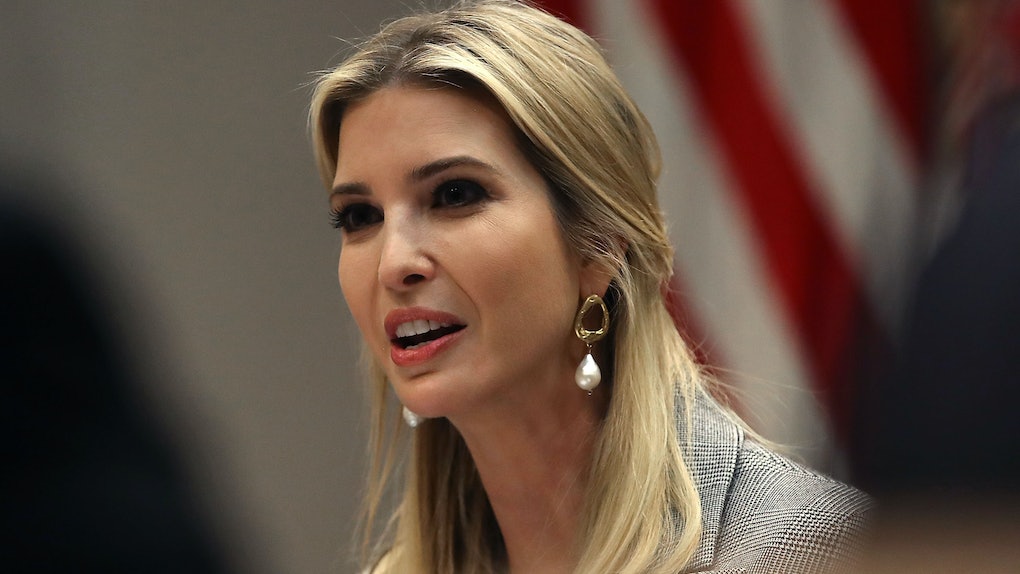 What Has Ivanka Trump Done In The White House? She Might Be All Talk

Ivanka Trump might go down in history as the most involved first daughter in the White House. Throughout her father's entire presidential campaign, Trump not only supported his policies, but also emphasized that she would work to make some changes of her own. So this begs the question, what has Ivanka Trump done in the White House?

The eldest Trump daughter certainly spoke a big game while campaigning for her father. Perhaps her biggest speaking point was geared towards women's rights, where she claimed that her father would actively fight for gender pay equality. There's no doubt that Trump had a huge role in garnering support for Donald Trump, but what exactly has Trump role been since Donald Trump was elected? After securing Donald Trump as president-elect, Trump appeared alongside her family for a 60 Minutes interview on Nov. 13, 2016 and declared that she would stand by her father's side as a "daughter" and support system.

Ivanka Trump's name might be as well known as Donald Trump's at this point, but what has Trump accomplished since taking her White House role? It looks like she might be all talk and no action.

Trump Became An Official Federal Employee, As The Assistant To President Donald Trump

Ivanka Trump was met with criticism once she officially moved into the West Wing. So, on March 29, 2017 the White House announced in that the first daughter would be an official federal employee and assume the role of Assistant to the President.

We are pleased that Ivanka Trump has chosen to take this step in her unprecedented role as First Daughter and in support of the President. Ivanka’s service as an unpaid employee furthers our commitment to ethics, transparency, and compliance and affords her increased opportunities to lead initiatives driving real policy benefits for the American public that would not have been available to her previously.

Trump also responded to the announcement with a statement of her own, in which she promised to be ethical and fair in her new title, while not collecting a salary. She said,

I have heard the concerns some have with my advising the president in my personal capacity while voluntarily complying with all ethics rules and I will instead serve as an unpaid employee in the White House Office, subject to all of the same rules as other federal employees.

Trump may not be making any money as a White House employee, but reports have claimed that she's still allegedly making some serious cash from the Trump Organization.

She Met With Planned Parenthood's President, But It Wasn't So Successful

After the meeting, Richards spoke to BuzzFeed about Trump's lack of involvement in the fight for women's rights, and urged her to stand up and fight.

"The president's daughter's silence on the way the legislation would affect women has been deafening, Richards told BuzzFeed. "It's time for Ivanka to stand for women."

She's Championed STEM For Girls, So That's Not Too Bad

Trump has been big on getting women into STEM (Science, Technology, Engineering, & Math) fields. On April 20, 2017 Ivanka Trump published her book Women Who Work: Rewriting the Rules for Success, which highlights advice for women in the workforce. Instead of taking the royalties for herself, Trump decided to donate all proceeds of her book to her Ivanka M. Trump charitable fund, which provides grants to The Boys & Girls Club of America's STEM program for girls. Trump also revealed via a Facebook post that prior to the donations, her charitable fund would give grants of $100,000 to the program.

She's also championed nationally funded programs to promote STEM fields. In September 2017, she spearheaded a successful initiative to get the Department of Education to invest $200 million in STEM and computer science programs in schools, according to CNN. This is definitely a helpful step to advance education for young women, so good on Trump for this one.

Then again, in January 2018 she removed the phrase "advocate for the education and empowerment of women & girls" from her Twitter bio, so there's that too. Maybe she just ran out of space.

She's Skipped Out When Things Got Tough

Even though everyone deserves a vacation, it looks like Trump takes hers at the most unfortunate times.

On April 10, while the White House was dealing with the FBI's raid of Donald Trump's lawyer, Michael Cohen's, hotel room along with threats of attacking Syria, Trump announced via Twitter that she'd be traveling to Peru in honor of the Summits of the Americas. This isn't exactly a vacation, since she'll reportedly unveil a new program for women's economic empowerment in the region and meet with female entrepreneurs in Lima, Peru — but I'd much rather be doing that than dealing with what's going down in the White House.

This isn't the only time Trump has managed to slip away from D.C. just in time to avoid turmoil. In 2017, while Republicans tried (and failed) to repeal the Affordable Care Act, Trump took her family to Aspen for a lovely ski trip. Then, in August of 2017 during the Charlottesville protests, in which a woman was killed, Ivanka jetted off to Vermont for some down time.

For a federal employee, she sure does take advantage of those vacation days.

She's Advocated For Paid Leave, But Not Very Well

In May 2017, the Donald Trump administration unveiled the 2018 budget proposal, which included a mandatory six week paid family leave to new parents. This is a topic that Trump has talked about since Donald Trump's campaign trail, so clearly the first daughter played a key role in getting the ball moving.

Following the announcement, Trump published an opinion letter in The Wall Street Journal about the paid family leave policy, saying that it will benefit all parents, but especially women.

While this policy will benefit all working parents, it will have an especially positive effect for women, who are far more likely than men to leave the workforce to provide unpaid care for a child. ... Additionally, making it easier for new parents to return to work after the arrival of a new baby is a critical part of solving the persistent gender and minority pay gap that exists in part because of prolonged periods away from the workforce and challenges with re-entry.

However, the paid leave proposal didn't make it off the ground. As of December of that year, Politifact noted that there had been neither solid plans on how to implement a paid leave proposal nor any progress, and rated the proposal "stalled." In February 2018 the same paid leave plan made it into the 2019 budget proposal, and it remains to be seen where it will go — but I wouldn't get my hopes up.

Even Though She's Spoken For Gender Equality, Some Women Aren't Buying The Act

Ivanka Trump may claim to fight for women's rights, but many successful women have taken it upon themselves to step up and reprimand Trump's wishy-washy feminist values. One of them was Reshma Saujani, the founder and CEO of Girls Who Code. Once Saujani realized Trump had featured her in her new book Women Who Work: Rewriting the Rules for Success, Saujani took to Twitter in May 2017 to urge Trump to stop being "complicit" in her father's actions in the White House.

Environmental conversationist Jane Goodall, who was quoted in Trump's book, also urged the first daughter to speak out for important issues during an interview with The Washington Post in May 2017.

“She is in a position to do much good or terrible harm,” Goodall told The Post. “I hope that Ms. Trump will stand with us to value and cherish our natural world and protect this planet for future generations.”

A handful of other celebrities and well known women have also taken to social media to urge Trump to make the changes she promised.

Who knows if Trump has great plans for the future, but if so, she better get started soon. It doesn't seem to have been going too well so far.

More like this
These Tweets About The Bidens' Photo With The Carters Ask A LOT Of Questions
By Rhyma Castillo
These Red, White, & Blue Team USA Oreos & Chips Ahoy! Cookies Are So Colorful
By Daffany Chan
What Does Pepsi Blue Taste Like? It Has Familiar Fruity Flavors
By Cianna Garrison
Stay up to date