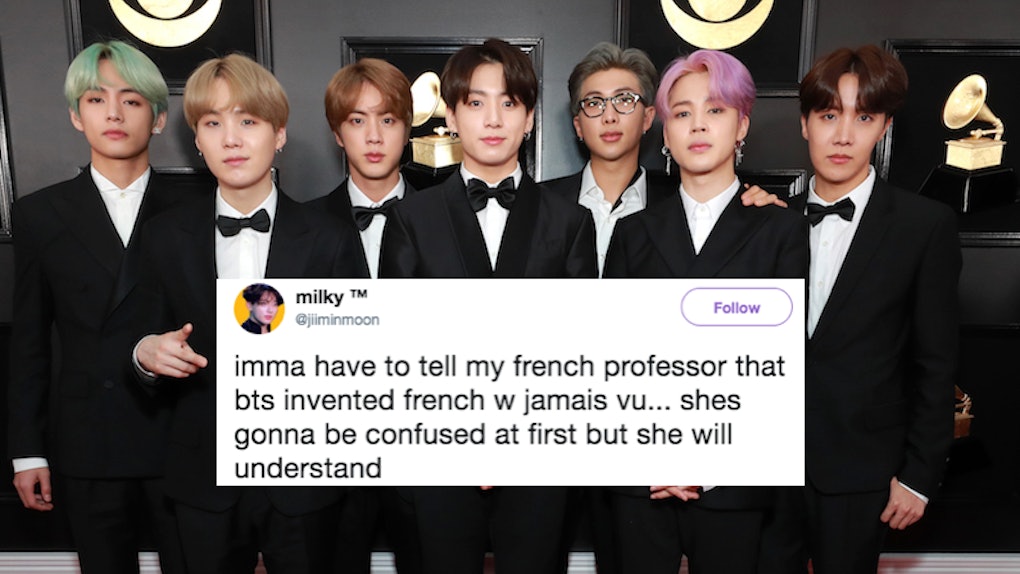 What Does "Jamais Vu" Mean? BTS' New Track Will Probably Give You The Opposite Of Deja Vu

There is a lot that goes into being a K-pop idol. The obvious characteristics include, but are not limited to, impeccable dance skills, extreme dedication, a voice like an angel, an amazing head of hair, a knack for languages, and a habit of deep, intellectual thought. The last one has never been more apparent than with the release of BTS' Map of the Soul: Persona tracklist. The song titles are intense, you guys. And, a lot of them require Googling. For example, some people are wondering: what does "Jamais Vu" mean?

That's because that is the name of the sixth song out of the seven released via BTS' Twitter account on Monday, April 8. In having completed some internet-sleuthing research, I can tell you this: the answer is complicated.

Here is the best way I (jk, the Internet) can explain it: Jamais vu is kind of like the opposite of deja vu.

Deja vu — something you're probably already familiar with — is the sensation that you've seen or experienced something before even though you know that you haven't. It's unclear what triggers deja vu, and, for a lot of people, the sensation can be unsettling.

Jamais vu is kind of like the inverse. It occurs when you come up against something you've seen or experienced many times before, but for some reason, it feels unfamiliar. An easy way to wrap your mind around this is by writing or saying one word over and over again. After a few minutes, the word begins to sound like gibberish or totally foreign — like it's not a word at all. (I think the words "coffee" and "fork" are good examples. Say them 100 times fast out loud, and — boom — that's some real jamais vu.)

OK. Still with me?

Billboard also explains jamais vu is French for "never seen" which has a similar connotation the definition described above. Fans took a stab at it on Twitter, too.

One person explained, "jamais vu means a disorder of memory, someone who doesn't recognize familiar [sic] things or even people– euphoria wonder."

Another French speaker explained it to some confused ARMYs like this:

"déjà vu" is more special it happens in more precise situations that leave you confused (it's psychological), but when we say "never seen before" (du jamais vu) it's really when something happens or was done for the first time

Some think BTS is using the phrase to resurface old work but in a new way. For example, this one fan wrote: "Jamais Vu is an experience where someone feels like they're experiencing a situation for the first time even though they KNOW they've been through it before... and now they're taking us back to the beginning to the Skool Luv Affair +"

I think the most romantic definition came from this ARMY: "It’s when you meet the same people or visit places, again and again but each time is the first. Everybody is always a stranger. Nothing is ever familiar."

For now, ARMYs will just have to wait until the full album drops on April 12 and they can get the lyrics to each and every song. Until then, keep the theories coming. I love scrolling until the wee hours of the morning and then dragging my jamais vu butt to work.