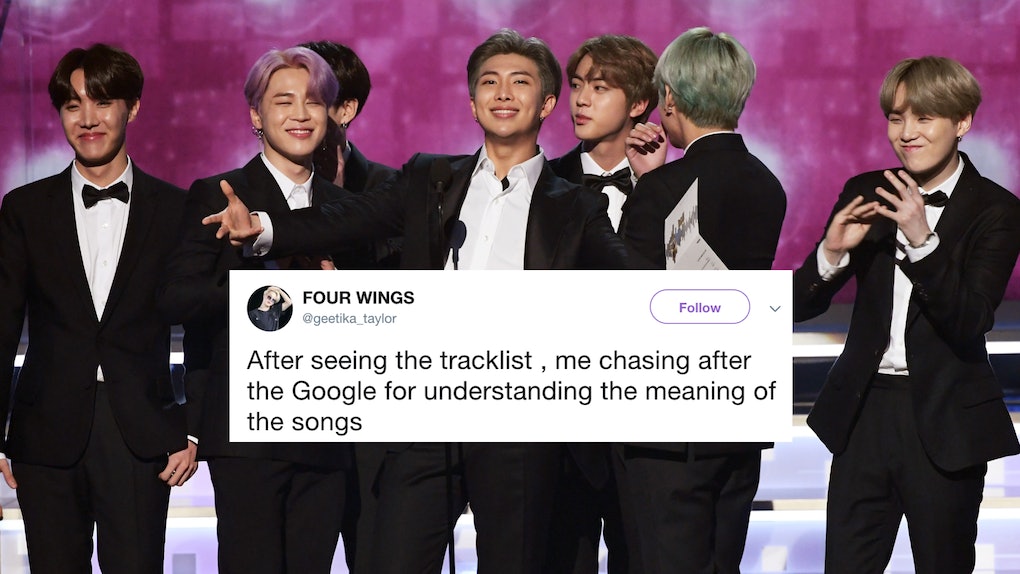 BTS' 'Map Of The Soul: Persona’ Tracklist Has ARMYs Theorizing About What The Titles Mean

BTS may have been on tour for the past eight months and prepping to go on another one right after, but that hasn’t stopped the famous K-Pop band from making more amazing music for their fans to enjoy! BTS' upcoming album Map of the Soul: Persona is slated to drop on April 12, which is just weeks before the guys are going to start their Love Yourself: Speak Yourself tour. Needless to say, the guys are busier than ever, but fans are loving every single second of it. Plus, they’re waiting with bated breath for that new album to drop. So, what exactly is on the album? Luckily for all the fans out there, BTS’ Map of the Soul: Persona tracklist has just been released.

BTS shared the official tracklist for their upcoming album on Twitter with the simple caption: "#BTS #방탄소년단 #MAP_OF_THE_SOUL_PERSONA Tracklist." Fans have been anticipating the announcement, especially since the album’s release date is fast approaching.

The songs are called:

Looks like an amazing tracklist, right? The BTS ARMY is certainly excited. They’re even more pumped for the album’s release on April 12, which is just a few days away! The BTS ARMY has actually been waiting for the album to drop since March 11, which is when the guys announced that a new album was coming. Within days, BTS fans broke records with pre-orders, which went on sale on March 13. By March 18, Billboard was reporting that over 2.6 million copies had already been sold on pre-order.

Now that the tracklist is here, ARMYs are going wild analyzing the song titles. Of course, Twitter is buzzing with theories. Right now, the tracklist only includes seven songs, which leaves some people wondering if there is actually another batch of tracks to come (aka, Map of the Soul will be another series like the Love Yourself trilogy)! Others are simply totally bewildered by the different languages and cultural references in the current titles. One thing is for sure though: everyone is hyped.

According to Billboard, the Map of the Soul: Persona album is on track to outsell BTS' past two albums. Love Yourself: Answer, which was released in September 2018, sold 2.7 million copies total. And Love Yourself: Tear, which was released in May 2018, sold 2.3 million copies total. So, the fact that Map of the Soul: Persona is already anticipated to surpass both of those previous albums is an amazing achievement.

Other than the tracklist and the amount of pre-order copies sold, there’s not much information available about the album at this point. Fans do have the "Boy With Luv" teaser which is a masterpiece in and of itself. (Hi Halsey! I see you girl!)

Obviously, everyone’s super excited about this new album and there’s probably going to be some talk about it for a long while. Also, considering the guys are going on tour, lucky concertgoers will almost certainly be treated to the new songs!

Can't wait to hear them!

More like this
Is Olivia Rodrigo's "Deja Vu" About Joshua Bassett & Sabrina Carpenter Again? Let's Investigate
By Brandy Robidoux and Michele Mendez
These Tweets About Taylor Swift's "Mr. Perfectly Fine" All Ask 1 Important Question
By Sydney N. Sweeney
With 'Like Water,' Wendy Found Her Biggest Cheerleaders In Her Red Velvet Bandmates
By Michele Mendez
Stay up to date