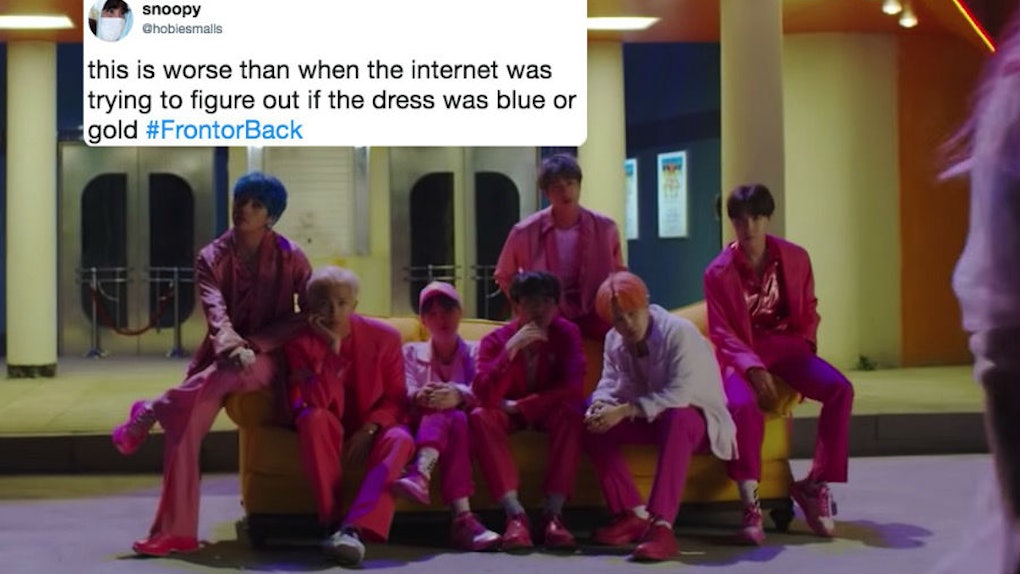 Map Of The Soul: Persona is going to be here so soon, BTS ARMY. The group has already dropped one teaser trailer for the album, which (for those of you who are new to the fandom) is usually a full song and music video performed by one of the group members. But BTS just dropped a new teaser for their title track that fits the standard definition of "teaser" you're used to. And it's with Halsey! The group teased their upcoming collaboration with the singer in a short clip, but what fans can't get over is Jimin's optical illusion in BTS' "Boy With Luv" teaser. This has basically become the white and gold vs. black and blue dress debacle of the BTS fandom. (The dress was white and gold. I'm not here to argue.)

The "Boy With Luv" teaser is less than a minute long, and includes only a tinyyyy little clip of music at the end, so the fact that something so short has got the entire fandom confused on Twitter is hilarious. The video starts out with Halsey in a movie theater's box office sporting long pink hair and a pink outfit. She closes up shop at the box office, then walks away. And who does she stroll by on her way out? V, Suga, RM, Jimin, Jin, Jungkook, and J-Hope casually sitting on a couch, looking all types of gorgeous decked out in pink outfits.

The last part of the teaser is what has fans scratching their heads on Twitter. The last shot shows the boys standing in a line in front of a large, illuminated sign that says "Love." ARMYs are so familiar with their faces that even though you can only see the boys' silhouettes, they could tell Jimin is the second person on the left in the lineup.

The confusing part is that when you watch the seven guys turn around, it totally looks like some wild optical illusion. At first, it looks like Jimin is facing the front after he turns around. But then, it all of a sudden looks like he's facing the back like the other boys.

What are we supposed to make of this?!

The BTS ARMY is so, so confused.

Confusing, right?! I swear the more I watch those clips, the more I think the video is changing. What is happening?!

Fans of the group are straight-up torn over this. Some are convinced he's facing the back, then there are plenty who have pointed out that his shoes seem to be facing forward. My best guess is that Jimin turns around to face the front in the video, but the lighting/shadows on his face when he turns make it seem like we're seeing the back of his head, and not the front. But consider me #TeamFront.

Outside of this confusion, this is a very exciting video! Just imagine the amazingness that a BTS/Halsey song is sure to be.

BigHit Entertainment released a statement about the upcoming release of Map Of The Soul: Persona when RM's "Persona" trailer dropped on March 27.

It read in part,

Featuring RM, the comeback trailer is the first taste of new music to be taken from the album. Amassing an incredible 2.6 million pre-orders worldwide in just five days, MAP OF THE SOUL: PERSONA is due for release on Friday 12th April via BigHit Entertainment.

April 12 is only a mere four days away, ARMYs! Come this Friday, April 12, the world will (hopefully) know for sure if Jimin is, in fact, facing front or back.