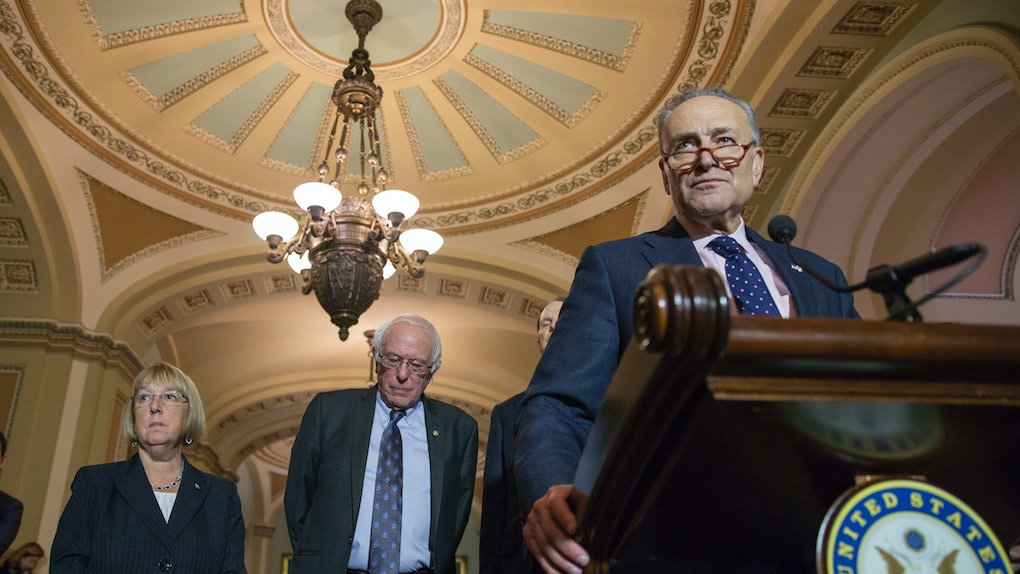 What Can I Do About Net Neutrality? Now Is The Time To Call Your Senator

Despite the fact that net neutrality regulations were officially repealed by the Federal Communications Commission (FCC) on Dec. 14, 2017, lawmakers in Washington have taken the first very important steps in reversing the commission's vote. Just over a week ago on Jan. 8, a Senate bill that would reverse the net neutrality regulations repeal received enough sponsors to guarantee that it will go to a vote. And now, Democrats have announced that they have 50 votes in Senate — one short of the number needed to overrule the net neutrality repeal. So now is the crucial time to call your senator and make your voice heard ahead of the Senate vote.

Although the official date for the vote has not yet been set, Senate Democrats are making it loud and clear that there is a legitimate, bi-partisan effort on Capitol Hill to reverse the FCC's controversial 3-2 vote to repeal net neutrality regulations, which had kept the internet open to all users at equal speeds and prevented internet service providers (ISPs) from favoring certain apps or websites over others. On Jan. 16, Senate Minority Leader Chuck Schumer (D-N.Y.) announced that the bill that would reverse the repeal of net neutrality was just one vote shy of the majority needed for it to pass on the floor. Schumer said in a press conference,

With full caucus support, it’s clear that Democrats are committed to fighting to keep the internet from becoming the Wild West where ISPs are free to offer premium service to only the wealthiest customers while average consumers are left with far inferior options.

The 50 votes Schumer claims he has secured include all 49 Democrats in the Senate (now including the newest senator from Alabama, Doug Jones) and one lone Republican. That Republican is Sen. Susan Collins (R-Maine) who announced just last week on Jan. 9 that she would join the Democrats' effort to repeal the FCC vote. If the Democrats manage to get just one more Republican to vote "yay" on the floor once the bill goes to a vote, it would pass 51-49 and send it to the House of Representatives for its next round of voting procedures.

So if you support net neutrality, it is crucial to call your senator now.

You can make it known that you are in support of the reversal of net neutrality repeal, so that your elected government officials can represent you to the best of their capacity.

The easiest way to do so is by calling the Capitol switchboard at 202-224-3121. When you call, give them your name and say where you're from, and you'll get connected to your senator or representative's office. You'll then likely be talking to a legislative assistant or leaving a voicemail. And if you have no idea what to say, not to worry! Here's an easy script to use during your call:

Hi, my name is [you], and I'm a constituent of Senator [name]. I'm calling to ask her/him to act in support of Senator Markey's bill to reverse the FCC vote that repealed net neutrality regulation. This is a very important issue to his/her constituents and I am watching how he/she is acting on net neutrality. Senator [name]'s vote on this bill will be taken into consideration when it comes to my future vote. Thank you!

This announcement comes just over a week after this bill that would reverse the FCC's decision to repeal net neutrality regulation received its 30th co-sponsor on Jan. 8. That 30 count on sponsors in the Senate ensures that the bill will hit the floor and go to a vote, date to-be-determined.

The bill was first introduced by Sen. Edward J. Markey (D-Mass.), who declared his intention to fight to repeal the FCC's decision on Dec. 14, the same day that the committee voted to repeal net neutrality. In a press release on his website, Markey announced that he and 33 other senators planned to introduce a Congressional Review Act (CRA) resolution that would undo the FCC vote.

If this bill passes with a 51 or higher "yay" majority vote in the Senate, it will then move to the House of Representatives where it will be voted on again — a daunting process, since Republicans hold a solid majority in the House. If the bill fails it's officially killed. But if it passes, it will go to the White House for approval of the president.

For now, it looks as though this bill is inching closer and closer to the necessary majority it needs in order to take the next step in its passing into law. So if you care about net neutrality and want those regulations back in place, take the time out of your day to call your senator's office and urge them to vote yes on this bill.