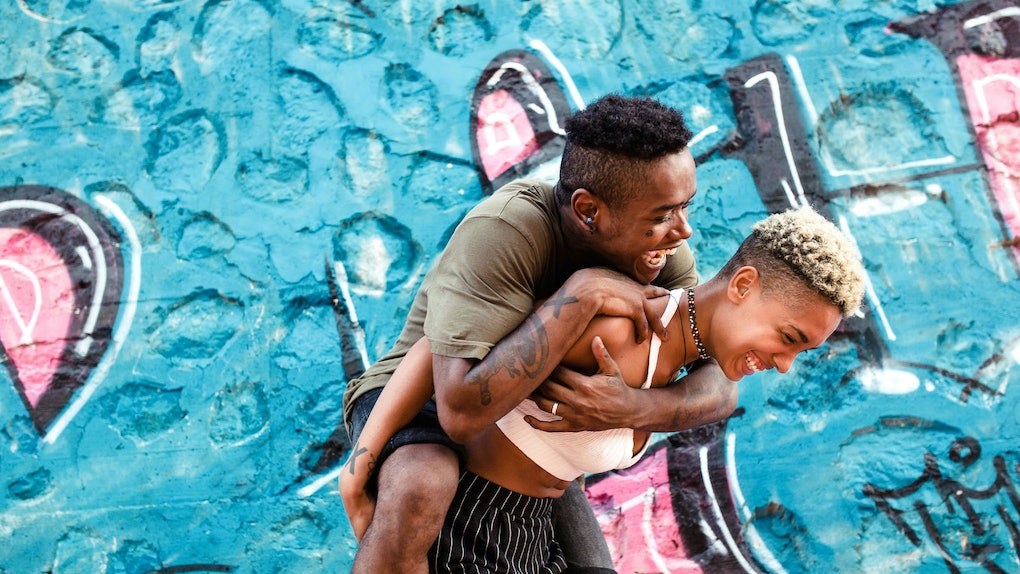 What Attracts You To A Person? 11 Women Reveal What They First Noticed About Their Partner

If you've ever spent an evening swiping through dating apps or wading through the bar scene, you know one incontrovertible truth: You can recognize that someone is attractive and still not be, well, attracted to them. What attracts you to a person is a complex web of personal preferences. It's totally normal to be drawn to certain people more than others. If your body, heart, and soul didn't help you filter out people you weren't that into, you'd basically be drowning in suitors. (Not that that's a problem. I mean, that sounds like The Bachelorette — not exactly a raw deal.)

My boyfriend Saul and I met on Tinder (when I interviewed him for this story), and I thought he was cute from the moment I swiped right. But it wasn't until we met up for drinks the next week that those little fireworks started going off in my brain. He had dark hair, dark eyes to match, and was perfectly dressed in a black cashmere sweater. Less than a minute after I slid onto the barstool, he had me cracking up. I remember thinking, "Oh, damn, I like this person."

That "Wait a sec, feelings?!" moment is different for everyone, so I asked around. I spoke to 11 women about what first attracted them to their partners, and their responses gave me butterflies all over again. Are you sitting down? Because you should get ready to swoon.

It was his voice. I’ve never heard a voice like his before and it kept pulling me in. To this day, I can’t hear his voice without getting all smitten.

This sounds cheesy, but her smile is so genuine and warm. We went for coffee on our first date, and the first time she smiled at me, I knew I was going to fall for her.

My partner and I had been friends for years before we started dating, and he has just always been someone who is incredibly fun and funny to be around. Yes, he's handsome and incredibly charming, but it was more of the fact that he had that 'it' quality that's so hard to describe. I just always wanted to be around him because he was (and is) always the life of the party.

My boyfriend and I made out on the ground of a street on our first date, so that's how I knew because he was ~ fun~.

How Comfortable She Instantly Felt Around Him

When I first matched with my now-boyfriend on a dating app, I thought he was cute and decided to send a flirty first message. His bio mentioned that he was 'looking for a tour guide,' since he was new to the city and coming from Ireland. I told him I knew some great Irish pubs. He responded quickly and we actually decided to go out for drinks that night. When we met in person, I immediately felt comfortable around him. We really hadn’t talked much over the app, but talking to him in real life was so easy and free of the normal first-date awkwardness. Now that we’re in a relationship, I feel like I can be my true self when I’m with him even more so — and that’s still really attractive.

The Way She Held Her Hand

My girlfriend and I blacked out in a cab and accidentally held hands, so...

The Effect He Had On Other People

I was only interested in my boyfriend at first because he was pursuing my best friend at the time. She had no interest in him, and I was jealous of all the attention she was getting. (I was like 16, please don't judge me, guys.)

I liked my boyfriend on Tinder because he looked harmless. Like, I could take him in a fight if need be.

His Sense Of Humor

What first attracted me to my partner was his sense of humor. Everything he did was so weird and over the top and hilarious, I could only play it cool for so long before totally giving in.

His Vulnerability When It Came To Serious Subjects

My partner and I had been friends for three years, and while I had always found him cute and kind, I had never considered exploring anything more. One summer, something changed. We were both single and working in the same city, and began spending more time together. As we bonded, becoming closer platonically, we started opening up about very serious topics of conversation — fears, insecurities, anxieties. I immediately became attracted to his vulnerability and unrelenting honesty. It was only then that I realized I had real feelings for him.

What I love most about these women's stories is the variety: There's no one way to capture someone's attention — the trick is to be unapologetically yourself in front of the right person at the right time. And sure, OK, flashing a smile their way doesn't hurt, either.