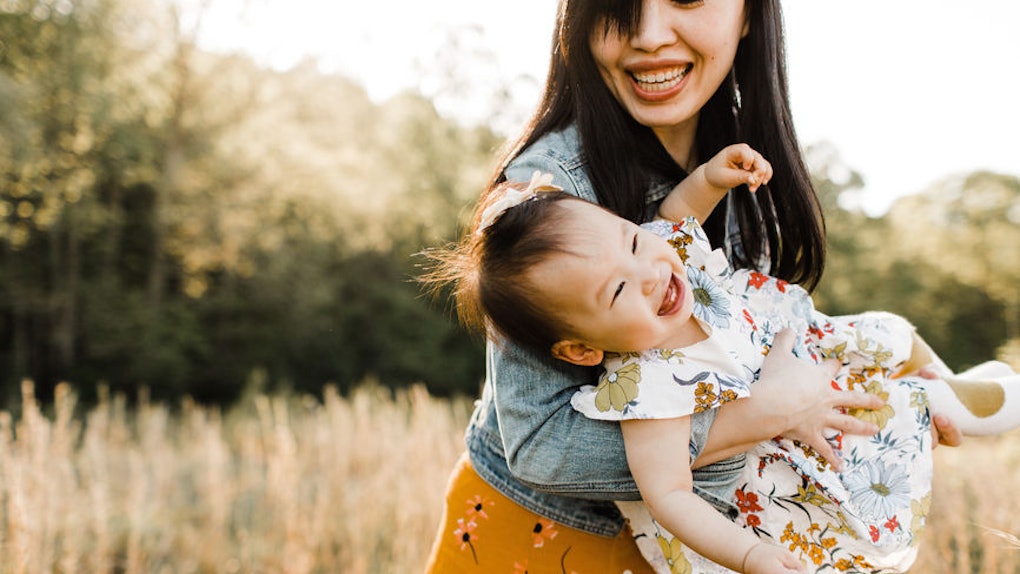 What Are The Earliest Memories A Person Can Have? Science Says Yours Might Be Totally Fictional

What are some of your earliest memories? How far back do you think they go? Maybe it's the very first time you took a step, or that cross-country trip your family took not too long after you were born. Personally, I recall, or have always believed I could recall, the first time I had a good laugh: I was about 2 years old, and I couldn't stop giggling as I watched a rogue bagel roll down my family's steep driveway. But, according to new research, the earliest memories a person can have happen a little later than age 2, and in fact, it might be downright impossible to have any true memories before then, despite the fact that many of us think we have these memories.

Now, if you, like me, are having a little trouble believing that your precious childhood memories are totally made up, or at least, that they're some kind of strange mix between a dream and reality, you're not alone: According to the new study, which was done by researchers at City, University of London, the University of Bradford, and Nottingham Trent University, nearly 40 percent of people have what are called "fictional memories" of their very early childhood.

But how the heck can you prove that someone else's childhood memory is "false" or fictional?

For their study, the researchers began by taking a survey of over 6,000 people, and while exactly 38.6 percent of respondents claimed to have memories from age 2 or younger, a whopping 893 people claimed they remembered things from age 1, or even younger. Apparently, the latter claim was most common in the older adults who participated in the survey.

In order to study the validity of people's first memories, the researchers asked their participants to write out, in detail, what they believed to be their first memory, as well as their age when said memory happened. It's worth noting that the participants were told only to detail a memory they were completely, 100 percent certain had actually happened — like my bagel story (which I am still convinced is real). In other words, the memory couldn't be based on a story someone often told about you, or a photo that might have prompted a "memory" of that experience.

Then, the researchers studied these descriptions and looked closely at all the details, the content, and the language used. According to a press release about the research on EurekAlert! Science News, the researchers' goal was to come up with "likely reasons why people claim memories from an age that research indicates they cannot be formed."

Given that many of the memories people claimed to have actually happened when they were 2 years old or younger — which, again, according to nearly all other research on the subject, simply isn't possible — the authors suggested that these fictional memories are, most likely, based on a collection of things: little bits of memory, like a favorite blanket, knowledge of your childhood, photos, and stories people have told you.

All these things come together to form what the researchers call a "mental representation," rather than an actual memory of a lived experience.

So basically, my bagel memory is, most likely, not something I can actually remember, but rather, something my brain has tricked me into thinking I can remember, based on what other people have told me about that story. I mean, I think it's a pretty cute anecdote, so I'm sticking with it, research be damned.

Martin Conway, a researcher on the study and director of the Centre for Memory and Law at City, University of London, said in a statement that a lot of the memories people claimed to have in the survey involved a pram (aka a stroller):

For this person, this type of memory could have resulted from someone saying something like 'mother had a large green pram'. The person then imagines what it would have looked like. Over time these fragments then becomes a memory and often the person will start to add things in such as a string of toys along the top.

Crucially, the person remembering [the memory] doesn't know this is fictional. In fact when people are told that their memories are false they often don't believe it.

But listen: Maybe it's because I don't want to believe it, but I'm in the camp that is still not totally convinced. I mean, who can ever be totally sure what a "real" memory is, and what's just some trick of perception? Plus, research in general about how human beings form memories still has such a long way to go, and there's so much more to be discovered here. For now, I'd rather keep my memories — especially the good ones.