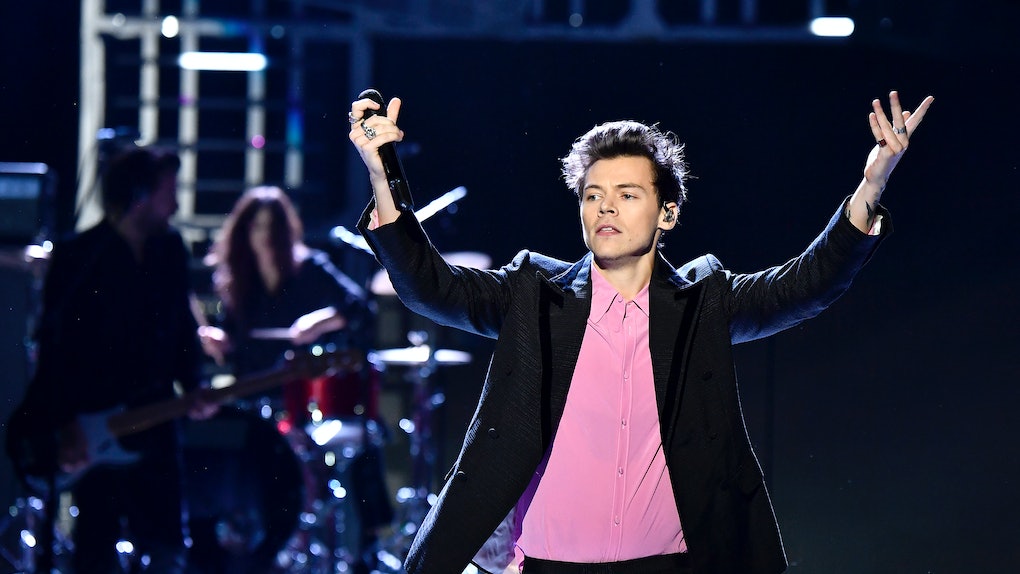 Honestly, it takes a lot to take the attention off the intricately-dressed angels at the Victoria's Secret Fashion Show. I MEAN, THEY'RE BASICALLY GODDESSES WALKING AMONG US. This year, one performer did manage to steal the spotlight, and memes about him have already taken over the internet. Memes about Harry Styles dancing at the VS Fashion Show are seriously everything, and I think they're quite literally giving me life.

Styles snagged one of the coveted spots as a performer during the VS Fashion Show in Shanghai, China. He is super charismatic, so, naturally, he stole a lot of the attention. Surprisingly, it's not his cunning smile or flowing hair that people are talking about — it's his dance moves. Basically, Styles dancing was a fusion of Mick Jagger and someone's uncle dancing at a wedding. It all added up into some hilarious and very Harry-esque moments.

Needless to say, Twitter is lit over Styles' dance moves. Who knew the Victoria's Secret Fashion Show could get any better? There's some pretty amazing tweets out there. Some real winners say:

"Harry Styles Dancing At The VS Fashion Show Is Everyone’s Dad At A BBQ." - @the1Dscene

Basically, Harry is snapping and gracefully gliding all over the catwalk. There's also a lot of strutting happening. His epic suits with a vintage flair only add to the allure that is his dad-style dancing.

Guys, he's clapping in this one.

Before we all laid eyes on Styles' glorious dancing, people were excited to see his interaction with the models. The singer has been romantically linked to many, many, MANY Victoria's Secret models in the past. The latest was in August when it was rumored that Styles was striking up a relationship with model Camille Rowe. The picture below is Rowe owning the runway during the 2016 show.

Although Rowe did not make an appearance on this year's runway, fans were still interested to see Styles perform with the notorious VS brand.

There hasn't been much stirring recently about Rowe and Styles. On Monday, Aug. 25, Styles and Rowe were photographed while out to eat together in Los Angeles. A fan managed to snag a picture of the two on their way out of the restaurant.

The Daily Mail reported that Styles was "besotted" with Rowe, but neither of them ever spoke on a possible romance. Low-key, it's really weird that Styles is carrying Rowe's purse. These dating rumors have never been confirmed, but what friend carries another friend's purse? Suspect AF.

Since there's no confirmation, I think it is safe to assume that Styles considers himself a single man. During his bopping around on the VS stage, his wandering eyes were noticed by fans.

There's been another Harry GIF floating around that has also been getting attention. Styles apparently couldn't take his eyes off VS angel Candice Swanepoel during her time on the catwalk. The GIF shows Styles giving some major side-eye (the good kind) to Swanepoel as she walked in a red and black ensemble and matching black wings.

The two reportedly open the show, so that's definitely something to look forward to.

Even if it's not romantic, people are HERE for the Harry and Candice combo.

In reality, Swanepoel has been with her fiancé, Hermann Nicoli, since 2005, according to Vogue. The couple welcomed their son, Anaca, in Oct. 2016. There's no point of shipping Styles and Swanepoel, but can we just agree they are a VS powerhouse? Yes, I think we can.

If you weren't excited for the Victoria's Secret Fashion Show before, I hope Harry Styles dancing has brought a whole new energy to the event. The show airs on CBS on Nov. 28.