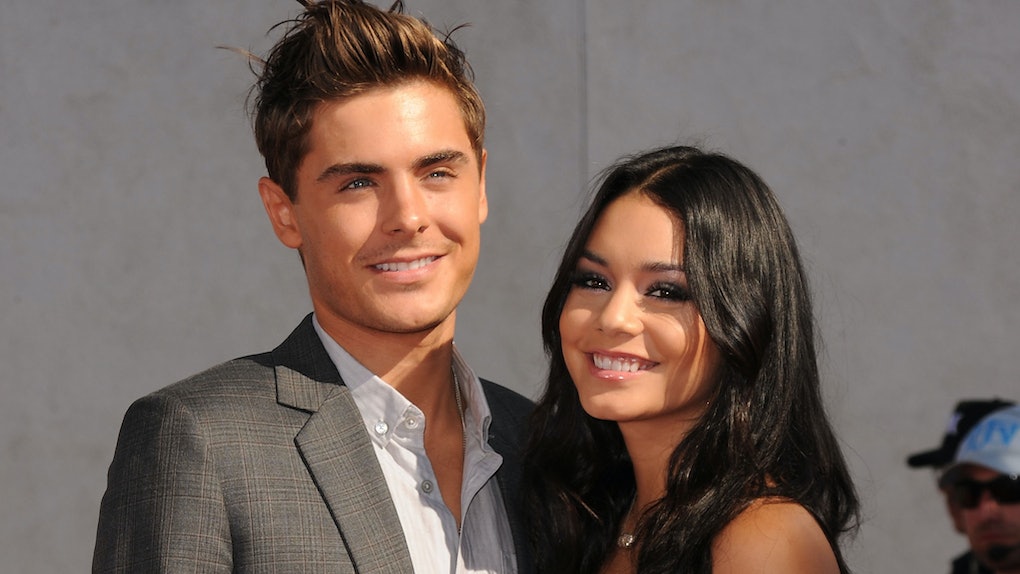 I will never forget the first time I heard about High School Musical. I was sitting in my sixth grade music class, and the popular girls next to me were talking about how absolutely dreamy Troy Bolton was. Ever trying to fit in, I adjusted my Hollister Bermuda shorts and made a mental note to watch it later. I became a fan immediately, not only of Troy and Gabriella in the movies, but also of IRL couple Zac Efron and Vanessa Hudgens. I was devastated when they broke up, but sadly, Vanessa Hudgens and Zac Efron's zodiac signs did not bode well for their romantic life. Their breakup was basically written in the stars.

To refresh your memory, Efron and Hudgens started dating in 2006 while starring opposite one another in the HSM franchise. They stayed together until 2010, when inside sources announced the split to E! News. "It's nothing dramatic," one source said at the time. "There's no third party involved." At the time, it was unclear exactly what drove them apart. In the years since, Hudgens has been open about her relationship with Efron, even telling the Awards Chatter podcast in April 2019 that she “could not have been more grateful” to have Efron by her side during those whirlwind years when their careers were taking off.

She’s also been honest about the tougher parts of dating Efron. In 2015, she told The New York Times that she struggled to see her boyfriend around adoring fans. "I went through a phase when I was really mean because I was so fed up,” she said. “Girls were running after him, and I was giving them death stares.” As the HSM franchise exploded, Efron became the center of many young fans’ worlds (mine included). This added stress to a relationship that was already in the public eye.

When you take a look at the couple’s zodiac signs, it all starts to make even more sense. Efron is a Libra born on Oct. 18, which means he values harmony in romantic relationships. Libras are naturally charming and creative, and they can be very flirty, social, and outspoken. They are air signs ruled by Venus, which means they’re very idealistic, and they value physical beauty and the finer things in life. This means they can sometimes be self-centered and focused on their looks (and their partner’s appearance).

Hudgens is a Sagittarius, born Dec. 14 — a confident and honest sign that always tells it like it is. Sagittarians are optimistic by nature, and they’re also very social and charming. As a partner, they crave novelty and excitement, and they are always down to try new things. Despite the casual and light-hearted way they present themselves to the world, Sagittarians have a deeply idealistic desire to make the people around them happy, and to seek a partner who makes them happy as well.

Because both signs are so creative and outspoken, a Libra-Sagittarius couple is likely to enjoy an intense and satisfying sexual relationship. They’ll both speak up about their desires and continue to experiment together in the bedroom, and they’ll always be the life of the party in social settings. The Libra partner can provide a stabilizing presence that keeps the Sagittarius partner calm and content.

Things get trickier for this couple when it comes to trust, and the passion in their relationship comes to a head when they get upset with each other. If each partner is not careful to communicate their feelings openly, they may take out their anger on one another in unhealthy ways — feelings of jealousy and suspicion. And because each partner is dominant and idealistic, their fights can feel like a power struggle or an unattainable quest for perfection in the relationship.

Hudgens and Efron had a lot going on professionally when their relationship began, and being in the spotlight couldn’t have been easy for their private life as a couple. If their zodiac signs are any indication, the constant media scrutiny and obsessive fans might have taken a toll on their bond. And with both of them at the top of their game in Hollywood, it’s likely they butted heads.

Sadly, the stars were never aligned for Zanessa to make it in the long haul. And while it’s totally possible for couples to thrive in spite of their weak astrological compatibility, it looks like these two just weren’t meant to be. Hudgens is happily dating Austin Butler, and Efron has been linked to several girlfriends since his relationship with Hudgens ended.

I guess I’ll have to settle for Troy and Gabriella’s movie romance instead, which is a sacrifice I can live with. After all, real life Zanessa didn’t serenade each other across the basketball courts of East High School, or on a golf course, or in a treehouse… you get the picture. Hudgens and Efron (or their characters, a least) live on forever in our hearts and on our screens.