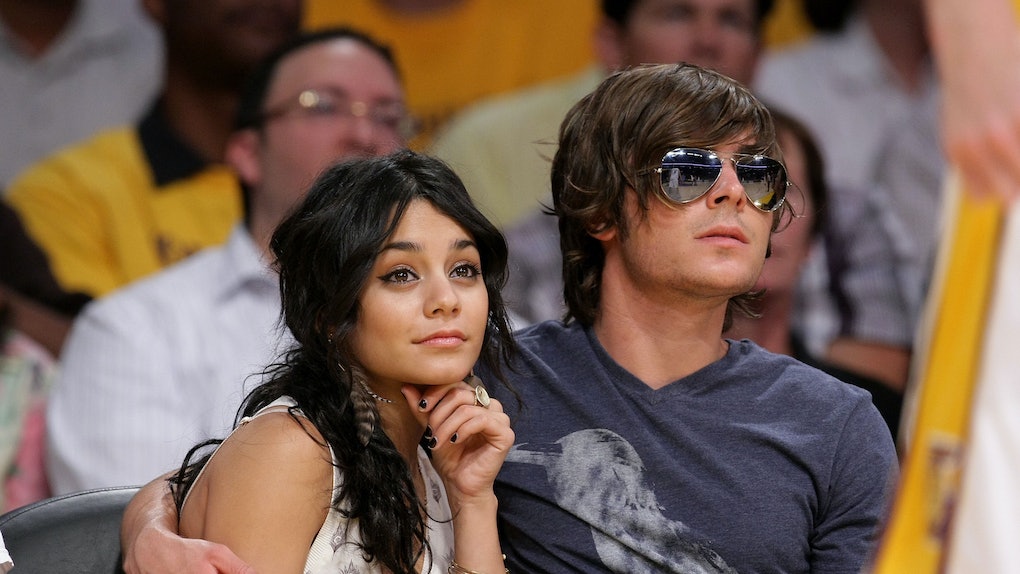 If you grew up during the High School Musical era, chances are you were totally obsessed with Vanessa Hudgens and Zac Efron. And TBH, the fact that they ended up dating in real life only added to the addictive appeal of the movie franchise. Even though their relationship ended way back in 2010, that doesn't mean we aren't still a tiny bit invested in the secrets of their iconic on and off-screen romance. Vanessa Hudgens and Zac Efron's body language suggests that like most couples, they too had their ups and downs.

Although celebrity relationships oftentimes seem perfect from the outside, it's hardly a secret that every relationship has high and low points. Based on their body language, it appears that there may have been some distance between Hudgens and Efron that signaled their split was imminent. For those who forgot, the on-screen pair started dating IRL in 2006 after meeting on set, and continued to date for almost five years. To better understand the dynamic between Hudgens and Efron, I spoke to relationship expert and author of Persuasion Point: Body Language for Speech and Influence, Traci Brown. Surprisingly, according to Brown, the body language between these two was strained at times. Here's more of what she had to say.

"This is not the pic[ture] of a close couple," Brown tells Elite Daily. "There’s a big size gap between them, they’re holding hands but just barely. He’s not smiling and she barely manages a smile." While we don't know exactly what was going on behind closed doors, a lack of closeness is never ideal. These two definitely don't scream "love" in this photo.

2. Vanessa may have been guarded.

It's true, not everyone finds basketball enthralling, but Hudgens' forlorn facial expression is hard to overlook. "Again, they’re not really happy here," says Brown. "She’s got her arm up, guarding against him, and while his arm is around her, it’s certainly not pulling her close."

3. They also had their ups.

Fortunately, they did share some genuinely connected moments over the course of their public appearances together. "They look like they’re doing pretty well here," observes Brown. "Gently facing each other with their shoulders and feet, but he’s still expressionless and she’s just a tad happier."

Hudgens has been open about her breakup with Efron, and while she's said on a couple of occasions that they're no longer friends, that doesn't mean we'll ever forget about Gabriella and Troy's epic love story.

4. In the end, they weren't able to bridge the gap.

"Finally we see expression from him, but there’s still a big gap between them," notes Brown. "And her left arm must be behind her — not around him." At the time of their split, a source close to the couple revealed that the breakup wasn't too messy. “It [was] nothing dramatic," the source reportedly told E! News. "There [was] no third party involved.”

Sadly, it looks everyone hoping for a reunion romance probably won't get one. The truth is that sometimes, when a relationship's over, it's really over. That said, we'll always have HSM to look back on, so all is not lost.