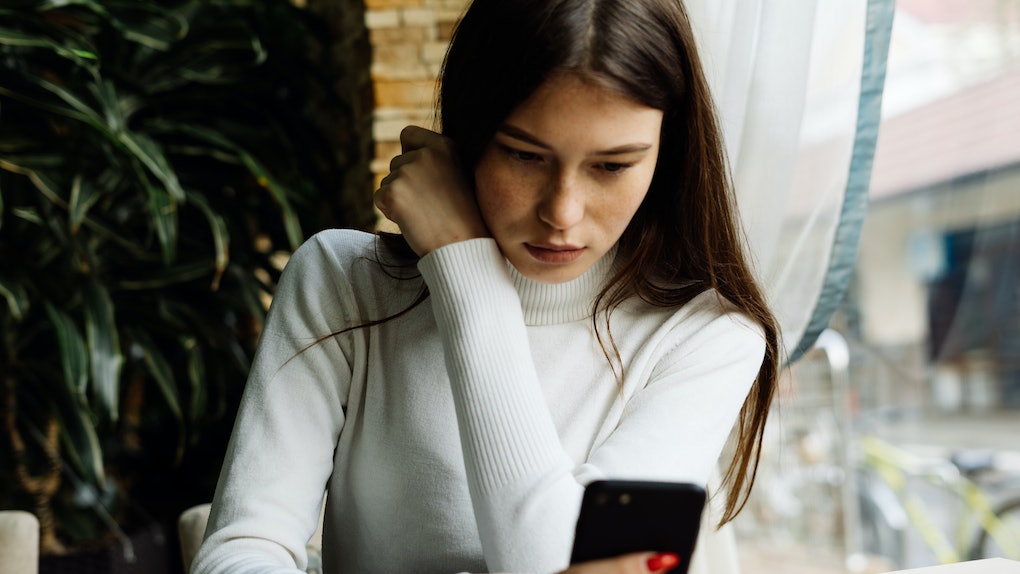 Uncomfortable With Your Partner Liking Other People’s Photos On IG? Do This

When it comes to relationships, social media can be both your best friend and your biggest foe. On the plus side, it allows you to post adorable pics of you and bae on your vacay in the Grecian islands. On the minus side, you’re forced to notice when your partner double-taps a questionable pic. If you’re uncomfortable with your partner liking other people’s photos on Instagram, you’re definitely not alone. In fact, Susan Trombetti, matchmaker and CEO of Exclusive Matchmaking, says that clients approach her with this common issue all the time. And fortunately, you don’t have to just stew in your frustration — there is something you can do about it.

First, it’s important to recognize that what you’re experiencing is totally understandable. Trombetti notes that feeling a tad jealous in your relationship from time to time is normal, and seeing that your SO liked a sexy selfie is the digital equivalent of watching them check someone else out on the street. It might stoke some insecurities, causing you to question whether they’re satisfied with who they have, or worse, trigger some fear that they might be cheating. But before you get carried away with presumptions about why they’re liking those photos, it’s crucial to have a conversation with them. While mindlessly scrolling through their IG feed, that double-tap could easily be a meaningless gesture. And by confronting the issue head-on, you give them an opportunity to explain their actions, while also letting them know how much their social media behavior has been bothering you.

“You have a right to be uncomfortable,” says Trombetti. “They might say if there was anything to it, they wouldn't be liking the pictures to begin with, but I find it disrespectful to you and the relationship. It's one thing if it's a friend, but it’s totally different if they are liking hot pics of Instagram models.”

You may feel a little awkward broaching this subject with your SO, but the reality is, you’ll probably feel far more awk if you continue to observe this behavior without bringing it up. The key is to delve into the discussion by starting with an “I” statement, as that's less likely to put your partner on the defensive. So, rather than saying, “You always like other people’s photos and I’m not OK with it,” which might feel like an attack, consider approaching the convo with an observation and a question. For example, you might say, “Hey, I couldn’t help but notice that you’ve been liking some other peoples’ pics lately, and to be honest, it makes me feel [XYZ]. I’d love to understand why you’re doing that if you know I can see it. Can you explain?”

Once you’ve given them an opportunity to share their perspective, you can let them know that it would mean a lot to you if they could refrain from those likes in the future. Making a simple request, rather than giving them an ultimatum, is generally more effective because it's a positive ask rather than a pressure-filled one. And if your partner really cares about how you feel, then they’ll surely make an effort to stop doing something that’s been bothering you.

In an ideal world, your SO would apologize for making you feel uncomfortable, and instantly adjust their ways. However, if your partner either becomes overly defensive and refuses to make a change, or promises to behave differently and then fails to follow through, Trombetti says those are both red flags. At that point, you’ll need to dig deeper into why they might be refusing to meet your request, as well as how important it is to you that they stop liking other peoples’ photos. Is it something you can live with amidst no other commitment or fidelity problems? Or is it going to keep irking you, potentially breeding resentment? These are the kinds of questions you should ask yourself.

Of course, Trombetti notes that you can also try bringing the subject up one more time, in an equally calm and non-accusatory way.

“A partner should make your concerns a priority in their life,” she tells Elite Daily. “If they still refuse to change, that tells you that they aren’t prioritizing your feelings, which is a red flag. You can see how they will react to bigger things in a relationship.”

A few things to keep in mind: Your feelings are 100% valid, your partner’s likes may actually be meaningless, and it’s well worth having an open convo to clear up any potential misunderstandings and make sure you’re on the same page. A like may just be a thoughtless move, but that doesn't mean you should suffer in silence if it's having an effect on you. And if your boo knows just how much this habit is irking you, hopefully, they can resist hitting that heart icon next time they’re scrolling through their feed.

Unfortunately, you can’t control your SO’s behavior on social media. All you can do is be totally honest with them about how it’s affecting you, listen with an open mind to their side of things, and hope that they’ll prioritize your feelings over acknowledging someone else’s photo. Now that’s worthy of a double-tap.