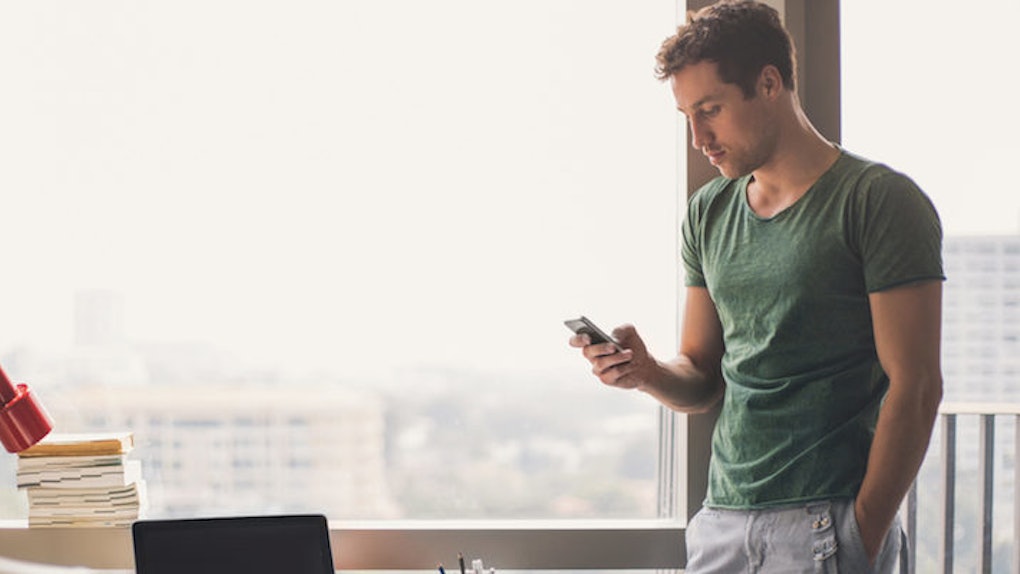 You wake up, and you check your social media accounts.

(That's what you do every morning, right?)

"Who is this dude? Instadamn."

You double tap, and then you immediately get a text from your significant other filled with rage.

An argument ensues, and you realize you maybe shouldn't have "liked" that Instagram photo.

I don't expect everyone to agree with the answer.

Take a moment to clear your head.

Stop thinking about all of the reasons liking someone else's Instagram photo is wrong.

Think about you. Why do you like a photo?

We're going to take a good, hard look at both sides of the story.

Then, I'll give you the rundown on how to deal with it.

Prepare yourselves for some truth.

Let's start with the person who "liked" the photo.

Regardless if you are male or female, you "like" Instagram photos because you are visually stimulated by what you see, and you are expressing that feeling with your fingers.

Video of that insane touchdown by Michigan State? Visually stimulated.

Hot girl? Guy with his shirt off?

Once you scroll past that photo on Instagram, my guess is that you're not thinking about it anymore.

You liked it, and you moved on.

It's not stuck on your brain for the entire day.

So for one second, you were attracted to someone else.

But let's be realistic; Instagram isn't the only place to catch visuals of attractive people.

If you think getting mad at your boyfriend or girlfriend for double tapping a photo is going to solve your problems, you're wrong.

Because he or she will see attractive people outside of Instagram.

Your SO will notice, and that's completely normal.

That's a human thing to do.

Before you act, think.

Are you mad for the right reasons?

Or, do you have areas of confidence within yourself to work out first?

Make sure you aren't overthinking or overreacting to a situation, especially if you know your significant other is loyal and treats you well.

Remember that "liking" a photo on Instagram is just a compliment.

It doesn't declare one's feelings for someone else.

It doesn't make a statement about how your SO feels about you.

It's not a public announcement that your SO wished you looked more like the person in the photo.

"Liking" a photo doesn't define how your SO feels about your relationship.

But there's a line, and it's fine.

It's so fine that you can hardly see it.

When does "liking" become disrespectful? When do you have a right to be upset?

We can't help our animal instincts, but we can control them.

"Liking" something is clearly a compliment, and everyone knows that.

So, one compliment is cool.

But if you're purposely going out of your way to get someone's attention, you're crossing the line.

If you go to someone's profile and mass-like 20 of his or her best photos, then your significant other has a right to be upset.

I mean, wouldn't you be?

That's the equivalent of standing in a public place, waving your hands around and saying, "Hey! Notice me! I think you're hot!"

The person receiving the mass-likes is being signaled that you're interested.

That's not really appropriate when you're in a relationship.

Another line that is often crossed is the type of photo being liked.

Even if you "like" one photo that focuses on another girl's butt, I'm going to feel disrespected.

It's not because you liked the photo, but because you made the choice to physically express your feelings about it.

Advice: There has to be a middle ground.

Ladies, understand that men will be men, and they will be attracted to curvy bodies because of science.

Guys, women will double tap Channing Tatum-like bodies and man buns because that's just how we are.

For a moment, we are engaging in social media, and after that moment, we continue to scroll.

But when it becomes disrespectful, that's when you answer with "not to like."

Long story short, if you wouldn't express it in real life while you're in a relationship, don't do it on Instagram.

If you wouldn't compliment a guy 20 times in a row while your boyfriend isn't around, don't mass-like his photos on Instagram.

If you wouldn't tell a girl she looks fantastic in real life while your girlfriend isn't listening, don't "like" that photo on Instagram.

Just respect the person you're with.

This is a changing world, and social media is becoming a huge part of our lives.

It might not be real life, but in this world, it controls everything real around us.