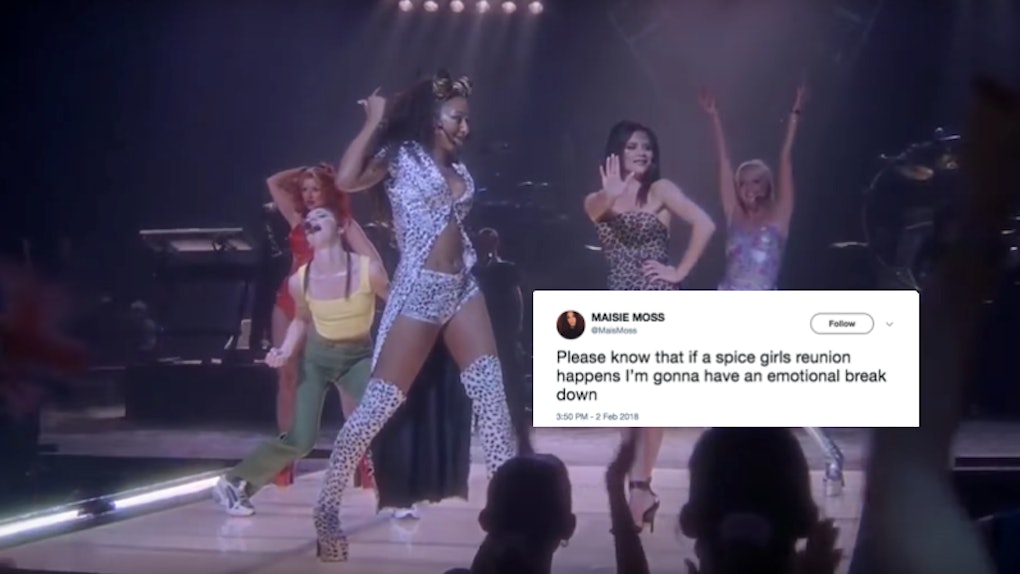 Hey, how's your day going? Just OK? What if I told you that I could make your day infinitely better with just two words? Would you believe me? Let's try it: Spice Girls. YUP, you know the ones. Your heart is already racing, don't lie. And now, one Spice Girl has gifted us all with a new photo of the whole gang. That's right, Victoria Beckham's Spice Girls photo shows Sporty Spice, Scary Spice, Baby Spice, Posh Spice, and Ginger Spice REUNITED AND I CAN'T BREATHE.

UPDATE: The Spice Girls have given a statement in response to the overwhelming love from fans after their reunion photo was posted. The statement, given from Victoria Beckham's publicist Jo Milloy to Entertainment Weekly, says, "We have enjoyed a wonderful afternoon catching up and reminiscing about the amazing times we have spent together. We are always overwhelmed at how much interest there is across the whole world for The Spice Girls. The time now feels right to explore some incredible new opportunities together. We all agree that there are many exciting possibilities that will once again embrace the original essence of The Spice Girls, while reinforcing our message of female empowerment for future generations."

EARLIER: Beckham (aka Posh Spice, but you already knew that) took to Instagram and showed fans that she, Melanie Brown, Melanie Chisholm, Emma Bunton, and Geri Halliwell were all just pallin' around, hanging out. You guys, I am living for it. Though we can't tell where they are by the looks of it, I'm hoping that it's maybe some quaint cottage outside of London, because that feels very much like a thing the Spice Girls would do.

Just sip some tea, talk about how they are all fantastic millionaires who deserve everything they've ever had, and maybe have a biscuit or two. You know, sort of like what the average group of gal pals so often do.

But whatever the reason they're getting together, WE DO NOT CARE, because all we care about is this perfect photo of the five of them:

Love my girls!!! So many kisses!!! X Exciting x #friendshipneverends#girlpower

Permission to freak the eff out now?

Is this news not SPICING UP YOUR LIFE?

The future is so bright. So spicy.

Many fans were like, "GET BACK TOGETHER, please and thank you."

Could we even handle a Spice Girls reunion? Or would we all just implode from excitement and overwhelming happiness?

Unless you lived under a rock throughout the entire decade of the '90s, you'll know that the Spice Girls were formed in 1994 and had the BEST songs, like "Wannabe" and "Spice Up Your Life," and basically defined the term "girl power." They danced, they sang, they wore wacky and amazing outfits, and they rocked our whole damn world. Here were five women who were the ultimate squad, celebrating and empowering each other in a way that wasn't exactly seen before. It was, by all accounts, liberating AF:

The Spice Girls became so popular that they even had a movie, Spice World , a film which recently celebrated its 20-year anniversary. Honestly, that movie was so, so deserving of a Golden Globe. Talk about getting snubbed.

For its anniversary, the Spice Girls' Facebook page announced that Spice World would be playing once more in theaters (which caused for mass celebration), but sadly, was only applicable to U.K. fans:

So sad that the United States didn't catch on to this, but I'll still take what I can get at this point.

Now, each of the five women are in very different stages in their lives (one was an X Factor host, one's married to David Beckham, etc.), but it's so heartwarming to see that they could all come together once more and find the time to shake it to the left and shake it to the right as a group.

(No, I'm not sorry that I keep adding Spice Girls lyrics into each paragraph, so you're just going to have to deal with it.)

And, while everyone had a favorite Spice Girl (mine was and will forever be Ginger Spice), nobody can deny that when the five of them together, there is nothing more pure. Viva forever, Spice Girls. Viva forever.

More like this
Who Plays Jamie In 'Cruel Summer'? You've Seen Froy Gutierrez Before
By Rachel Varina
These Tweets About BTS' 'Bang Bang Con 2021' Sum Up The Epic Performance
By Cianna Garrison
17 Tweets About Simu Liu In The 'Shang-Chi' Teaser, From Proud 'Kim's Convenience' Fans
By Dylan Kickham
Stay up to date