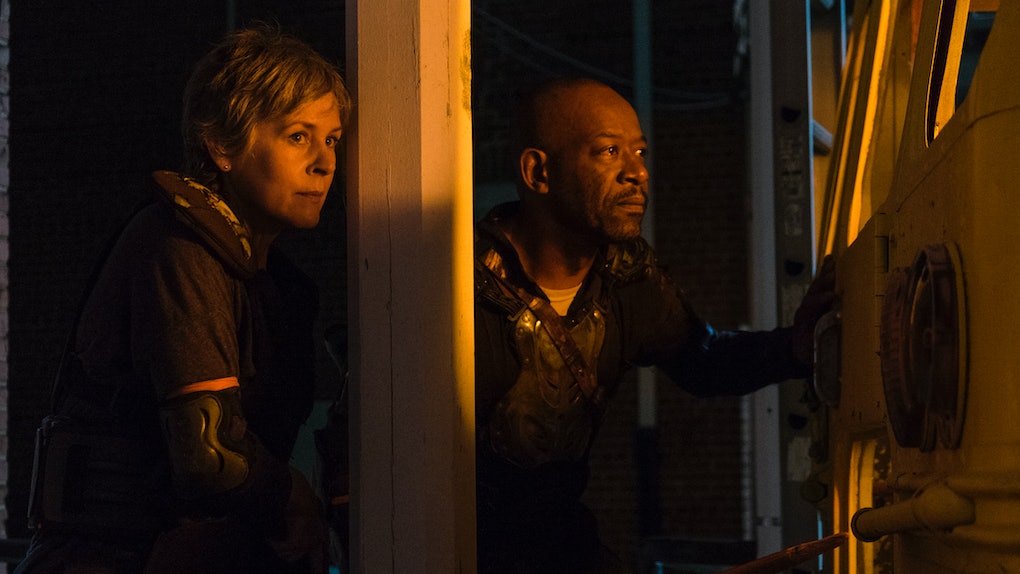 Fans of The Walking Dead have waited long enough for the return of their favorite show, and Sunday night was the triumphant midseason premiere episode that we've all been waiting for. At long last, everyone's favorite zombie apocalypse program has come back into our lives and I could not be happier. The Feb. 25 episode was truly a standout among the rest — and fans seem to agree. The tweets about The Walking Dead's Season 8 midseason premiere run the full gamut of emotions.

The midseason premiere was definitely different from the previous episodes of Season 8. We're usually used to a lot of deaths and intense action scenes on The Walking Dead, especially given that this season has been dubbed the "All Out War" season. But we had a break from that on Sunday and witnessed an episode that went at a much different pace when compared to others. That's not to say that it wasn't as emotionally charged — and this episode may in fact have been one of the most heartbreaking ones in the show's history, as we all expected considering where the season left us.

In the previous episode, there was a lot going on. Negan and his team had just raided and basically destroyed Alexandria, and Rick and Michonne were left to pick up the pieces. They wound up finding Carl — to many fans' relief. But Carl then showed us that he had suffered from a zombie bite, which we know meant that he was as sure as dead. It wasn't clear that he would be dying in the upcoming episode, and some viewers were hoping that he'd somehow be able to make it out alive. But one of the earliest scenes in the episode showed Carl seeming to prepare for his death, spending time with his baby sister and writing letters for the people he'd leave behind. As soon as that happened, fans took to Twitter to show just how devastated they already were.

As the episode went on, it became more and more clear that everyone's fave teen zombie killer would not be getting a reprieve. It quickly began to look like the entire episode was essentially dedicated to saying goodbye to Carl Grimes, which is very uncharacteristic of this show that's known for brutally killing off its characters. So when we basically had an entire hour to say goodbye to Carl, it felt like the show had finally given us a death that does the character justice.

Because we pretty much knew he was good as gone. Chandler Riggs, the actor that portrays Carl, was satisfied with the way we saw his character go. “I was very happy with the way Carl ended up going out,” Riggs said in an interview with ComicBook.com. “After reading the script, it made me feel a lot more comfortable with it and really excited to really show off what I can do in this last episode. This last episode it was some of the stuff that I’m most proud of." Fans seemed to be proud of him too.

It truly was Carl's episode, and the way that it was written was absolutely beautiful and definitely did his character and the character's legacy justice. But let's not forget about some of the other key players on this show — namely King Ezekiel. When we last left him he was captured by the Saviors and the fate of his character was unknown. We weren't sure if he was going to be killed by Negan or by Gavin, who assured viewers (and Ezekiel) that he would make an end to Ezekiel, so of course everyone was nervous.

Of course, we couldn't be too worried about Ezekiel, since two of the most badass people on The Walking Dead were out to save him: Carol and Morgan. Even as the Saviors threatened the king every few minutes, fans were just waiting for that unstoppable duo to go get him.

Yet even with all of that suspense and action, the top prevailing emotion for fans on Sunday night was pure heartbreak. Carl getting bit is easily one of the most difficult things we've had to go through on this show's eight-season history.

So there was definitely a lot to take in. A lot of emotional weight was given to this midseason premiere, and it was a nice little break from all the severe blood and gore that we've seen in episodes past. But because this is The Walking Dead, I'm sure that there is still a lot to happen in these next upcoming episodes this season. Dead is finally back, and Sunday nights just got a little bit better.