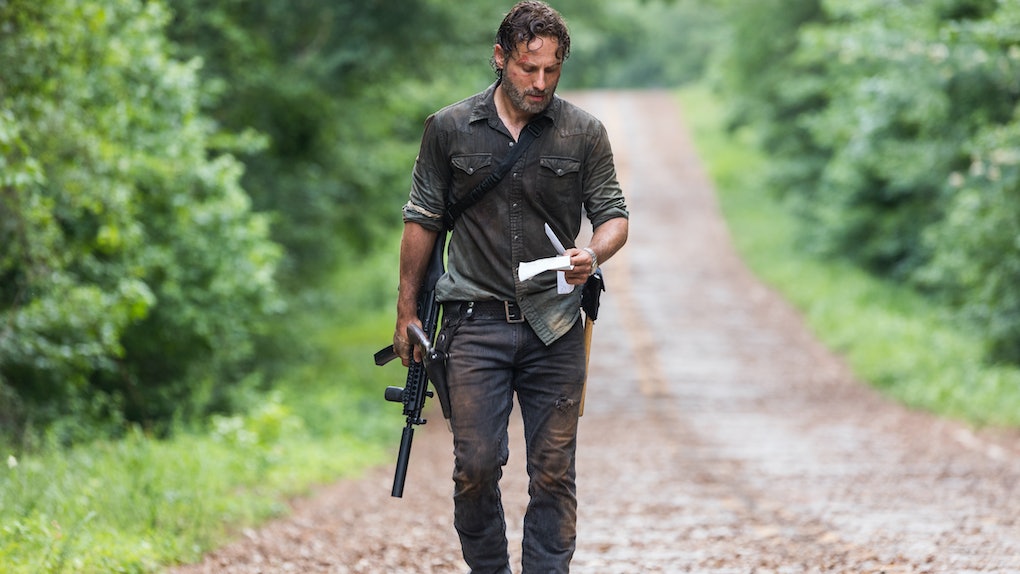 The Walking Dead, why do you do this to us? The upcoming Episode 8 of Season 8, “How It’s Gotta Be,” aired its promotional trailer on Sunday night immediately after Episode 7 "Time For After", and already fans are terrified. Tweets about The Walking Dead’s mid-Season 8 finale are shook after the promo promised a “shocking” moment. On this show, we know that only means one thing. Someone’s gonna die.

The official description of the 90-minute episode for next week says what to expect (kind of):

Every story and battle from the first half of the season comes crashing together in this action-packed, emotional mid-season finale.

“Action packed?” “Emotional?” We know what that means, and it’s nothing good.

The promotional trailer itself wasn't exactly reassuring — with snapshots of a firefight that forces Rick and the Scavengers to take cover, and Carl talking about "all [they] need to do is survive tonight," it definitely looks like something will go less than swimmingly.

Pair this with the fact that in tonight's episode, Rick made a deal with a notoriously unreliable set of allies (seriously, they already betrayed you once, what makes you think trying again a good idea?) and saw his plan to trap Negan and the Saviors inside the walker-surrounded Sanctuary go down in flames, and it's not looking good for Rick's side.

So of course, all of that combined with the fact it's the mid-season finale, plus the hype about a moment that will have "everyone talking," and Twitter started freaking out over their faves.

Fans are probably right to worry. The Season 7 mid-season finale, "Hearts Still Beating," basically launched the war with the Saviors and Negan which has since become the "all out" war of Season 8. It also saw a solid number of deaths, including that of Spencer Monroe, who was rather gruesomely disembowled by Negan for, ironically, attempting to betray Rick. So yeah, there's a solid chance that we're going to see some major drama in the next episode.

And of course, if we want to get all meta textual and break the fourth wall in our discussion, there's definitely a reason to worry about character deaths — and one death specifically. In late November, showrunners revealed that Morgan would be making a transition across shows to become a crossover character on spinoff show Fear The Walking Dead. And of course, the question thus becomes what will happen to Morgan on The Walking Dead proper? (Hint: probably death.)

Of course, Morgan isn't the only option. The sneak preview scene showed a a troubling situation for Maggie and Jesus as they drove down a dark, lonely road and talked about the state of the war — and whether the Saviors were going to surrender, or whether they were planning anything against them. Seriously, nothing good happens on a dark, lonely road at night.

So yeah, there are kind of a lot of characters who might not be long for our screen. It's a show that is literally about dead people (walking), so basically anyone is fair game.

And people were worried.

And some people were just, honestly, not that worked up about it.

But seriously, what scares me most thinking ahead to next week is how relatively chill this episode was. It's kind of a fact of cliffhanger heavy TV shows that if the episode ended without a huge moment, that the next episode is going to be epic. That, more than anything, is what has me biting my nails.

So what will happen next week? Only the showrunners know, I guess. But if you haven't already learned your lesson about getting attached, I wouldn't start now.

More like this
Simu Liu's Tweets About The 'Kim's Convenience' Finale Promise "Tea & Receipts"
By Dylan Kickham
Who Did Emily Poison? 'The Handmaid's Tale' Season 2 Is Off To An Intense Start
By Ani Bundel
In 'Riverdale' Season 5, Toni Topaz Is The Black Superwoman Without A Cape
By Erika Hardison
Stay up to date