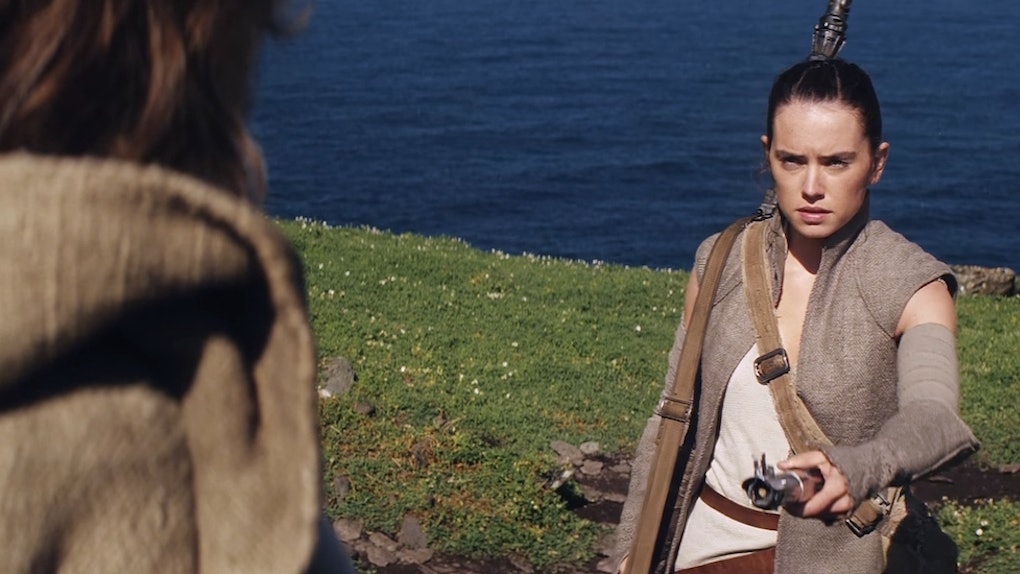 The next chapter in the Star Wars saga is finally here, and it is getting a massive amount of love from fans. Star Wars: The Last Jedi premiered in theaters on Thursday night, and just as you would expect, Twitter became pretty much nothing but reactions to the bombastic new movie on Friday. If you weren't already convinced to get to the movie theater to see it, let these tweets about Star Wars: The Last Jedi encourage you to make the trip to a galaxy far, far away at light speed.

In case you didn't already know (you probably did), The Last Jedi is Episode 8 in the sprawling Star Wars space opera, following up 2015's The Force Awakens, which introduced a new generation of characters such as the young Jedi Rey, the runaway Stormtrooper Finn, the ace Resistance pilot Poe Dameron, and the villainous Force user Kylo Ren. That intro movie to the new trilogy ended with Rey discovering her power to control the Force, and finding Luke Skywalker on an abandoned planet after years in self-inflicted exile. Now, Rey will learn the ways of the Jedi from Luke, and also finally get the answer to the question that she and every fan has been guessing at for two years: who are her parents?

Star Wars famously has a spotty history, with some movies becoming fan-beloved classics and others that even diehard fans don't like to speak of, but it sounds like The Last Jedi is one of the franchise's biggest successes. Just check out these super pumped tweets from people who have already seen the movie (of course, no spoilers included):

If that doesn't make you want to see The Last Jedi I don't know what will. And it's not just fans that are going crazy for the new movie — critics are also praising it as one of the best Star Wars movies ever. Most fans and critics held 1980's The Empire Strikes Back as the best Star Wars movie before now, but now there people saying that The Last Jedi may be giving Empire some competition. The comparison is expected, since The Force Awakens was so clearly mapped onto the framework of 1977's introductory Star Wars movie A New Hope, so fans were expecting its followup to include some hints of Empire in it.

Along with bringing back old favorites like Leia Organa and Luke Skywalker and further developing the new generation of characters, The Last Jedi is also introducing a host of exciting, brand-new characters into the franchise. A purple-haired Laura Dern is playing Amilyn Holdo, an old friend of Leia's that joins forces with her Resistance, Kelly Marie Tran plays a Resistance maintenance worker named Rose Tico who joins Finn on his adventure, and Benicio del Toro portrays a fearsome underworld creature named DJ. While all of these new additions are exciting, it's the new space creatures that has a large segment of the fanbase most excited. Cute little hamster-puffin creatures called Porgs are already invading Twitter and are sure to do the same in stores when all the merch comes out, and fans of the less cutesy critters are already loving the crystalline ice foxes in the new movie.

But of course, the real reason to see The Last Jedi is to get the answers to all the pressing questions Star Wars fans have been waiting years for: Who are Rey's parents? Why did Luke Skywalker exile himself, and what has he been up to? Will Luke and Leia finally reunite? How does the Force even work?

To find out, you're going to have to see The Last Jedi for yourself. It's in theaters now.