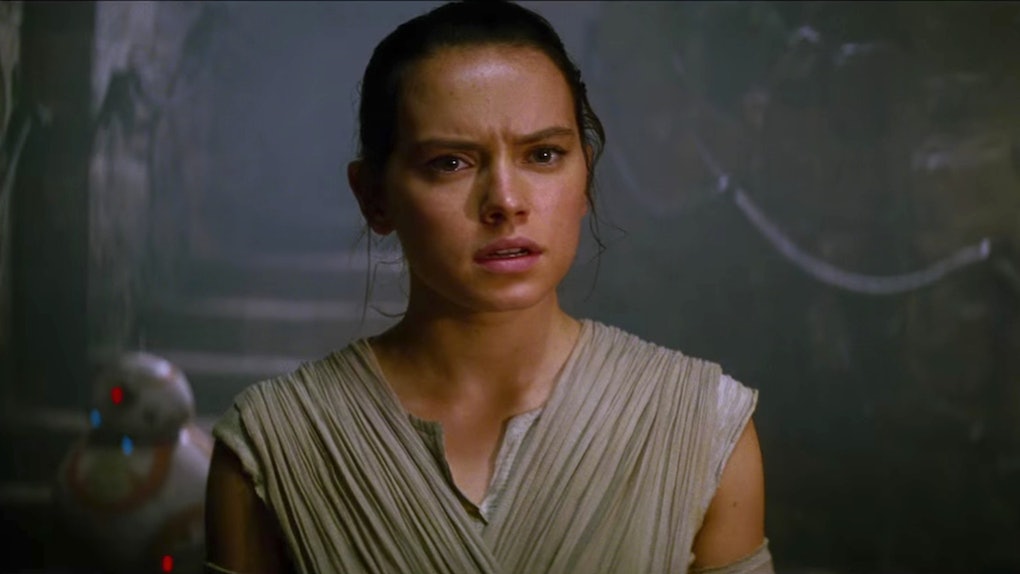 Who Are Rey's Parents? 'Star Wars: The Last Jedi' Will Reveal The Mysterious Truth

Star Wars fans are finally about to get the answer to the questions that's been plaguing them for two years when The Last Jedi comes out next week, but to kill the excruciating time we have to wait until then, let's try to predict the answer for ourselves. Of course, the question I'm talking about is who are Rey's parents. The protagonist of the new saga is still not officially connected to any of the OG main players, but one theory about Rey's parents in Star Wars seems to explain everything. And no, it is not the one you are thinking of. Let's get into this super convincing theory about who Rey really is so you might feel like you called it when you see The Last Jedi.

OK, so the first thing to get out of the way is the popular fan theory that Luke Skywalker is Rey's father. Yes, we have all heard this one — the ending of The Force Awakens practically beats the audience over the head with it — but doesn't it seem super suspicious how obvious this theory seems? Like, at this point, it wouldn't even be surprising if The Last Jedi revealed Luke to be Rey's father, and this is the franchise that pretty much invented the shocking paternity surprise nobody saw coming! So instead of the obvious, this new theory makes a really compelling case for a different mom and dad for Rey: Leia and Han Solo.

The Film Theorists YouTube page posted a pretty detailed analysis of all the top contenders for Rey's parents, and wound up with Han Solo and Leia as the most logical choices based on hints from the past movies. The crux of the theory comes from the fact that Kylo Ren seems to know about Rey before ever meeting her in The Force Awakens, getting angry when he hears of a girl on Jakku and asking "You still want to kill me?" at their very first meeting. The theory is that Kylo is Rey's older brother, but when their parents Han and Leia realized he was growing evil, they left Rey on Jakku in order to keep her safe from him.

And of course, Rey's abilities that we see in The Force Awakens mirror those of her parents: she can control the Force like her mother, and seems to be a natural pilot like her dad. Plus, The Film Theorists video points out that having a child would break Jedi code, which forbids Jedi from forming personal attachments. To drive it home, the video also mentions how in The Force Awakens script, the stage direction for Leia and Rey's hug says it is "a mother's embrace." It all adds up to Han Solo and Leia being Rey's actual parents. Check out the full video of the theory below:

But of course, no Star Wars theory comes without a bunch of holes. Most viewers responded to the theory with confusion over why Han Solo would act so aloof to Rey in The Force Awakens if she really is his daughter. Like, he would have said something to her, wouldn't he? While this does seem like a pretty big hole, it could still be explained away: what if Leia had Rey in secret and decided to leave her own Jakku without ever even telling Han? Or, it's possible that Han simply didn't recognize Rey since he hadn't seen her since she was a child.

Obviously, we all still have questions about Rey's real parents, but the answers are coming soon, when Star Wars: The Last Jedi opens in theaters on Dec. 15.