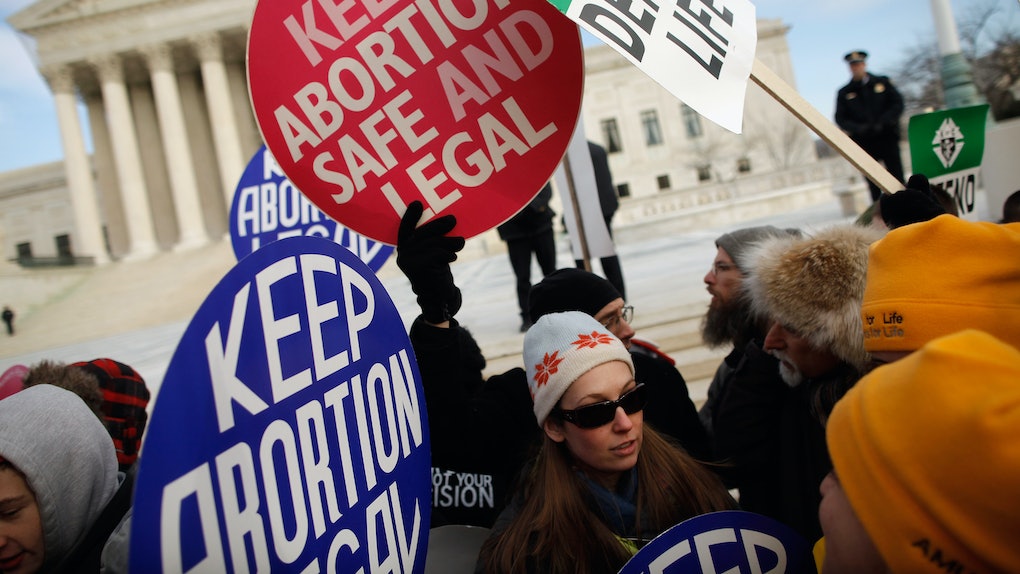 Only days after the new year began, Rep. Trent Franks (R-AZ) introduced H.B. 36, a 20-week abortion ban bill called the Pain-Capable Unborn Child Protection Act — and that bill passed the House on Tuesday, Oct. 3. It's one of a large number of bills introduced in the past few years that attempts to limit legal abortion under the guise of protecting fetuses from feeling pain. The problem? 20-week abortion bans are based on junk science. And abortion provider and researcher Dr. Daniel Grossman put together a comprehensive Twitter thread on why 20-week bans don't make scientific sense.

On Twitter, Rep. Franks, who is the chairman of the Pro-Life Caucus, explained why he proposed such an unforgiving ban: because, he said, fetuses are able to feel pain at 20 weeks, which makes so called "late-term" abortions cruel.

"Ample evidence from scientists that fetuses feel pain at 20 wks," he wrote. He cited the questionably scientific website doctorsonfetalpain.com — which has no "about" page, no contact information save for a generic Gmail address, and dubious citations to back up its claims — as supposed evidence that fetuses can feel pain beginning around the 20-week mark. In fact, one citation the website uses as evidence of early fetal pain even notes, "[The authors] believe that pain requires conscious cortical processing, which they deem unlikely until 29 or 30 weeks."

Grossman should know: he's an abortion provider, and the leading reproductive health researcher and director of University of California San Francisco's Advancing New Standards in Reproductive Health (ANSIRH), a research body that conducts studies on issues related to sexual and reproductive health.

Grossman started by discussing what anti-choice advocates call "late-term" abortion. "Anti-abortion advocates made it up," he tweeted, in order to create the illusion that these procedures are done late in fetal development, thereby increasing the stigma.

In fact, Grossman argued, keeping abortion legal after 20 weeks is essential for many women, and banning it after an arbitrary amount of time is cruel for several reasons.

Dr. Kristyn Brandi, a Los Angeles-area OB-GYN and abortion provider, as well as a fellow with Physicians for Reproductive Health, echoes Dr. Grossman's sentiments. She pointed out that spreading accurate information is important for both patients and providers.

"When I care for a women's specific medical needs, I want to make sure that I am doing the right thing based on the best evidence we have. Every patient wants and deserve the best evidence-based care available," she wrote in an email to Elite Daily. "By making decisions about medical care based on junk science, we are putting our patients and doctors in dangerous situations where patients could be denied necessary care because of an arbitrary law."

And blocking care could have tragic effects.

Grossman additionally noted the pain a ban like this would cause living, breathing women — and their families, in some cases.

A 2009 report released by the Centers for Disease Control and Prevention (CDC) shows that only 1.3 percent of all abortions are performed after 21 weeks. But it is essential to keep those abortions legal and safe—which go hand-in-hand.

A Guttmacher Institute study from 2005 gives an incomplete but illuminating picture of why women have abortions. 13 percent of women stated fetal health as a reason, while 12 percent cited personal health problems. Combine that with the fact that, according to Planned Parenthood, a significant number of health problems (whether fetal or maternal) either don't present themselves until the second trimester (starting after 12 weeks) or become worse as pregnancy progresses, it's imperative to prevent time-based bans.

Women's health, not politics, should be what drives medicine.

But maternal and fetal health shouldn't be the only reason to keep abortion legal. A Planned Parenthood factsheet on abortion after the first trimester reveals even more about why it's important to keep the door to legal later abortions open: 36 percent of women reported that they needed time to raise money for the procedure; and women cited exposure to intimate partner violence, geographic factors (such as not living near a clinic), and provider shortages as reasons they needed an abortion after 12 weeks.

Grossman stated that the best evidence available shows fetal pain doesn't start until around 26 weeks — toward the end of the second trimester—which doctorsonfetalpain.com accidentally acknowledged in one of their citation notes. Mark Rosen, an obstetric anesthesiologist at the University of California at San Francisco, corroborated this in 2005, saying that evidence of fetal pain begins roughly at the 28-week mark, according to Discover Magazine.

Rep. Franks' bill would make providing an abortion after 20 weeks a federal crime.

This bill amends the federal criminal code to make it a crime for any person to perform or attempt to perform an abortion if the probable post-fertilization age of the fetus is 20 weeks or more. A violator is subject to criminal penalties—a fine, up to five years in prison, or both.

The bill does provide exceptions for rape and the mother's life. And while it states that "a woman who undergoes a prohibited abortion may not be prosecuted for violating or conspiring to violate the provisions of this bill," going after abortion providers will have just as much of a chilling effect — if not more — on safe, legal abortions.

The Pain-Capable Unborn Child Protection Act is part of a long line of bills that have attempted to limit the definition of legal abortion.

These bills would effectively ban the procedure. There was this year's No Taxpayer Funding For Abortion and Abortion Insurance Full Disclosure Act, which would prevent taxpayer money from funding abortion. It passed the House on Jan. 24, 11 days after being introduced. The problem? 1977's Hyde Amendment already prevents taxpayer funding for abortions, save for extreme circumstances.

The House also introduced a federal "heartbeat bill" this year, which would ban abortion as soon as a heartbeat is detected—roughly five to six weeks into a pregnancy, or in other words, before most women even know they're pregnant.

Of course, despite the fact that most of these bills die, states have continued passing — or attempting to pass —prohibitively strict abortion bills.

Abortion is banned after 20 weeks in 12 states, and Utah successfully passed a bill requiring women to shell out for fetal anesthesia after 20 weeks. (The law is unenforced, according to CBS News, until doctors can figure out how to comply with the law.) Myriad states have tried passing heartbeat bills. Some have successfully passed them, only to be stopped by gubernatorial vetoes or the Supreme Court.

If Dr. Grossman's thread is any indication, these kinds of bills are bad science. Further, they're bad for women and children: states with the most restrictive abortion access have the worst outcomes when it comes to women's and children's health.

"Congress should allow medical decisions like this to be determined by the patient and their doctor instead of people with little medical knowledge," she says.

The likelihood of the bill becoming law is slim — it would have to win at least 60 votes in the Senate. But it doesn't stop providers like Brandi from worrying about future outcomes of reproductive rights.

"Despite it not yet being through the Senate, I am quite concerned about this medically unnecessary abortion ban," Brandi says. "Women's health, not politics, should be what drives medicine. I want to make sure each of my patients gets the medical care that is best for them, and laws like this put road blocks between patients and the safe, compassionate care they deserve."

More like this
These Tweets About Harris & Pelosi At The 2021 Address To Congress Cheer This Huge Moment
By Rhyma Castillo
The CDC's New Mask Guidance For Outdoors Means Shot Girl Summer Is On Its Way
By Rhyma Castillo
These Songs About Friendship Between Women Are Empowering AF
By Sydney N. Sweeney
Stay up to date