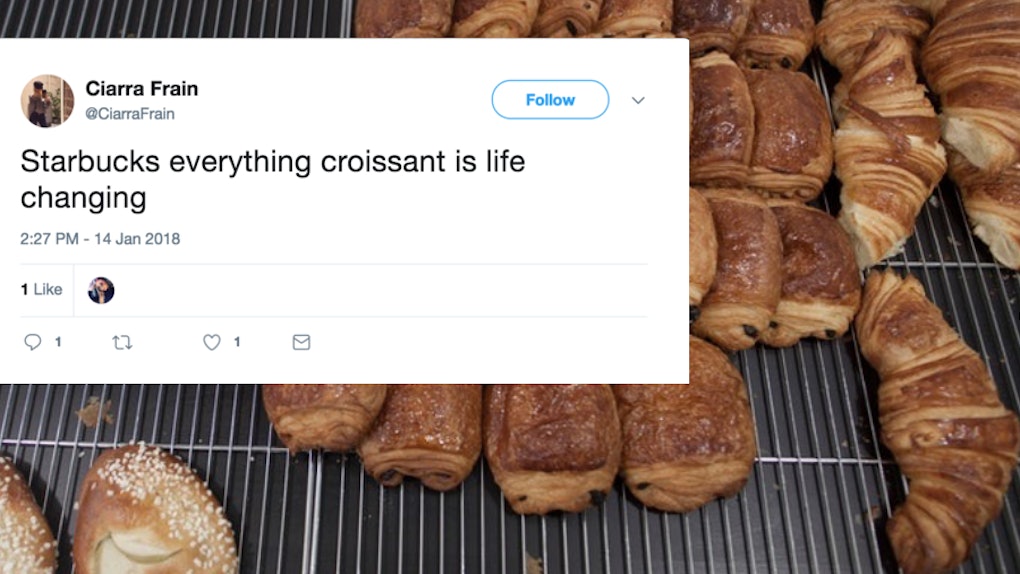 Most people have a go-to Starbucks order. Mine, for example, is usually one small soy latte and one Spinach Feta Wrap. But alas, it can change. Every time Starbucks comes out with a new menu item, my ordering patterns go totally out of whack, and I need to completely reconsider my options to avoid major Starbucks FOMO. So if you're willing to branch out and try something new, the tweets about Starbucks' new Everything Croissant might convince you to reconsider that regular order of yours.

Starbucks has successfully dabbled in the field of croissants before, and if you've ever tried their highly-esteemed Almond Croissant, then you probably know what I'm talking about. Not only are they buttery AF, but they also come out of the oven just in the knick of time. Starbucks croissants serve the purpose of that on-the-go sugar spike we want and deserve — all day, every day. So when we found out Starbucks finally revealed a new croissant flavor —which apparently tastes like an everything bagel — we were really itching for that next coffee break. So seriously, Susan, if you're going out, please pick one up for me. I'll Venmo you.

According to Starbucks' website, the croissant base is plain and buttery. It's topped with not one, not two, but three freaking cheeses: Asiago (yum), Gruyere (double yum), and Fontina (holy cheesus... wow). In addition to some crunchy onions, it's also sprinkled with the classics, which include sesame seeds and poppy seeds. Oh. My. God.

Starbucks lovers are beyond stoked for this major croissant glow up, not only because everything bagel seasoning is life, but also because some people had the miraculous idea of bringing the croissants home. That's right: Some people are making meat and cheese toasties out of them. So yeah, we now clearly know who the geniuses are in this world. But whether you like it on its own or with your a little creative twist, this new croissant is totally unreal, and we're just happy to be alive at the same time as its birth.

While most of the reactions are nothing but thrilled, some people clearly aren't true Starbucks fans (they probably aren't ready for this jelly). But in all honesty, that's A-OK, too. We completely understand that such an earth-shattering, perfect pastry might need a little time to be accepted. It can be intimidating to try something as amazing as an Everything Croissant, but it's about time that we all start to accept this soon-to-be classic Starbucks staple.

If you're one of the few who aren't enthused about the Everything Croissant idea, but you're still looking to change your Starbucks order, definitely make a point to try out their new Teavana Citrus Defender. It's a life-altering concoction of Teavana Defense Wellness Tea, brewed with some steamed lemonade, hot water, and little bit of honey. Apparently, it helps fight off those nasty winter-induced aches and pains with its high levels of Vitamin C, and it honestly just sounds hella refreshing.

However, if you're not a tea lover and the Citrus Defender sounds like straight up medicine, Starbucks just answered all of your prayers. The company brought back the seasonal Smoked Butterscotch Latte, so get excited. Resembling a certain staple Harry Potter beverage, the SBL is a delicious and sweet way to get a warm little sugar rush during the day. So whether you're craving the taste of everything seasoning, or if you prefer a new drink to add to your order, Starbies is coming in clutch with some awesome new additions.