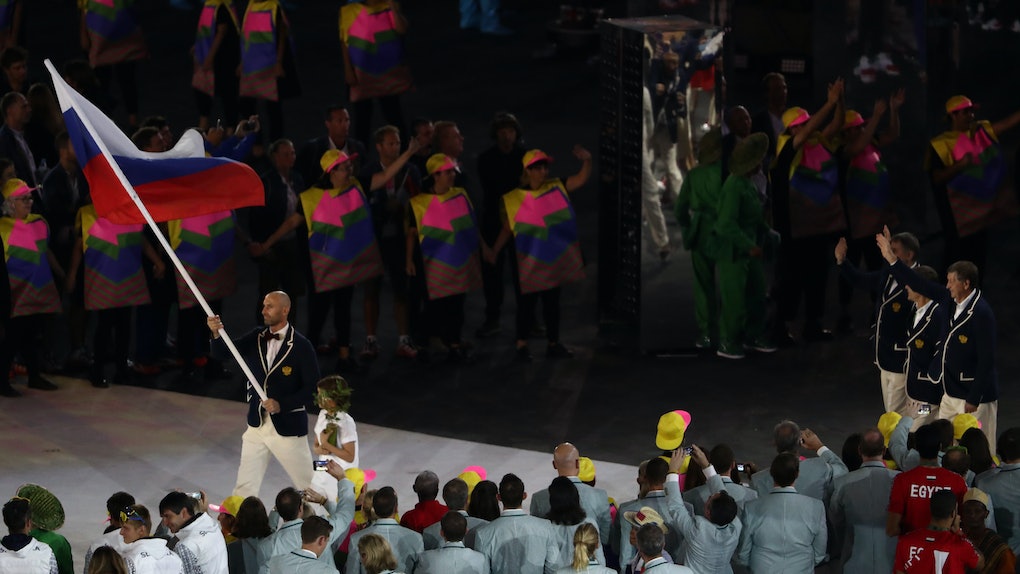 It looks like Russia is going to face some major consequences for cheating — at the Olympics. On Dec. 5, the International Olympic Committee (IOC) announced that Russia would be officially banned from the 2018 Winter Olympics in Pyeongchang, South Korea for its state-backed doping scandal. And while its Olympic cheating is clearly a major deal, everyone on social media immediately started thinking of a different Russia scandal — and the tweets about Russia’s Olympic ban and Donald Trump are already pretty hilarious.

The unprecedented ban handed down on Tuesday is a punishment after the Olympic powerhouse was found guilty of a major state-sponsored doping scandal that occurred during the 2014 Winter Games in Sochi, Russia, per The New York Times. A team associated with Russia's sports ministry reportedly tampered with 100 urine samples to hide the evidence of steroid use by Russian athletes, resulting in disputed wins and the disqualification of more than two dozen athletes. So for the upcoming games, Russia, as a nation, will not be allowed to participate. No officials, no flags, no medals, nada. (Athletes with a history of "rigorous" drug testing will be allowed to compete under a neutral uniform, per the Times.)

And of course, as you know if you've turned on a TV in the past year, that's not the only cheating Russia has been accused of. In early January, the U.S. intelligence community announced that it had assessed with "high confidence" that Russia had meddled in the 2016 election, with the intent of helping to elect Donald Trump. Since then, there have been questions around how much now-President Trump knew about Russia's efforts, and an investigation into whether or not he colluded with Russia has been picking up steam (despite Trump's ever-more-fervent denials). Trump has repeatedly implied that he doesn't believe that Russian meddling even happened, calling it all "fake news" despite the judgment of multiple intelligence agencies that it is very much real news.

So when Twitter heard about the new news about Russian cheating, everyone thought the same thing.

Considering the president's friendliness with Russian President Vladimir Putin and his apparent unwillingness to accept the reality of Russian election meddling, some people were quick to bring up the idea that Trump might be supporting a different red, white, and blue flag.

And some people just had to suppress a shudder of horror at the thought of "Russia" and 2018 (or 2020 for that matter) in the same sentence.

According to the IOC's statement about the decision, the punishment is no slap on the wrist, either. The entire Russian Olympic Committee (ROC) is suspended as well, effective immediately, and Russian officials have been booted off the commission organizing the 2022 Winter Games in Beijing as well as kicked out of the IOC itself. What's more, the ROC is being billed for the cost of the investigation into the doping scheme, and fined $15 million U.S. dollars in order to "build the capacity and integrity of the global anti-doping system."

And if the Russians don't want to accept their punishment graciously? The IOC is holding future Olympic ceremonies over their heads. The statement suggested that should Russia comply with all of the penalties, the IOC may let them participate in the closing ceremonies. The statement said,

The IOC may partially or fully lift the suspension of the ROC from the commencement of the Closing Ceremony of the Olympic Winter Games PyeongChang 2018 provided these decisions are fully respected and implemented by the ROC and by the invited athletes and officials.

There is, notably, no specific mention of Russia's eligibility for the 2020 Summer Games, to be held in Tokyo.

In any case, it doesn't look like the nation is inclined to meekly accept the consequences of the cheating. ROC President Alexander Zhukov said on Tuesday that Russian athletes would appeal the IOC's decision, according to Reuters.

Cheaters never prosper, guys. Steroids or no, you can't outrun the consequences of your actions.