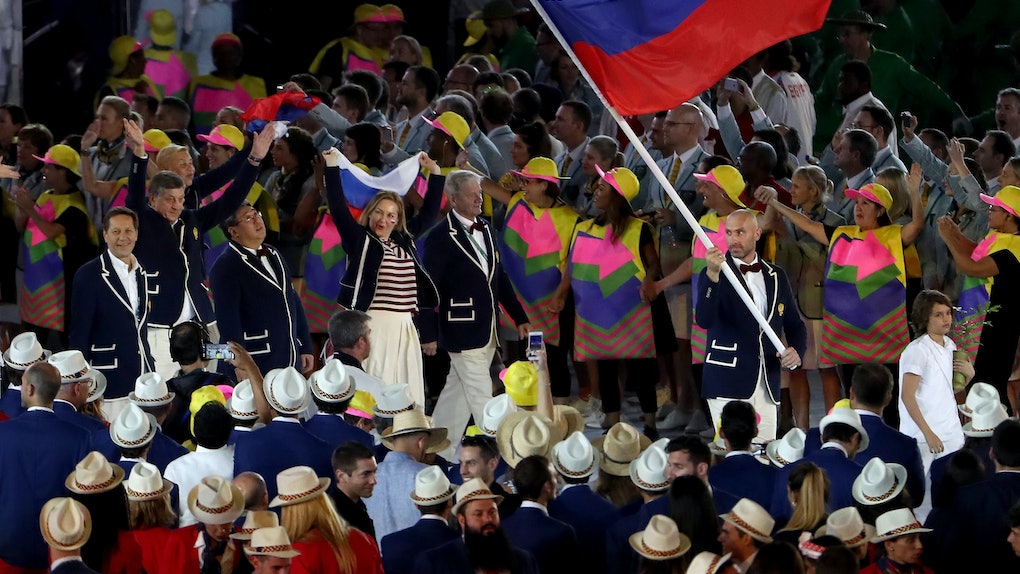 Can Russia Compete In the 2020 Olympics? It Depends

Early on Tuesday, Dec. 5, the International Olympic Committee (IOC) made a bombshell announcement that Russia is banned from competing in the 2018 Winter Olympics in Pyeongchang, South Korea. The announcement came in response to a far-reaching, state-sponsored doping program. But whether or not Russia will compete in the 2020 Olympics is still up in the air.

Whether or not we will see Russia could depend on whether or not the Russian Olympic Committee (ROC) complies with the IOC's decision, released on Dec. 5 along with the Schmid Report — the extensive review of Russia's doping program and interference with the doping lab in the 2014 Sochi games.

The committee said in a statement that if Russia complies with the numerous penalties and changes outlined in the report, they may be allowed to participate in future Olympic events. While the IOC doesn't specifically refer to the 2020 games, their announcement includes a stipulation that would allow Russia to be included in Olympic events as soon as "the commencement of the Closing Ceremony of the Olympic Winter Games" in 2018.

In other words: if Russia complies, we may well see the Russian flag at the 2018 closing ceremony — and we could likely see them back at the 2020 games.

According to the IOC's press release regarding the 2018 ban,

The IOC may partially or fully lift the suspension of the ROC from the commencement of the Closing Ceremony of the Olympic Winter Games Pyeongchang 2018 provided these decisions are fully respected and implemented by the ROC and by the invited athletes and officials.

The extensive penalties include a $15 million fine levied against the ROC in order to "reimbuse the costs incurred" by the investigations, led by IOC Inquiry Commission Chair Samuel Schmid, and "contribute to the establishment of the Independent Testing Authority (ITA)." According to the IOC, the fine will help "build the capacity and integrity of the global anti-doping system."

The committee has also immediately suspended the ROC; removed the ROC's president from the IOC; excluded Vitaly Mutko, the minister of sport who was in charge of the doping program, and his deputy minister from "any participation" in all future Olympics games; and further, the committee reserves the right to hand down additional rulings and sanctions against the country as it sees fit.

In the meantime, individual Russian athletes may apply to compete as neutrals under the title, "Olympic Athletes from Russia (OAR)" for the impending 2018 games, and they will be accepted so long as they follow rigorous requirements set by the IOC.

Russia's future at the Olympic games may be complicated by more than the IOC's penalties, however.

According to Reuters, Russia’s Olympic Committee President Alexander Zhukov announced that Russian athletes will appeal the IOC's ban, but many athletes have expressed their outrage at the ban. Some have even said they won't compete under the Olympic flag. Additionally, according to the Moscow Times, Deputy Head of Duma's Sports Committee Valery Gazzayev said, “I believe the IOC’s decision should be seen as political provocation, that’s all I can say.” And another government official, Franz Klintesich, called for a boycott and said, “A great power should not be incognito at the Olympics.”

Further, before the ban announcement, there were whispers of a Russian boycott of the games, depending on the outcome of the IOC's Dec. 5 decision, though state-sponsored news outlet Russia Today reported that there's no plan to boycott future games.

But it seems, given the negative reactions from both athletes and government officials, that it's within the realm of possibility to expect Russia to fight the IOC's ruling. Guess we'll have to wait and see how it goes.