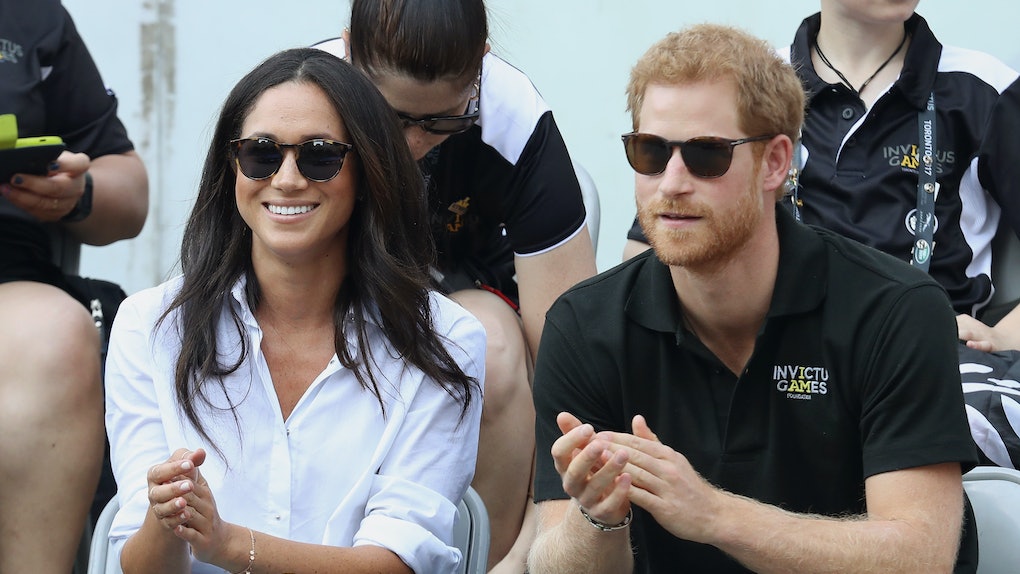 Get ready for your newsfeed to become all about the British royal family, because Prince Harry has just announced his engagement to Meghan Markle. The couple's big news was announced by Kensington Palace on Monday, Nov. 27. From the looks of the love that tweets about Prince Harry and Meghan Markle's engagement are showing, there is no doubt that they are the hottest new royal couple.

The news came from the Kensington Palace Twitter page on Nov. 27, and it was announced that the the couple "became engaged in London earlier this month." The account then began sharing well wishes for the pair from their families. Spoiler alert: everyone is pretty much thrilled about the upcoming nuptials, which will take place in the spring of 2018.

OK, back to the well-wishes for the couple. In a statement put out by the Kensington Palace on behalf of Markle's parents, Mr. Thomas Markle and Doria Ragland shared that they are "incredibly happy," and they called their daughter a "kind and loving person." They further added that Harry "shares the same qualities," and this brings them "great joy."

Royal commentary on the upcoming union came from the Duke and Duchess of Cambridge, Prince William and Kate Middleton, and they shared their excitement for the newly-engaged couple.

The Duke and Duchess expressed what a joy it's been getting to know Markle.

The Queen and Duke of Edinburgh shared their delight at hearing the good news.

The Prince of Wales, Prince Harry's father, and The Duchess of Cornwall were "thrilled" when they heard the good news.

So, now that the families are all on board with the new royal "it" couple, it's time to turn to Twitter and see how the non-royals are feeling.

The thought of another royal wedding is very exciting.

You'll remember that coverage of Prince Harry's older brother's nuptials was all over the news when William, the Duke of Cambridge, and Kate Middleton wed on April 29, 2011.

Princess Diana, the beloved late mother of Prince Harry and the William, Duke of Cambridge, was mentioned along with wishes of joy and happiness.

An excited Meghan Markle GIF from Suits only seems appropriate.

Of course the news of the engagement is exciting, but people really want to see that ring.

C'mon, it's a royal engagement ring — you know you're dying to see it.

Seeing the royal family look more and more like "modern Britain" is another source of joy resulting from this engagement.

Old traditions relating to the royal family would have made it very difficult for a previously married American actor to marry into the British royal family, but Markle is breaking the mold of ancient royal protocol.

The well-wishes just continue to pour in (accompanied by fitting emojis, of course).

You can cross "royal engagement" off of your wish list now.

Prince Harry and Markle confirmed their relationship in November of 2016, when Prince Harry put out a statement defending Markle from the press. In a statement released by Kensington Palace on Nov. 8, 2016, Prince Harry expressed concern for Markle's treatment by the press and denounced "the racial undertones of comment pieces." He went on to express his disappointment in the "outright sexism and racism of social media trolls." It was a rare move for Prince Harry, but it showed that he deeply cares for Markle and her ability to lead a normal life.

If today's news is any indication, then the pair's love for one another has grown strong in the past year, and hopefully they can look forward to a lifetime of happiness together. From the looks of it, the internet is very much here for their royal love story.