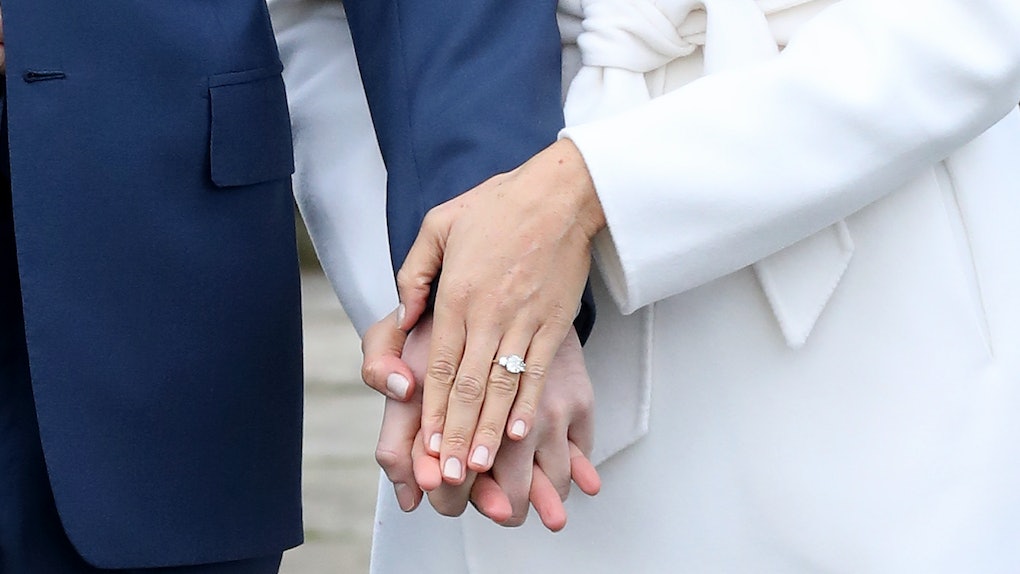 Hear ye, hear ye! Prince Harry has officially popped the question and the world is so, so excited. Apparently, Harry proposed earlier this month, though the public is only just now learning about it. Plus, Meghan Markle's engagement ring may be a tribute to Princess Diana, which is almost too amazing for us to think about.

The American actress and literal prince met through mutual friends in July of 2016, and were an official couple by November. Now, here we are just a year later, and the wedding is on. According to an official statement released by the Clarence House, the couple is set to be wed sometime in 2018.

But can we talk about that ring?!

Here's the need to know detail: Prince Harry reportedly designed the stunner himself, and even implemented diamonds that once belonged to his mother, Princess Diana. According to Us Weekly, Harry used some of the precious stones that came from one of her brooches to create his engagement ring for Markle.

If you guys remember, Princess Diana's famous sapphire ring was given to Kate Middleton by Prince William when he proposed back in 2010. That gorgeous bauble includes an 18-carat blue oval sapphire surrounded by 14 solitaire diamonds, and is only one of the world's most recognized pieces of jewelry in all of history.

Come on. You guys know the one I'm talking about...

TBH, we should have seen this coming. In a recent interview with Vanity Fair, Markle commented on how in love she and Harry are. She said,

Another source told Us Weekly that Markle will move into Harry's (dare we say modest?) two-bedroom home in Nottingham Cottage. The insider put it, "There are no plans for them to live separately. Meghan will move right in."

The Queen and The Duke of Edinburgh are delighted for the couple and wish them every happiness.

The Duke and Duchess of Cambridge said of the engagement: 'We are very excited for Harry and Meghan. It has been wonderful getting to know Meghan and to see how happy she and Harry are together.'

Everybody buckle up, because this year is going to be a big one.

In the mean time, Meghan... keep us posted on, like, your dress, and if you need bridesmaids, and any honeymoon planning, and what you're thinking about doing for a cake... etc. etc.

If you need any help, just call us.