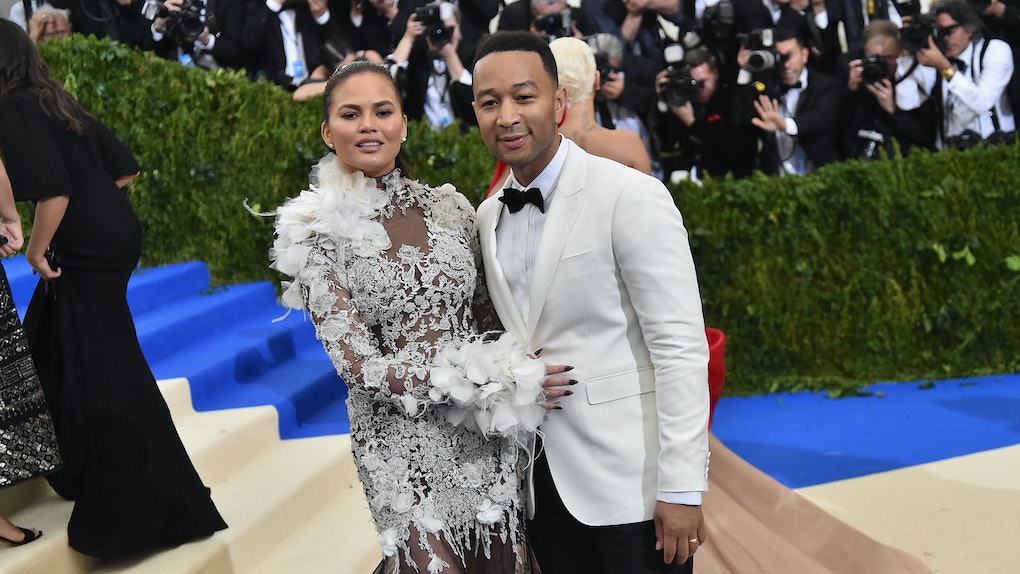 If you live under a rock, you might have missed the news that Chrissy Teigen is pregnant with baby number two. The world will soon be blessed with another hybrid of Teigen and her husband, John Legend. And these tweets about Chrissy Teigen's pregnancy announcement tell you everything you need to know about this happy news.

In typical Teigen fashion, she announced the pregnancy on Instagram today, Nov. 21, and enlisted 19-month-old daughter Luna to help.

She asked Luna, "What's in here?" and pointed the camera at her stomach.

Luna grabbed Teigen's stomach and said, "Baby." And then drooled, as you do. People awwed and laughed in the background, but weirdly, I didn't hear anyone screaming or crying, confronted by overwhelming cuteness, which would have been my reaction.

The reveal was adorable, and the video caption was typical Teigen: "it's john's." (As if we had any doubt about that, given that Luna and Legend are basically twins. I know, I know, #thatsthejoke)

And anyways, this is some of the happiest news to come out of an otherwise depressing news cycle, what with net neutrality being threatened, the president tacitly endorsing a man who has been accused of child molestation, and the fact that people are actually making the Friends trifle-meets-shepherd's-pie for Thanksgiving.

I'm not the only one who feels that way. Twitter is going wild.

I mean, the gifs. Sometimes it's the only reason to make announcements on social media.

Which is kinda weird, but OK.

Yes, we know that we don't know them. It's still so exciting.

2017 has been hard on us all, so when the couple was trending for good news, we all breathed a sigh of relief.

Seriously, this has been a year.

And Teigen and Legend, let's be frank, came to the rescue, selflessly deciding to procreate again.

But some people might be getting a little too invested.

I mean, let's be honest, this child is going to be blessed, and this announcement was the perfect way to balance an otherwise tough day, but, like, come on, guys.

But, at the end of the day, I get the enthusiam, even if you're more excited for Teigen than, say, your own sister.

Because, sure, the overwhelming majority of people who are excited for Teigen and Legend have never and probably will never meet the couple, but oh my god, this news is amazing for several reasons.

The fact that they're cooking up baby number two only a month after they announced that they're trying is huge: Infertility is still a very sensitive subject globally, and Teigen has been instrumental in helping to destigmatize fertility issues. Over the years, Teigen and Legend have been candid about fertility struggles and their use of IVF in the past. So we know that this pregnancy came from a lot of hard work and love.

Perhaps most important, however, is the fact that Teigen and Legend are amazing people who clearly love their daughter, Luna, and make tons of people laugh on the regular. Teigen has become known for her dry humor, her unapologetic clapbacks at trolls, and her expert trolling of husband Legend. (And Legend is not too bad either, I guess.)

And, of course, there are all the IG and Twitter posts about Luna, which let you know that baby number two will be well taken care of.

So, yeah, we may never meet them, but it's a little bit like your best friends announcing a pregnancy.