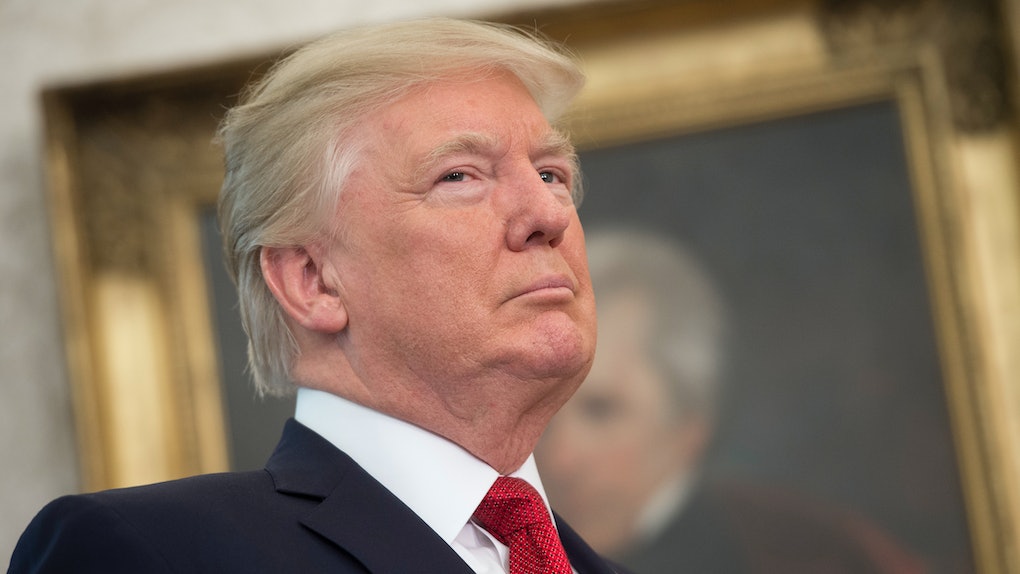 Trump's Reaction To Mueller News Reportedly Filled With Anger: "Everyone Is Freaking Out"

On Monday, Oct. 30, President Donald Trump responded to news regarding Robert Mueller's first indictments — in relation to the FBI's Russia investigation — with "exasperation and disgust," a new report from the Washington Post says. According to the Post, which says it relied on interviews with 20 senior administration to capture the mood of the White House on Monday, the president wore visible anger throughout the day. Meanwhile his staff members exchanged concerns about what Mueller's next moves will be and whether it will affect others in Trump's circle.

"The walls are closing in. Everyone is freaking out," the paper quoted one Republican source close to the White House as saying.

The Post's account of the White House's reaction came on a significant day Mueller, the special counsel who was appointed by the Department of Justice earlier in the year after President Trump fired former FBI Director James Comey. The official task for Mueller? Oversee the criminal investigation into potential ties between Trump's presidential campaign and Russia's efforts to influence the 2016 election.

In my capacity as acting attorney general I determined that it is in the public interest for me to exercise my authority and appoint a special counsel to assume responsibility for this matter. My decision is not a finding that crimes have been committed or that any prosecution is warranted. I have made no such determination. What I have determined is that based upon the unique circumstances the public interest requires me to place this investigation under the authority of a person who exercises a degree of independence from the normal chain of command.

Monday marked the first time that charges related to the investigation were made public. The charges were against Paul Manafort, the former manager of Trump's presidential campaign, and his deputy, Rick Gates. The 31-page indictment against the two men read,

The indictment contains 12 counts: conspiracy against the United States, conspiracy to launder money, unregistered agent of a foreign principal, false and misleading FARA statements, false statements, and seven counts of failure to file reports of foreign bank and financial accounts.

Both Manafort and Gates pleaded not guilty and were released on bail.

Monday also brought the revelation of another person who faced charges, a campaign advisor named George Papadopoulos, who was arrested over the summer and, earlier in October, pleaded guilty to lying to the FBI.

More Reactions From The White House

According to the Washington Post, amidst the concern at the White House on Monday, there was also relief that neither the president nor his campaign was mentioned the indictment against Manafort and Gates.

The following morning, on Tuesday, President Trump commented on the coverage of the news via Twitter. He wrote,

The Fake News is working overtime. As Paul Manaforts lawyer said, there was "no collusion" and events mentioned took place long before he ... came to the campaign. Few people knew the young, low level volunteer named George, who has already proven to be a liar. Check the DEMS!

President Trump had said much of the same on Monday. In response to the indictment, Manafort's lawyer echoed the same sentiment,

President Donald Trump was correct. There is no evidence the Trump Campaign colluded with the Russia government.

Mr. Manafort represented pro-European Union campaigns for the Ukrainians and in the course of that representation he was seeking to further democracy and to help the Ukrainians come closer to the United States and to the EU. Those activities ended in 2014, two years before Mr Manafort served in the Trump Campaign.

Following the charges, Paul Manafort has been ordered on house arrest.