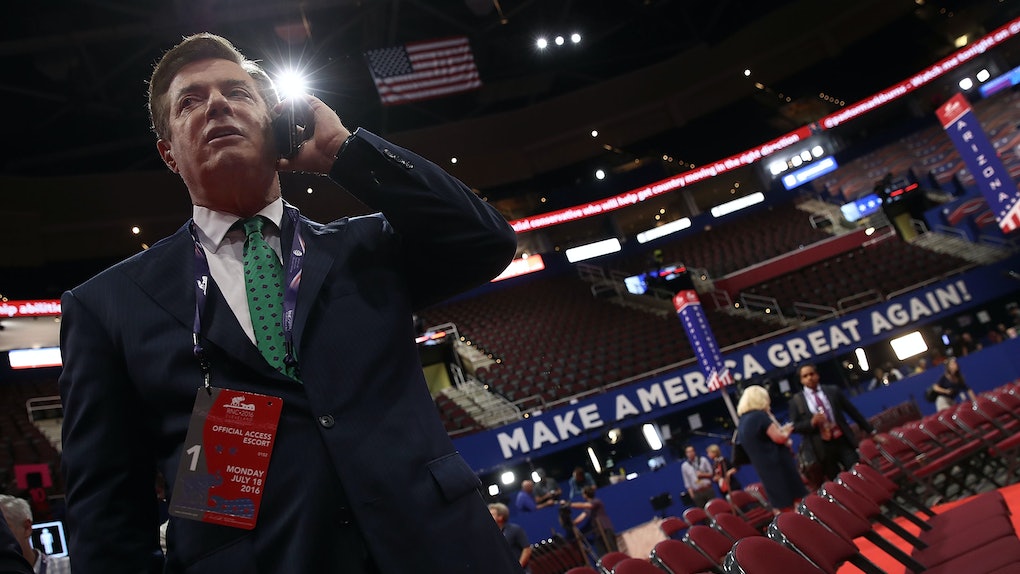 It's been a bombshell news day for the Trump administration. On Monday, Oct. 30, Trump's former campaign manager Paul Manafort and associate Rick Gates pleaded not guilty to charges released earlier in the day by the Justice Department. The report of how Manafort and Gates would plead came after the two were faced with 12 counts against them, including conspiracy against the U.S. and money laundering.

The two men were indicted early Monday and had been scheduled to appear before the court at 1:30 p.m. ET. The New York Times reports that the blue-suited men, whose appearance after the morning's news was highly-anticipated, appeared with their hands behind their backs. According to CNN justice correspondent Evan Pérez, in a Twitter post, Gates' attorney was not present, and he was instead represented by a public defender.

That Manafort and Gates pleaded not guilty breaks trend with a third Trump campaign aide, whose guilty plea came to light on Monday as well. The aide, George Papadopoulos, admitted to lying to the FBI during its investigation into Russia's possible connection to the U.S. election last year. The details of his plea were released by the Justice Department on Monday, after being filed on Oct. 5.

As Politico reports, prosecutors Monday requested a bond of $10 million for Manafort and $5 million for Gates, though the men are allowed to be detained in their homes until they can post bail.

While those may seem unreasonably high figures, in perspective, they're not much compared to the $18 million Manafort is charged with laundering, and the $3 million Gates is charged with transferring via offshore accounts.

The two pleaded not guilty, according to the Times, on all counts. Politico reports that the charges could potentially be used to pressure them, however, into assisting the ongoing FBI investigation, led by Special Counsel Robert S. Mueller III.

Manafort and Gates, on charges of money laundering alone, could possibly face up to 20 years in prison. The document released by the Justice Department state that the two men "knowingly and intentionally conspired to defraud the United States by impeding, impairing, obstructing and defeating the lawful government functions of a government agency."

The White House was on damage control during a Monday afternoon press conference in which Press Secretary Sarah Huckabee Sanders tried to minimize the role Papadopoulos had in the campaign and separate the president from Manafort's and Gates' indictments. Her statements sparked their own subset of questions and controversy.

Papadopoulos pleaded guilty to making false statements regarding his contacts with Russian nationals during the spring of 2016, including with individuals said to be connected to the Kremlin.

Manafort had been involved with the Trump campaign from March through August of 2016, until it was revealed that he had accepted $12.7 million in payments from a pro-Russia Ukranian political party. The former campaign manager had anticipated charges against him after having his Virginia home raided in July of this year.

Trump was notably absent from the charges and documents revealed on Monday, as was the more specific topic of whether he or his staff colluded prior to the election. Even so, the president was quick to downplay — and distance himself — from the indictments. Throughout the weekend and into Monday, Trump was tweeting about the investigation's latest developments and the possibility of collusion.

It's unclear what's next for Mueller's investigation, and what the indictments might mean for other Trump campaign staffers and for the president himself. While those close to Trump have been implicated, there isn't any publicly available information about his role or possible collusion with Russian officials.