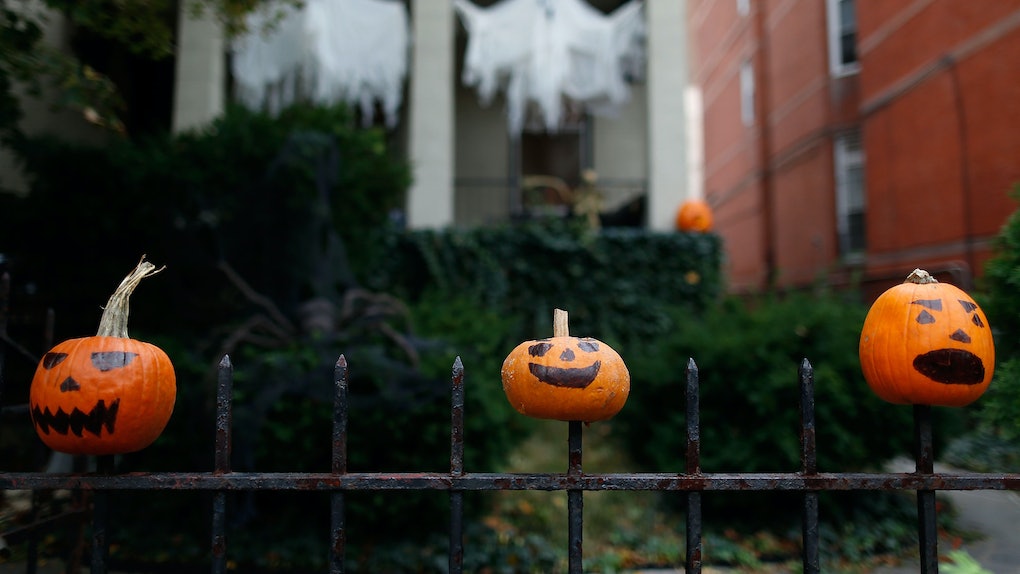 Tensions are flaring in communities nationwide in anticipation of Halloweekend. Halloween decorations about President Donald Trump are causing contoversy, further dividing Trump's supporters from his critics. At least three cases of tombstones referencing the president have popped up in the news.

One instance involved a neighborhood in Cortlandt, New York, where resident Fabian Vergara decorated his yard with a headstone reading "D. Trump, Burn in Hell," accompanied by an oblong shape in a black plastic bag made to look like a dead body and fake crime scene yellow tape. The headstone was one of five in the yard, according to USA Today. Vergara, quoted by USA Today, says he was "doing it for fun" and that "it was a joke."

"I like Halloween, so I don't see anything wrong with that," Vergara told USA Today. "It's a free country."

But his decorations provoked the wrath of at least one neighbor, Theresa Guicciardo-Perry, who reportedly approached Vergara about it and called city officials hoping they would force him to remove it.

"Is this about Halloween or about you making a political statement?" Guicciardo-Perry said, according to USA Today. "You don't like it here? Get the hell out."

Another case coming out of Massachusetts involved an after-school Halloween event at an elementary school. Per the Washington Post, students reportedly brought in handmade fake tombstones with joke names on them as decorations, one of which read, "Don Trump." The display provoked outrage by other parents and school officials.

A third instance, reported by California radio news station KABC, shows a fake tombstone in the yard of a home in the Miracle Mile neighborhood of Los Angeles, reading, "Donald Trump, 1946-2017. I'm taking all of you with me." To be thorough, homeowner Dan Bowman apparently also made tombstones for Ted Cruz and former Florida Rep. Allen West. Some neighbors and passersby had mixed feelings about the decorations, but Bowman stood by them, saying "It’s the perfect metaphor for how some of us feel."

Trump himself is no stranger to making threats as a joke (just ask Hillary Clinton, who was the fictitious recipient of a golf ball hit by Trump in a doctored GIF he shared on Twitter, or North Korea, which took some of Trump's tweets as a declaration of war). It's a bit different when it's the president, though. It is a crime under federal law to threaten the president or his successors to power, but the legal text suggests that this applies for direct threats, such as by mail. Things get a bit trickier for vague references, as in this case, when making a comment about the president being dead (as opposed to threatening him).

Unpopular or not, the First Amendment generally protects most types of political speech (that's kind of the point). Whether a school or neighbors are agree with it, people, in general, have the right to criticize the president, and yes — even wish him dead. Stanford law professor Nathaniel Persily was quoted in a USA Today article about Kathy Griffin's post depicting a fake decapitated Trump. In that instance, he said, unless someone expresses an actual intent to harm them, "people are allowed to wish the president dead." Ultimately, according to Persily, "to threaten someone you need words that encourage some sort of action."

There are plenty of ways to make political statements that spark dialogue and express your views without getting into any legal trouble. For instance, try carving some Donald Trump jack-o-lanterns, or dress up as the Orange One himself. Perhaps even just a mask (there are many to choose from) will do the trick. If you're into broader political commentary, you can dress up as any member of the White House crew who's no longer on the team, or go for big-picture points with these protest costumes.