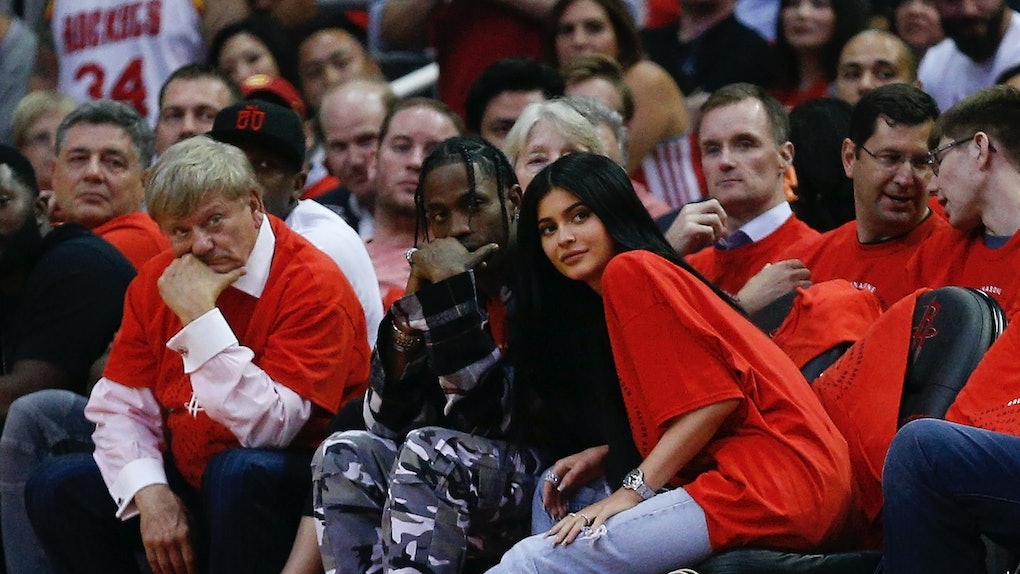 One thing I didn't think any of us would still be pondering as 2017 turned into 2018 is whether or not Kylie Jenner is actually pregnant. But guess what? Here we are, the first week of January come and gone, and we still don't have any answers. Is it just me, or is this whole situation beginning to feel like an episode of Punk'd? Even Kylie's reported baby daddy is remaining tight-lipped. And trust me when I tell you that Travis Scott's response to a question about Kylie Jenner in a new interview will seriously make you cringe.

The rapper addressed both the baby speculation and all the rumors about his relationship with the youngest Kar-Jenner sib in a recent interview with Billboard magazine. But if you're looking for some hard and fast answers here, I'm sorry to say you won't find them.

When the magazine asked Scott if he's spoken to his father about "becoming a father" himself, he replied, "Uh... for what?"

Oooh, burn! I mean really, Trav, that performance is almost Oscar-worthy. I bet he sat in on that major Kardashian media training sesh they aired on KUWTK a few episodes back.

But when he was later asked about his current relationship status with Kylie, and about all the pregnancy rumors, Travis' response was a little less about playing dumb and way more straight-up shady. "I don't want to talk about that," he said. "They're just guesses. Let them keep fishing."

Hmmm. You want us to keep fishing? Well, here ya go:

The 25-year-old did, however, offer up a little scoop about his working relationship with Jenner's brother-in-law, ine Mr. Kanye West. "We’re always talking," he explained. "We’re always working on sh*t. I see him every day."

Sounds like a pretty chill relationship, right? But even so, the "Antidote" rapper said he hasn't managed to pick up any tips from Master Yeezus about dating a major reality star and then seamlessly inserting yourself into and keeping up with her family's weird, televised world.

Hold up, Travis. Do you see Kanye every day, or do you keep to yourself? Which one is it? Because that is, like, a total contradiction and I need answers! In fact, I've needed answers ever since the Kylie and Travis romance rumors first started flying last April, when they turned up at that Houston Rockets game together.

Then all the pregnancy speculation surfaced in September, and I've been looking for some kind of confirmation ever since. And least we got a little photographic proof that the couple was together on Christmas Eve at Kris Jenner's annual Dec. 25 party.

But as far as those pregnancy rumors go, even Ellen DeGeneres hit a wall when big sis Khloé — who is currently expecting her first child with boyfriend Tristan Thompson — stopped by The Ellen DeGeneres Show on Thursday, Jan. 4. Khloe stayed frustratingly vague like everyone else in her fam, not confirming or denying any gossip about her sister.

The star was just trying to innocently discuss her pregnancy cravings, when Ellen attempted to trip her up. "I don't get when people are eating for two full-size people," Kardashian explained. "My mom is one of those people; she bought me eight boxes of Krispy Kreme doughnuts and got mad that I didn't eat them all."

Um, hellooo... if you don't want them can you please send those bad boys my way?

"Is Kylie craving things yet?" Ellen then slyly asked.

But Khloé was onto her. "What do you mean?" she coyly shot back.

"Oh, I don't know what you're taking about," Khloé insisted.

TBH, this clip is super awkward, and I am totally here for Khloé's refusal to spill the beans. But somebody better teach this girl how to successfully dodge a question, STAT, because her smirk kind of gives everything away.

I wonder if Travis Scott is available?