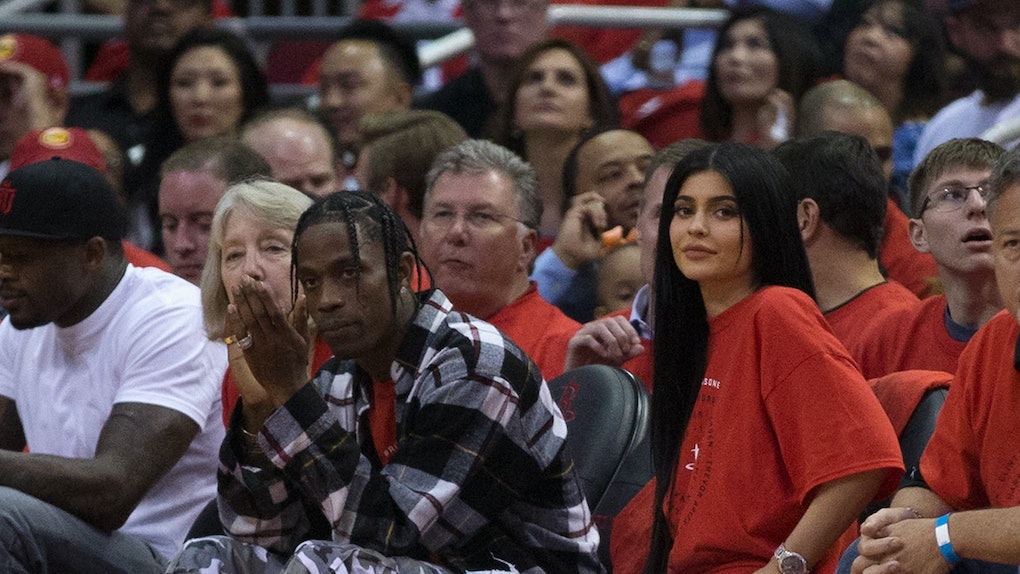 Excuse me, I have an important point to make. I think we've all been so busy waiting for Kylie Jenner to confirm her pregnancy, we haven't even THOUGHT about what's going on with her current boyfriend, Travis Scott. I mean HELLOOO! Travis is reportedly Jenner's baby's daddy, so does he have anything to say? I switched gears from staring at Jenner's feed to peeking at what's up with Travis Scott's Instagram, and I think I found a clue. You guys, Kylie's, like, nowhere to be found.

Let's think about it. There are two ways Kylie could play this. The first way is to pretend everything is normal and continue her life as it was before the pregnancy rumors started. If life was going on as usual, wouldn't it make sense for Jenner to pop up in one or two of her boyfriend's photos? Or, at the very least, comment on or like some of his photos? If you scroll through Scott's Instagram, you can't even tell he knows Kylie Jenner, let alone could co-parent her child in the very near future. Which leads me to Jenner's second option: disappear entirely and only resurface after she's delivered her baby.

This appears to be the route she's taking.

Jenner has practically vanished from the limelight. She's nowhere to be found on Keeping Up With The Kardashians, barely engaging with her best friend, Jordyn Woods, and only posting on her social media accounts here and there for standard, famous person, PR obligations.

Plus, Scott is kind of coming across single AF.

Take Exhibit A. Scott recently shared a photo of himself hanging out at a strip club with the caption, "Hyper."

Sure, it's totally possibly Jenner is an open and accepting partner who doesn't worry about her man hanging out at a strip club, but still. It's a specific decision on Scott's choice to post a picture like this while pregnancy rumors swirl around his girlfriend.

Scott also recently 'grammed a picture of Jenner's friend Bella Hadid on the cover of FN magazine. Again, it's not a big deal if he supports his GF's friends and their careers. It's just weird to share a picture of one woman and never any pictures of your reportedly pregnant girlfriend.

For the most part, Scott sticks to posting pictures of his shows, music studios, moody selfies, or something involving weed and smoking.

Kylie, on the other hand, shared her last photo on Christmas day (over two weeks ago). That's practically decades in Kylie Jenner years.

One source told People magazine we shouldn't expect to see Jenner until after her reported baby arrives. The insider said, "Kylie wants to disappear and be out of the spotlight and focus on her health and happiness."

Another source told Us Weekly,

They added, "She’s worked hard enough to do whatever she wants."

Well, whenever Jenner and Scott are ready to give us the good news, we're more than ready and waiting.

Until then... party on, party people, I guess.