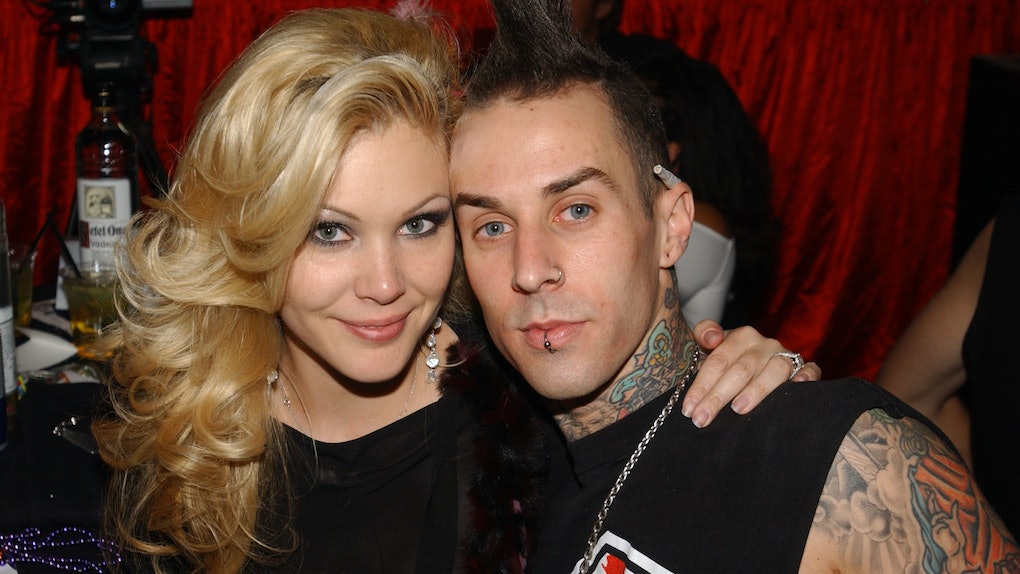 Since going Instagram official with Kourtney Kardashian in February 2021, Travis Barker's love life has made headlines. But this isn't the first time the Blink-182 drummer's romantic entanglements have been in the limelight. Back in 2005, he and then-wife, model, actor, and former Miss USA Shanna Moakler starred on MTV's Meet the Barkers, a reality show about their marriage and family. But if you take a look at Travis Barker and Shanna Moakler's relationship timeline, the reality of their romance was way more dramatic and intense than anything you saw on TV.

From their first meeting to their rocky divorce — and finally finding a way to amicably co-parent — here's how Barker and Moakler’s relationship reportedly went down.

According to Life & Style, Barker and Moakler first met and began dating in the summer of 2002. Barker and his first wife Melissa Kennedy had just split and filed for divorce in August of that year.

After just a year of dating, Barker and Moakler welcomed their son Landon Asher on Oct. 9, 2003.

On Oct. 30, 2004, after two years of dating, Barker and Moakler tied the knot in a very fitting Nightmare Before Christmas-themed wedding in Santa Barbara, California. The theme was inspired by the site of their engagement, Disneyland's Haunted Mansion ride, where according to TMZ, Barker reportedly paid off a cast member so they had the ride all to themselves.

Barker and Moakler decided to share their lives with the world on the MTV reality series, Meet the Barkers. The idea was that the show would depict their unconventional love story and family life. It ran for two seasons until Barker reportedly pulled the plug due to “toxic” energy, as he wrote in his autobiography, Can I Say.

Both Moakler and Barker blame the demise of their marriage on the show. “I think the show destroyed our relationship,” wrote Moakler (as a guest writer in Barker's book). “I think he (Barker) was afraid he was going to be looked on as a reality star. So when the cameras stopped rolling, he distanced himself from me in every way that he possibly could.”

Barker, however, had a different take on why the show soured their marriage. “I felt like having the reality show changed Shanna‘s character. Shanna wanted to be an actress, and I felt she started doing things just for the cameras — for attention, or maybe it was just her dramatic personality,” he wrote. “It was turning into a variety show instead of a reality show — and in my mind, she was behaving out of character on camera, which was carrying over to her not being genuine with me.”

It wasn't all bad. In December 2005, the couple welcomed their daughter, Alabama Luella. Her birth was shown on the last episode of the series.

In the years that followed, Barker and Moakler broke up and made up multiple times in a tumultuous cycle that was heavily covered by the press. It all started when Barker filed for divorce from Moakler in August 2006. Shortly after, he reportedly started dating Paris Hilton (her publicist at the time, Elliot Mintz, reportedly told The Hollywood Reporter that Hilton and Barker were "just friends"), which led to a heated confrontation between Hilton and Moakler when the two ran into each other at a club in Hollywood.

According to police reports, Hilton said Moakler reportedly approached her, “used the most vile of language,” then allegedly punched her in her jaw. Moakler denied the claims and said that although they did argue, it was Hilton's ex Stavros Niarchos who allegedly assaulted her. According to The Hollywood Reporter, Moakler's publicist Susan Madore said Niarchos allegedly "bent her wrists, poured a drink on her and shoved her down some stairs." Multiple outlets reported that both Moakler and Hilton filed police reports alleging battery.

In Can I Say, Barker wrote Moakler also reportedly confronted Lindsay Lohan at a New Year’s Eve party in 2007, after Moakler had reportedly seen Barker and Lohan making out. “I never pursued Lindsay again; I was too embarrassed,” he wrote in his book. “But we stayed friendly.” Moakler also reportedly poured a drink on Kim Kardashian at a 2008 party, after rumors the two were seeing each other started to circulate. Kardashian confirmed the altercation on Ryan Seacrest's KIIS-FM radio show, saying, "Shanna came over and kind of just said a few things and threw a drink. I was just a little bit caught off guard." In his book, Barker wrote he "felt terrible" about the encounter between Moakler and Kardashian.

While this dynamic was far from ideal, it was reportedly the norm for the couple. “This was very normal for them,” a friend reportedly told People. “The relationship was always dysfunctional, they were always love and hate. It was volatile. He’s a rock star, and she likes to go out. They both love and fight hard.”

In September 2008, Barker was in a near-fatal plane crash that left him with several burns on his body. While Barker and friend DJ AM — who was on the flight with him — both survived the accident, their four fellow passengers (including both pilots) did not. Following the crash, Barker said he vowed to change his life and went vegan, started working out, and reconciled with Moakler. However, the couple’s reunion didn't last long. Barker reportedly accused Moakler of cheating on him while he was in the hospital recovering from injuries sustained in the crash, leading them to split yet again.

The two finalized their divorce by the end of 2008, but according to People, despite their tumultuous back-and-forth dynamic, the exes continued to live together to "make things easier" on their kids. A source reportedly told the publication the exes were "constantly arguing about going back and forth to court" so living together was "a happy solution — each one had a bedroom and the kids were together and they have their own lives but it was never going to work. No two divorced people should be living together."

According to court papers obtained by People, Moakler claimed that on multiple occasions, she expressed a desire to move back to her home in Calabasas, but Barker would become “enraged and threatening legal action to take our children away from me or by crying that he was depressed and needed us to be with him.” Moakler said this created a cycle of her returning to the relationship despite it becoming increasingly unhealthy each time they reunited. Nevertheless, they continued living together until 2014.

Things between Moakler and Barker took another sour turn in December 2014, when Moakler called the LAPD after a heated argument where Barker allegedly threatened to “put a bullet" in her head. Barker, however, told police it was Moakler who “threatened to have her boyfriend come and beat him up.” LAPD Lt. Dionne Watts told People there was an investigation, but neither Barker nor Moakler were arrested.

How long the two continued to live together under the same roof following the 2014 altercation is unclear, but in 2016, Barker told People he had purchased a house outside of Los Angeles where, seemingly, he and Moakler were taking turns spending time with their kids. "I bought a house that's very close to my children's school, so when she's with the kids, she's there; when I'm with the kids, I'm there. There's no making them travel back and forth to different houses." In the same interview, he said he and Moakler were co-parenting as friends. "The kids' best interest is what we all have in mind — there's nothing else," he said. "Our relationship was so long ago. We're just being friends. Doing the best co-parenting is the most important thing."

After all the ups and downs, and 13 years after their divorce, the exes seem to finally be at peace. “Travis and Shanna are in a very good place co-parenting their children,” a source told Us Weekly. “She wishes Travis all the best.” Moakler also reportedly supports Barker moving on with Kardashian. "He's my friend and co-parent, and I want him to be happy, and if being with her makes him happy, and she's happy, I'm happy for both of them, honestly," Moakler told a reporter outside of Los Angeles International Airport on Feb. 19, per Page Six. "He can handle that Kardashian drama."

On Feb. 25, Moakler reiterated her good will toward the couple in an interview with Us Weekly. "As long as she's great to my kids and they're both happy, I'm happy for them," she told the publication. "I absolutely am super happy for them. I have no ill will toward anybody."

There’s no question these two had a very rocky romance, but not all relationships are meant to last forever. At least at the very end, they found healthier paths that freed them both up to move on to new love, with (hopefully) plenty of lessons learned.