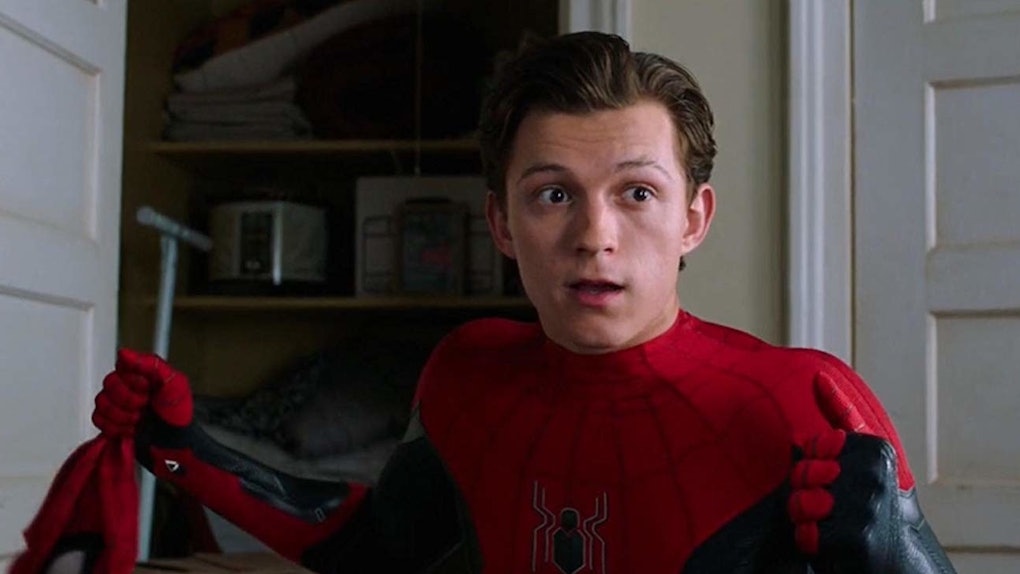 Peter Parker is swinging back into action, and no one is more excited about it than Tom Holland. The actor took to Instagram on Sunday, Oct. 25, to let fans know he had landed in Atlanta, Georgia, and was on his way to begin work on his third Spider-Man film. For all Marvel fans, this video of Tom Holland confirming Spider-Man 3 is filming is such an exciting update.

The year 2020 has been pretty terrible for everyone, and that includes Marvel superfans. For the past decade, each year has included an ever-increasing number of movies set within the expansive Marvel Cinematic Universe, but 2020 marked the first year since 2010 without a new MCU film. Marvel originally had three movies scheduled to premiere in 2020 — Black Widow, Shang-Chi and the Legend of the Ten Rings, and Eternals — but they were all pushed to 2021 due to the coronavirus pandemic. Now, everyone's favorite web-slinger is returning to save the day with a new Spider-Man flick.

After wrapping filming on the upcoming video game adaptation Uncharted, Holland shared an excited video on his Instagram story confirming he had just returned to the U.S. to begin filming Spider-Man 3, saying: "OK, so, we just landed in Atlanta and uh... it's time for Spider-Man 3. Let's go!"

The plot for this third movie is still under wraps, but the ending of 2019's Spider-Man: Far From Home and some of the casting announcements already have people theorizing. The second Spider-Man flick was actually the last Marvel movie to hit theaters before the coronavirus pandemic put the MCU on hiatus, so it's still fresh in fans' minds. That sequel ended with J. Jonah Jameson revealing Spider-Man's identity to the world. Obviously, the new film will focus on Peter Parker no longer being able to hide behind a mask.

That J. Jonah Jameson scene also sparked a lot of chatter about the new movie potentially following a similar route to the 2018 animated hit Spider-Man: Into the Spider-Verse and bringing back Tobey Maguire and Andrew Garfield's versions of the web-slinger to meet up with Holland's version. The bit with Jameson was a surprise cameo from J.K. Simmons, who played the reporter in the Maguire-led Spidey trilogy from the mid-2000s. In recent weeks, reports have ramped up that Maguire and Garfield will return in Spider-Man 3.

Adding some fuel to these rumors is the movie's confirmed cast, which includes Benedict Cumberbatch reprising his MCU role of Doctor Strange and Jamie Foxx making a surprise return as the supervillain role of Electro. Foxx first played Electro in 2014's The Amazing Spider-Man 2, which starred Garfield as Spider-Man. Given that two characters are returning from past, non-MCU Spidey flicks, fans are anticipating a huge return from Maguire and Garfield as well. The Doctor Strange casting also helps out this theory, considering he can create portals through space and time.

Unfortunately, Maguire and Garfield's involvement is still just a rumor, so fans will have to keep waiting to see if Marvel explicitly confirms or denies the gossip over the coming months. Either way, Spidey's return is great news for Marvel fans, who can expect to see him back on the big screen when Spider-Man 3 premieres on Dec. 17, 2021.

This article was originally published on Oct. 26, 2020

More like this
Zendaya's Instagram About Voicing 'Space Jam: A New Legacy's Lola Bunny Is A Throwback
By Abby Monteil
'Thor: Love & Thunder' Cast, Plot Details, Premiere Date, & More
By Ani Bundel
Here's How To Stream 'Nomadland' So You Can Finally Get The Hype
By Rachel Varina
Stay up to date