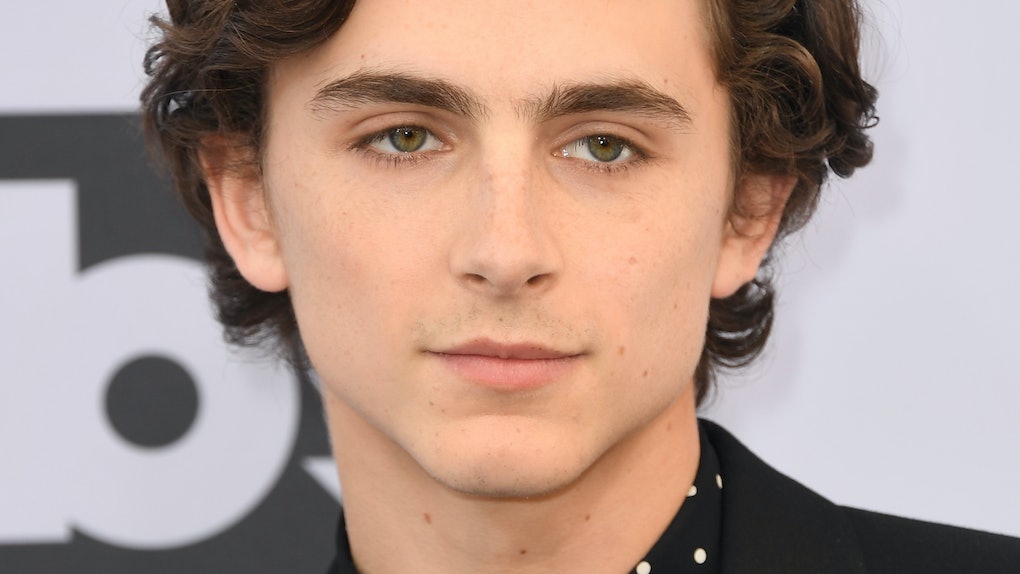 In years past, male actors at award shows more or less always walked the red carpet in simple, understated suits or basic black tuxedos. There was never as much hype around these looks as there were for the actresses and their gowns, jumpsuits, and naked dresses. However, the rise of stylish actors has certainly given us all a whole new group of fits to look forward to. In fact, Timothée Chalamet's outfit at the 2019 SAG Awards basically solidifies him as one of the top men serving consistently strong looks on the various red carpets, and TBH, tonight's outfit is def one of my faves from him. Period.

Chalamet is up for just one award tonight — Male Actor in a Supporting Role — for the film Beautiful Boy, after receiving two nominations last year, for Lady Bird and Call Me By Your Name. He was nominated once before back in 2013 for Homeland, but he's actually never won a SAG Award, so I've got my fingers crossed that tonight's the night for his big win. If not, he'll still be a winner in my heart, as well as a possible winner on the night's best dressed list.

Chalamet might look pretty young, but we're actually the same age, so it's totally fine for me to admit my major crush on him after seeing him wear this look. I mean, can you believe?

Chalamet hit the carpet sporting an all-black ensemble that totally fits with his "uber cool, yet mysterious" persona. On the silver carpet, he rocked skinny leather trousers along with a black and white polka dotted shirt, buttoned up to the very top. He tied it all together with an easy black suit jacket and pointed-toe black boots.

Come on. It's sleek. It's sultry. It's everything everyone expects from cool-guy Chalamet. His hair, as per usual, was worn in his signature tousled waves that match the color of his eyes. Swoon. To think we all used to stan the Justin Bieber helmet hair swoop. What did we do to deserve these chocolate brown curls as an upgrade?

Literally, can someone tell me who gave Chalamet the right to look this damn cute? It's not fair, yet it's incredibly fair all at the same time:

He might be young, but Chalamet is certainly wise beyond his years when it comes to fashion. In fact, W Magazine recently hailed him as "Hollywood's Best Dressed Man On The Red Carpet." He's not afraid to push the boundaries and be bold with his style — I mean, did you see the glittery Louis Vuitton harness he wore over an all-back outfit at the 2019 Golden Globes?

This was everything, TBH:

And let's not forget the Alexander McQueen suit he donned at the 2019 Critics' Choice Awards. Iconic:

It's no secret that our boy Chalamet's got style, and tonight, he'll hopefully score a win as well. But if not, I still love you, Timothée! And so does literally everyone else. If nothing else, you win for best dressed in my eyes.