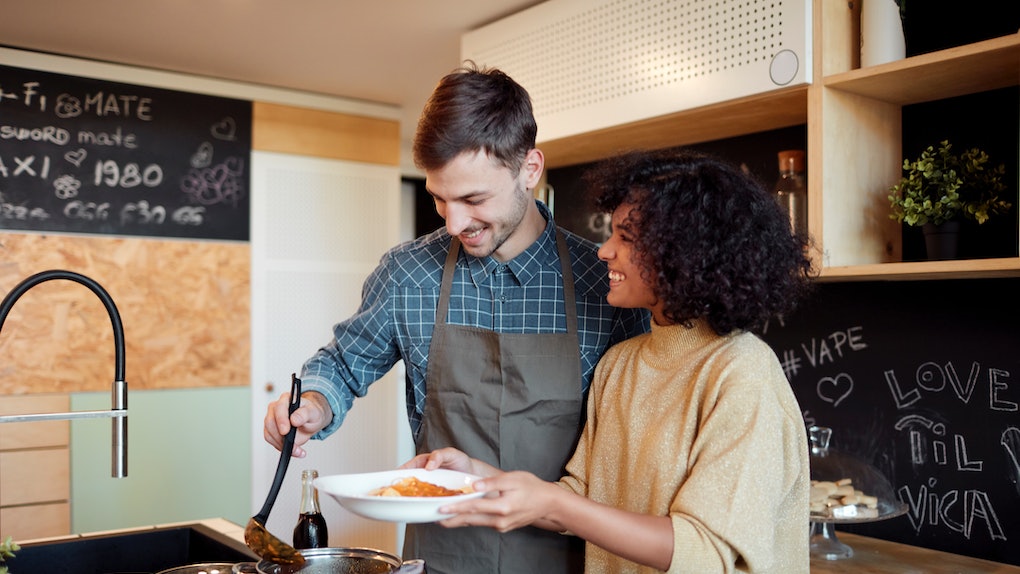 TikTok's "Honeycomb" Pasta Recipe Is Bussin' Or Busted, Depending On Who You Ask

Fresh off of the baked feta pasta and spaghetti cupcake trends, there's a new viral pasta dish that's making waves: TikTok's "honeycomb" pasta. By placing your rigatoni noodles upwards in a pot, you get this visually stimulating honeycomb-shaped dish. While some TikTokers believe it's a delicious and bussin' way to serve one of your go-to food groups, others wholeheartedly disagree with the recipe.

According to the original "honeycomb" pasta recipe posted by TikToker Anna Rothfuss (@bananalovesyoutoo), you'll want to start out by placing your cooked rigatoni noodles upwards in a cake pan with pasta sauce on the bottom. Once you have your noodle honeycomb formed, place some string mozzarella cheese into each of your noodles. Top with some pasta sauce, meat, and shredded cheese before baking in the oven. When you take it out, you'll have a ready-to-serve "honeycomb" pasta that can be sliced like a cake.

You can customize your "honeycomb" pasta with whatever cheeses, seasonings, and sauces you like. When you want to keep it simple, stick with Rothfuss' recipe. If you don't have string cheese, no problem. TikToker Melissa Nielsen (@fitfoodiemelissa) placed a layer of cottage cheese on top of the rigatoni for a lasagna version of "honeycomb" pasta. TikToker @thehungerdiaries has a more upgraded version for pro-home chefs. In their version, they made some homemade Bolognese and béchamel cream sauces to make a pasticcio "honeycomb" pasta (aka Greek lasagna).

Whatever direction you end up going, be sure to let your pasta cool off a bit after taking it out of the oven. That way you can get the perfect slice without everything falling apart.

You may think this recipe sounds delish, but some people are actually upset thinking about what their Italian grandmas would think of such a dish. New York Times reporter Taylor Lorenz even believes it's time for TikTok to revoke certain users' "pasta making privileges."

Lorenz's tweet even sparked an online debate. Some people were all for the "honeycomb" pasta, and couldn't wait to share their foodie pics.

While others were confused why it was being called "honeycomb" pasta and not baked ziti or lasagna.

Then, there were some middle ground people who were interested in the "honeycomb" pasta, but thought it needed a few extra ingredients to really make it special.

Of course, there were also some people who could not get over the cheese stick part of the recipe.

But then, there were the people who just didn't see why there was a debate at all.

At the end of the day, if you're excited to try the "honeycomb" pasta, go for it. Have fun with your recipe, making it just the way you like it. If you do decide to share your foodie feast on TikTok, just be aware that some people may not be as pasta-tive as you.

More like this
The Baked Feta Pasta Dessert Recipe On TikTok Is A Sweet Upgrade To The OG
By Rachel Chapman
TikTok’s Bell Pepper Sandwich Recipes Pack An ASMR-Worthy Crunch
By Kelly Pau
How To Make TikTok's "Secret Rolls" (Hint: The Viral Treat Involves Ice Cream)
By Rachel Chapman
Stay up to date