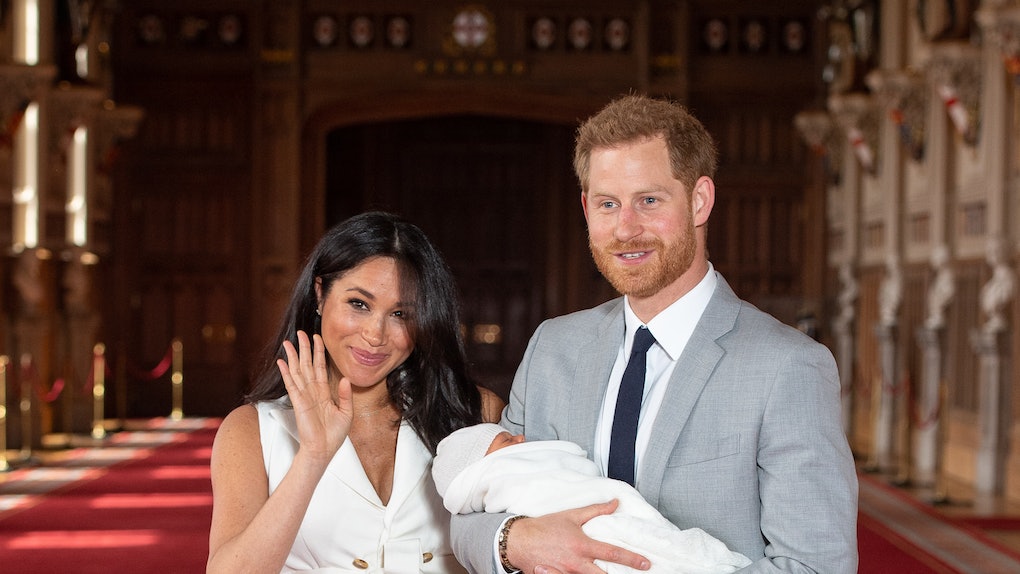 Meghan Markle and Prince Harry just welcomed their newborn baby to the planet, which means it's prime time for Meghan's dad to pop up in the media. Thomas Markle's first comments about Meghan Markle's baby are surprisingly supportive after an intense history of dragging his daughter in the press, but maybe that's the effect babies have on people. While one source reported to US Weekly the new grandfather is "devastated" to be left out, Thomas Markle himself told The Mirror he is "delighted" to hear Meghan and the baby are doing well and he's "proud" his grandson was born into the royal family. Huh. Elite Daily reached out to Buckingham Palace for comments on the report but have not heard back at this time.

Baby Sussex made his debut in the early morning hours of Monday, May 6, 2019. 48 hours later, Meghan and Harry made their first appearance with the newborn and spoke to reporters about how wonderful parenting has been so far. Meanwhile, somewhere, Thomas Markle must have been watching all of this from afar. He has an extensive history of speaking poorly about Meghan to the press, and routinely categorized her as neglectful and opportunistic. In one passionate statement, he said she was "ghosting" him.

In another particularly hurtful move, Thomas reportedly leaked a private handwritten letter Meghan reportedly sent him asking him to stop speaking to the press and stating his actions were breaking her heart. It has all been very messy, very sad, and very stressful.

Clearly, now that Baby Sussex is here, Meghan's attention is elsewhere. Still, Thomas made his way to the press to make the following statement:

I’m delighted to hear that mother and child are doing well... I am proud that my new grandson is born into the British royal family and I am sure that he will grow up to serve the crown and the people of Britain with grace, dignity and honor. God bless the child, and I wish him health and happiness, and my congratulations to my lovely daughter Duchess Meghan and Prince Harry, and God save the Queen.

In contrast to Thomas' supportive comments, a friend of his reportedly told US Weekly he is really hurt to have not been included in his grandson's birth. "He’s as devastated as any grandfather would be who isn’t being given the chance to see his grandchild," the source said.

When it comes to royal followers, Thomas isn't the only one who feels a little left in the dark. Sure, sure, he's blood and everything, but people are desperate to know all the ins and outs of this beloved growing family. Meghan and Harry have gone out of their way to keep a lot of their baby specifics private, which includes Baby Sussex's name at the time of publication. Everyone is speculating on what the royal name of the seventh heir in line to the throne will be.

Regardless of anyone else's feelings or opinions (*cough* Thomas *cough*), congratulations, Meghan and Harry! Your little one is so loved.

More like this
Meghan & Harry's Statement About Prince Philip's Death Is Simple, But Moving
By Sydney N. Sweeney
Princess Eugenie's Instagram Tribute To Prince Philip Recounts Their Sweet Bond
By Brandy Robidoux
Prince Philip, The Duke of Edinburgh, Has Died At The Age Of 99
By Noelle Devoe
Stay up to date