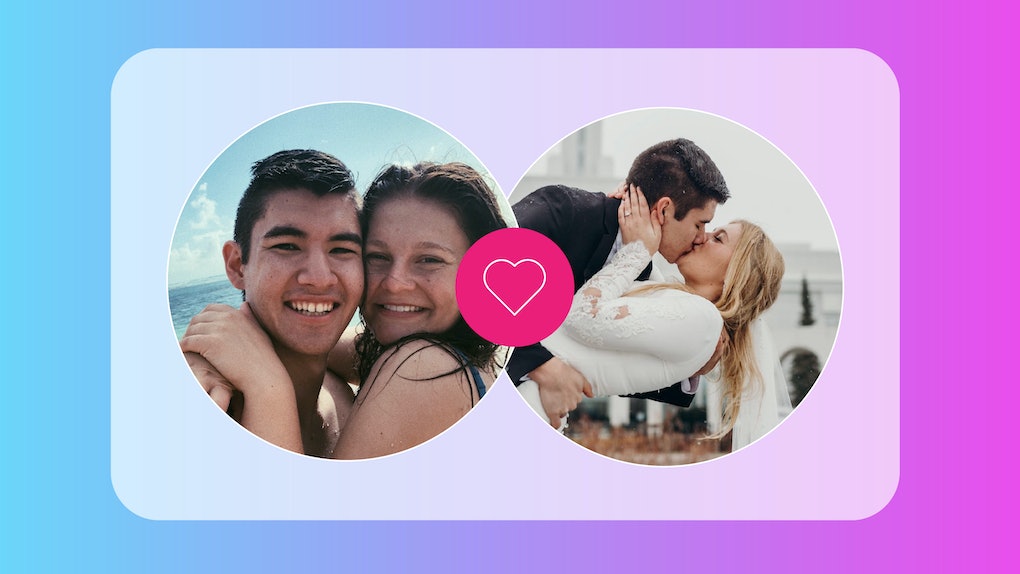 Are you dying to know what a couple's relationship is really like? Elite Daily's new series, ILYSM, celebrates couples who met on dating apps and dives into the inner workings of their relationships. How did they know they were falling for each other? Who sent the first awkward message? What's the one thing they fight about? Are they astrologically compatible, and do they care? By the end of each story, you'll love them both so much.

Aliza Eaton, 21, and Austin Henline, 22, met on Mutual ⁠— a dating app designed for single members of the Church of Latter-Day Saints (LDS). Austin used Mutual for a year and went on almost 100 dates before meeting Aliza, while Aliza only had the app for one night before she matched with Austin. Their first date was so good, she deleted Mutual immediately afterward. After feeling an instant connection over sushi and a dance-off in a park (so cute), the two dated for two months before getting engaged.

They matched in September 2018, got engaged that November, and said “I do” in January 2019, in a traditional LDS temple wedding. Despite their quick courtship, Austin and Aliza are clear on one very important thing: They’re perfect for each other. They’re currently finishing up college at Brigham Young University in Provo, Utah, where Aliza studies communication disorders and Austin studies strategic management. When they’re not in school, Aliza works at a soda shop and as a social media coordinator for a recycling business. Austin works as a program coordinator for Especially For Youth, an education program for church youth.

Aliza Eaton: We met on an app called Mutual.

AE: We dated for 4 months, have been married for 6! I know Married Austin better than Dating Austin.

AH: We’re married and have a pet stuffed dog from IKEA named Possum.

AE: I thought that he looked kinda dorky and kind, but also put together.

AH: I thought she was a cute girl with a funny caption who went backpacking at Havasupai. It turns out, she hates backpacking.

AE: Austin sent it. He saw that I had lived in Japan for a few years and Googled a random city in Japan and asked if I had ever lived there just to get convo going.

AH: It was a message making it seem like I knew more about Japan than I actually did. (That’s where she served a Latter-Day Saints mission.)

AE: We talked for about three days before our first date.

AE: We talk about our first date like a dream, honestly. We got sushi and rode around on his moped before dancing around at a nearby park in the dark. He made me feel so safe and comfortable. I was telling old stories with gusto, laughing my butt off, and flirting shamelessly. I felt confident in being my real, exact self for the first time ever on a first date.

AE: We were making out in a car when I decided to tell him that I had been asked out by someone else but I said no because I liked him so much (hoping he would catch my drift), and he did.

AH: I can’t even remember it, TBH. I kind of avoided it until it was undeniable that we were dating.

If you’re Instagram official, what was your first photo together?

AE: Our dating happened so fast that we didn’t become Instagram official until a few days before we got engaged because I didn’t want to absolutely shock people… just barely shock.

AE: I loved going on little road trips with him but I honestly fell hard when he met my (very picky) roommates and some of my family friends and I realized that he fit right perfectly into my life with the people I cared about most.

AH: I taught her how to drive my moped and she was an expert within minutes. Then we walked around a lake and had such a fun time. She’s a beautiful, perfect girl.

AE: I think our first fight was about me wanting him to pay more attention to me than to the Jazz (basketball) score.

AH: I spend too much time watching the Utah Jazz and Donovan Mitchell and we fought about it a little.

What’s your favorite underrated thing about each other?

AE: The way that Austin’s hands are always cold and the way that he can mirror people’s personalities.

AH: She is so nice to cashiers, waiters, and people in other public settings.

AE: Me not being able to wait for him to come home to watch The Bachelorette!

AH: The app that makes you look like a grandparent.

AE: Maybe once or twice. We don’t text a lot, but we do call to check in!

AH: One or two times throughout the day

Aliza, you’re a Virgo; Austin, you’re a Scorpio. Do you know if you’re astrologically compatible? Do you care?

AE: Websites say that we are sexually compatible. I don’t care really.

AE: We have done The Office, Gossip Girl, and Arrested Development!

What has been your favorite date together?

AE: All of my favorite dates that have morphed into one are the ones where we meet up on campus after school and drive to get dinner somewhere. School is rough for me so I feel like literally crying when I finally get to be with him again after a long day.

AH: We dropped glow sticks down a 1,000-foot mine shaft and watched them disappear.

What’s one word to describe your sex life?

AE: We’re both pretty good at shutting up and listening and changing when we notice conflict. I also think it has a lot to do with the fact that we express our love and support constantly. He feels like home to me.

AH: We’re both easygoing, are good at communicating our feelings, and gauging how the other person is feeling and acting accordingly to make them happy. We love each other.

AE: I have learned to reach for big goals and to chill out.

AH: I’ve learned how important it is to be supportive of other people’s lives and goals.

AE: Never act like somebody you’re not. This is a perfect platform to express yourself as exactly yourself. Also, skip the stupid small talk… start a real convo!

AH: Don’t say anything to the other person over a screen that you wouldn’t say to them in real life. Keep it real and be yourself.