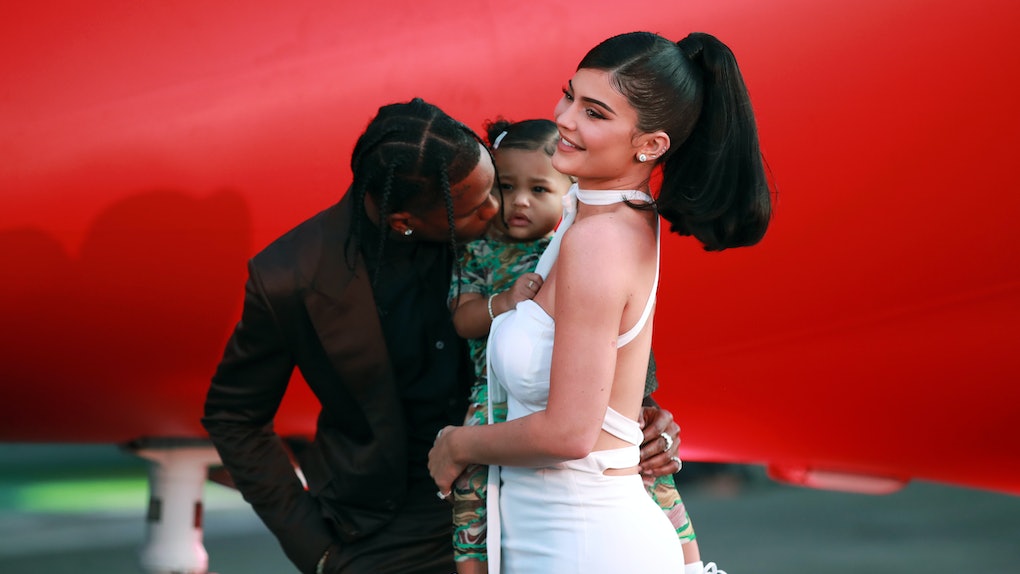 There are literally no words to describe how cute Kylie Jenner and Travis Scott's daughter, Stormi, is, and thanks to social media, fans can follow along as the toddler grows up. The most recent video of Stormi saying "I love you" to Kylie Jenner will completely melt your heart, just trust me!

The Instagram Story came on Oct. 3 while Stormi sat on Jenner's lap and they sweetly declared their love for each other. "I love you, do you love me?" the proud mom asks the 20-month-old, who squealed "Yes!" in response.

Jenner then prompted Stormi to say the phrase herself — and she delivered the line in perfect baby talk. "I love you," Stormi said, as Jenner bathed her in kisses.

Not to mention, Stormi looked as adorable as could be in a floral shirt with her curly hair sticking straight up, seemingly because she had just woken up. (The snap was taken quite early in the morning!)

I don't ask for much, but I will take this opportunity to publicly beg Jenner to continue to bless us with more Stormi content. It's exactly what fans need to keep a smile on their faces!

Thankfully, I feel like the older Stormi gets, the more we'll be seeing her. The tot made her red carpet debut in August at the premiere of Scott's Netflix documentary, Look Mom I Can Fly.

Stormi stole the show as the former couple posed for photos with their daughter, who rested on Jenner's hip. Ugh, swoon!

OK, something a tad more serious for a minute: On Oct. 1, TMZ reported that Scott and Jenner had decided to take a break. However, Jenner reassured fans on Oct. 3 that whether or not she and Scott get back together romantically, they'll remain friends and Stormi won't be affected. Phew! That's really all that matters.

Jenner tweeted, confirming the split, writing, "Travis and i are on great terms and our main focus right now is Stormi our friendship and our daughter is priority."

The makeup mogul has proven she's a dedicated mother since welcoming Stormi in February 2018. Jenner opened up to Interview Germany in March about how her life has changed since giving birth.

"I always knew I wanted to be a young mother. I remember people used to ask, 'Are you ready for this?' And I always knew I was ready but you don't know what that love and that feeling is like until after you have a child," Jenner explained. "She really comes before me so that is a lot to take in at a young age but I feel like I was definitely made for this and she has changed my life for the better."

Jenner also got real about making sure she sets a good example for Stormi. "I feel like I felt a lot more pressure to become a role model when I had my daughter because I know she’s going to look up to me and I want to be the best example I can be," she said.

All I can say is that I'm looking forward to seeing more tender moments between Jenner and Stormi.