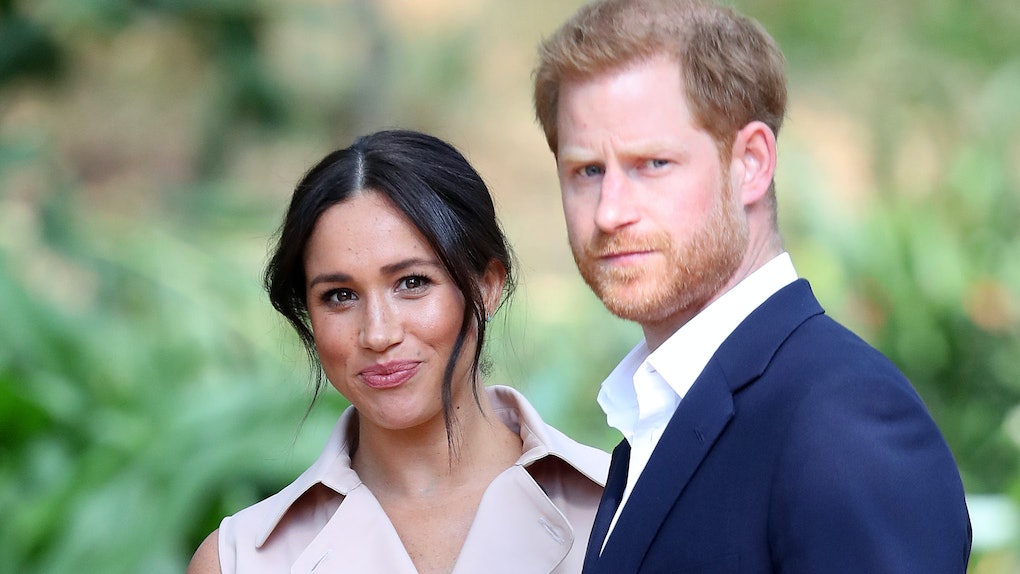 Meghan Markle and Prince Harry's tell-all interview with Oprah Winfrey has yet to air, but it's already a huge deal. The media storm surrounding the Duke and Duchess's tense relationships with the UK royal family and media have certainly only intensified in the days leading up to the special. But it's also becoming clear that when it comes to this controversy, nothing is as it seems. Look no further than this wild video of royal experts lying about Harry and Meghan's Oprah interview.

British YouTubers Josh Pieters and Archie Manners decided to test the validity of royal commentators' statements about the couple by asking them to give their thoughts on the tell-all... on March 5, two days before anyone actually got to see it. Posing as a fake production company, they spoke with four royal experts: the queen's former press secretary Dickie Arbiter, Majesty Magazine editor Ingrid Seward, PR consultant Richard Fitzwilliams, and CNN royal commentator Victoria Arbiter.

While the four interview subjects admitted they hadn't actually seen the new interview (which wouldn't air until Sunday, March 7), they were happy to issue false statements about it as if they already had. Seward claimed that Meghan was simply "giving a performance," while Richard Arbiter insisted it wasn't a balanced interview. The royal experts also offered statements on wilder made-up moments, such as Meghan saying she would refuse a coronavirus vaccine or talking about her love of the "Balham Donkey Sanctuary." But every response painted the couple (especially Meghan) in a negative light, despite the fact nobody had even seen the interview yet.

"Four leading experts willingly commenting on something they know absolutely nothing about. Perhaps when it comes to Harry and Meghan, there's more to the story," the YouTubers concluded.

The royals have always been in the spotlight, but the press circus has increased considerable since Harry and Meghan began dating in 2018. The UK press were hard on the couple from the beginning, and often made derogatory comments about the Duchess based on her race. The couple distanced themselves from the public eye after stepping back from their royal duties and moving stateside in early 2020, but the tell-all interview has reawakened this controversy in full force.

On March 4, a preview clip of Meghan accusing the palace of spreading lies about her and Harry surfaced. That same day, The Times published allegations that Meghan bullied staff members while living in the UK, which her team described as "a calculate smear campaign based on misleading and harmful misinformation." There's no telling how the world will react when Meghan and Harry's Oprah interview premieres, but if Pieters and Manners' video is any indication, there's more to the royal drama than meets the eye, and the haters have already made up their minds no matter what happens.