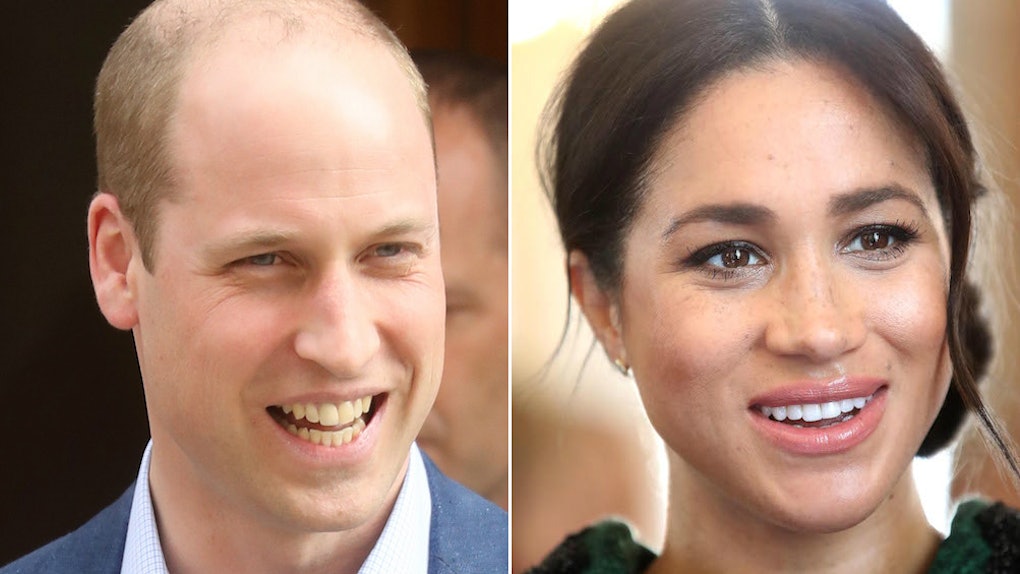 When it comes to Meghan Markle's due date, mum's the word. The Duke of Cambridge is keeping his lips sealed about the impending arrival of Prince Harry and Meghan Markle's first child, which should be happening any day now. In an official royal appearance in New Zealand on April 29, Prince William was greeting supporters when one of them asked if there is any new royal baby news. And the video of Prince William giving a Meghan Markle due date update really doesn't give us any hints about the new royal baby's arrival.

The royal family is famously private, and they've become experts at diverting questions they don't want to answer about their private lives. Some of the biggest secrets they keep are when babies are on the way. Given the intimacy of having a baby on the way, they keep quiet on the exact due date so they can keep a modicum of privacy in an otherwise very public life.

They throw their supporters a couple of bones by announcing the various pregnancies and revealing the general timeframe the baby is expected to arrive. During Kate Middleton's pregnancies, Kensington Palace announced when she went into labor, and it's expected that the Palace will do the same with Meghan Markle. But until then, the royals are remaining tight-lipped.

When speaking with supporters, a bystander asked Prince William if there are "any signs" of the arrival of the Duke and Duchess of Sussex's first child.

William quickly joked back, "I haven’t got my phone on me. I have no idea. You guys will find out before I do at this rate!" A reporter from New Zealand Woman's Weekly caught the moment on video.

Even though William deflected the question about the due date with a bit of a joke, fans of the royal family can be confident that Meghan will be giving birth soon. The Duchess' mother, Doria Ragland, has already arrived in England to be with Meghan and, presumably, help with the baby.

On April 11, Buckingham Palace also released a statement detailing Harry and Meghan's plan for how the birth of their baby will be announced, indicating that the due date was approaching.

The statement said that the couple plans on keeping the arrival of the baby private so they can celebrate without mass attention. It said,

The Duke and Duchess of Sussex are very grateful for the goodwill they have received from people throughout the United Kingdom and around the world as they prepare to welcome their baby. Their Royal Highnesses have taken a personal decision to keep the plans around the arrival of their baby private. The Duke and Duchess look forward to sharing the exciting news with everyone once they have had an opportunity to celebrate privately as a new family.

The only time Meghan talked about her due date was in January 2019, when she was speaking with a supporter at a royal engagement. She reportedly told the supporter that she was six months pregnant and that they had opted not to learn the sex of the baby before it was born. Elite Daily reached out to Kensington Palace for comment on Meghan's remarks at the time, but did not hear back by the time of publication.

Meghan revealing she was six months pregnant in January, however, means that the due date was going to fall around April/May. With only one day left in April and no announcement that the Duchess has gone into labor, it looks like the baby will be making its debut in early May.