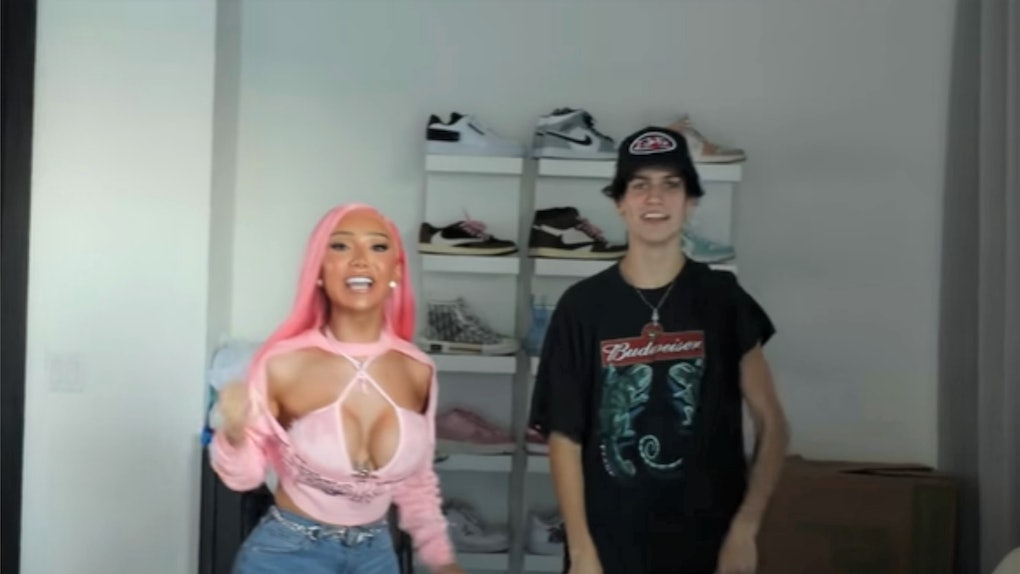 On July 6, drama went down between exes Chase Hudson and Charli D'Amelio when Hudson confirmed he once kissed fellow TikToker Nessa Barrett on Twitter. This didn't sit well with D'Amelio because, while she and Hudson were no longer together when it happened, they were still friends. "You shouldn’t have come to my house after [the kiss] without telling me..." D'Amelio tweeted. So many influencers within their circle weighed in on the drama online, and now beauty guru Nikita Dragun has gotten involved — albeit somewhat playfully. This video of Nikita Dragun confronting Chase Hudson "for Charli" is so intense, leaving their friends totally shocked over what went down.

Dragun is well aware about Hudson's recent tweets, which not only confirmed he and Barrett kissed, but also called out several TikTokers for supposedly cheating on their significant others as well. After those same creators shot back at Hudson for lying, Dragun poked fun at the situation by tweeting, "I would like to personally thank the tik tok community for taking the drama crown away from the beauty community," referencing all the shady back-and-forth exchanges between beauty vloggers on YouTube through the years.

Dragun seemed to take D'Amelio's side in the situation. In response to D'Amelio's tweet calling out Hudson for not being transparent with her and "deflecting" their drama by exposing others' dirty laundry, Dragun tweeted "A clown. That's Clown sh*t" to the 16-year-old TikToker.

Now, Dragun has confronted Hudson in person and Thomas Petrou caught it all on video in a July 9 vlog.

For what it's worth, it seems Dragun and Hudson were actually in the midst of a game of patty cake when this all went down, so they're seemingly on better terms. Petrou filmed the playing, but when Hudson told Dragun she didn't know how to play and called her a "b*tch," Dragun fired back with, "Are you going to call me a b*tch?"

She playfully punched Hudson all the way to the next room, and that's when she said, "And that’s for f*cking Charli, b*tch."

D'Amelio's sister, Dixie, was in the same room, so when she heard what Dragun said, she couldn't help but gasp and then break out into a fit of laughter.

Dragun's confrontation toward Hudson didn't stop there, because when Hudson closed the door on her, Dragun threw the garbage can in his direction, leaving a mess.

"That's what Charli wanted to do," Dixie hilariously quipped.

In the end, Dragun and Hudson made amends. "He said he was sorry," Dragun told Petrou.

Watch their ~confrontation~ beginning at the 2:57 mark in the video below.

Luckily, it seems this little tiff was actually all in good fun, so there were no hard feelings between them. As for Hudson and all the TikTokers he started beef with, that's might be a different story.