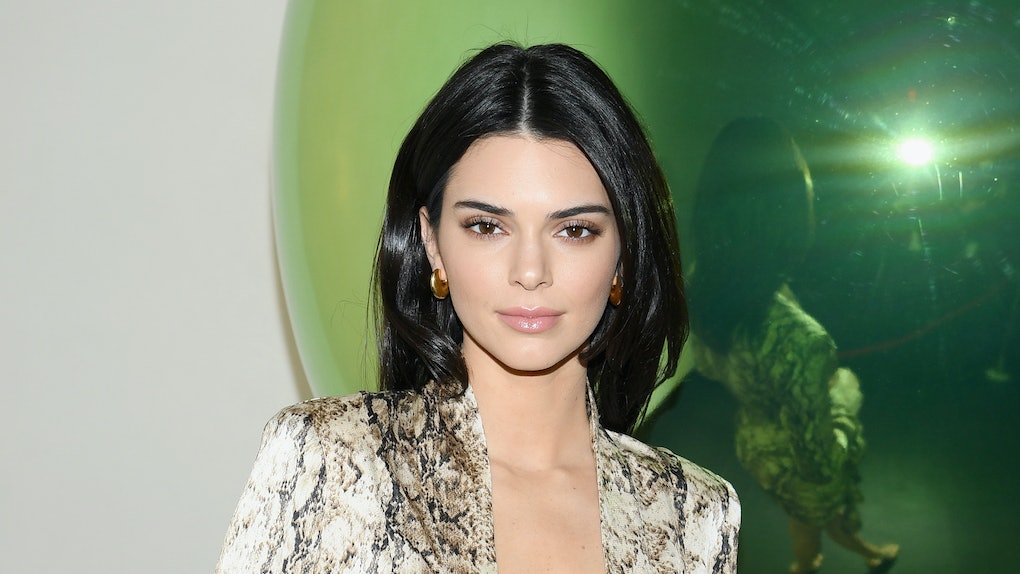 Let's play one of my favorite games called: "Where in the world are the Kardashians vacationing today?" This particular round is inspired by the sweetest video of Kendall Jenner giving Reign Disick eskimo kisses in front of some stunning wilderness background, making me wonder where they are, what they're doing, and how can I get there, too? Kenny is the only Kardashian/Jenner without kids of her own, but between Reign Disick, his two siblings Penelope and Mason, and seven cousins North, Saint, Chicago, Pslam, Stormi, Dream, and True, Kendall has plenty of baby energy in her life.

Jenner posted the cute AF video on Sunday, Aug. 18, along with a series of gorgeous landscape pictures. In the first photo, she is standing with her arms open wide in front of a scene from Planet Earth. In the third picture, a sunset to end all sunsets is descending over a still lake. I'm not, like, a professional geographer or anything, but it looks like they could be somewhere out west. (I'm also using my context clues, considering Kourtney Kardashian posted a series of pictures herself with an American flag in the caption.) However, when it comes to this famous family, they really, truly, could be anywhere in the world.

Fans know that Kourtney and Kendall have a unique bond thanks to the most recent series of Keeping Up With The Kardashians. After the Woolsey fire inundated Kourt's home with smoke, she and her three kids shacked up with Kendall for what appeared to be a really, really long time. In fact, Kendall revealed to cameras that her older sister and her baby squad overstayed their welcome. After just a little bit of sister tension (like, a 3 on a scale from 1 to 10) they worked it out and obviously have maintained their love of travel together.

Lucky them, because it resulted in this gorgeous vacation. Click through for the Eskimo kisses!

All of the Kardashian/Jenners tend to have their favorite travel companions. For example, Kylie likes to travel with her bestie squad, Kim has been known to whisk her husband and children away for luxury family vacations, and Khloé regularly takes her baby True anywhere that there's a beach, sand, or pool. Clearly, Kendall and Kourtney prefer each other as vacay buddies, considering they seem to go away together so frequently.

In December 2018, fans spotted the two sisters on a stellar ski trip (that they would later learn caused a little bit of drama thanks to the show, but again, the two worked it out). During that adventure, both sisters shared smoldering photos of themselves standing outside in the snow in ski boots and bikinis. Kendall captioned her pics, "f*ck it's cold" and Kourtney flat-out admitted, "copied Kendall."

This is peak "do it for the gram" status and I'm jealous. There, I said it.

Hey Kourt, Kenny, and I guess Reign, too — you guys sure know how to give a girl major FOMO. Keep the vacay pics coming. I love to live vicariously through them from my couch.