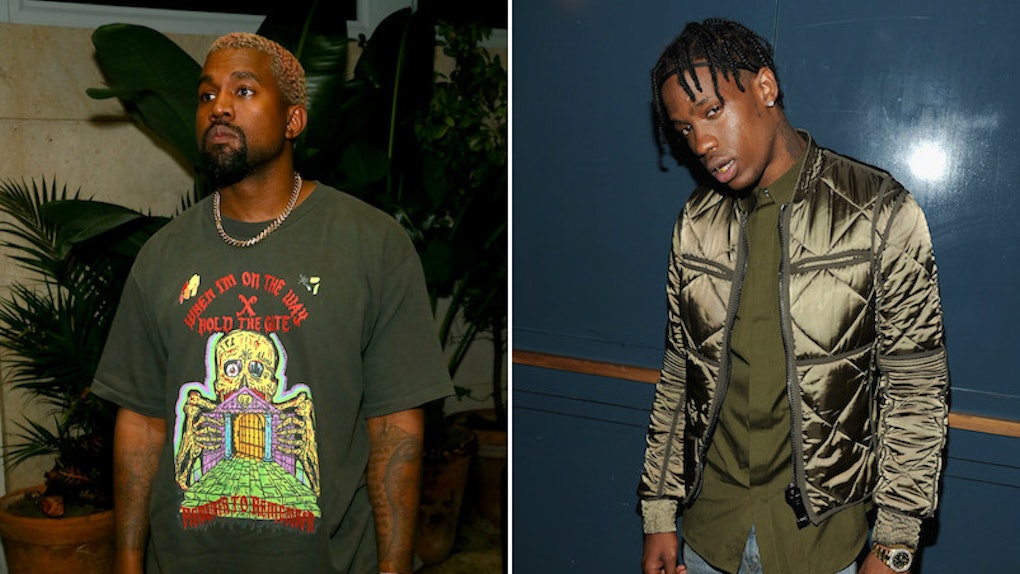 The only thing that seems more complicated than being famous is having famous friends or in-laws. Such is the case with rap heroes Kanye West and Travis Scott. If you follow either musician, you probably know there's been some beef recently between baby Stormi's father and uncle. However, a new video of Kanye West at Travis Scott's concert proves nothing is more important than family, and even the most opinionated celebrities can overcome their differences. The next time I have beef with someone I love, I'll remember that if Kanye West can check his GOAT ego at the door, then so can I.

To bring you up to speed, here's what happened. Ye recently embarked on one of his Twitter rants where he ended up coming for Trav. As you know, Travis Scott and Drake collaborated on Scott's hit single "Sicko Mode," and Drake and West have had outstanding beef for a long time. Drake and West have been going at it on Twitter recently and on Dec. 13 he dragged Scott into it. West slammed Scott for working with Drake in the first place, and took issue with one lyric from "Sicko Mode" in particular that West says Scott should have "never allowed."

In the lyrics, Drake raps the words, "checks over stripes," presumably regarding the Nike and Adidas logos. As you, me, and everyone's mom know, West strictly reps Adidas. For these reasons, it's safe to say this Drake lyric is a sneaky diss to West.

So, in one of his many tweets, West wrote, "F*ck that sickomode song. Family first and always." In a since-deleted tweet, he even posted, "People sold their souls You gotta a number one record but you got it by letting this dude diss your brother in law."

Just when Ye's fans were running to duck and cover, on Dec. 15, the clouds parted.

West announced he and Scott got together, expressed themselves, and now it's "all love."

If you need more proof that everything is groovy, take this video of West and Kim Kardashian rocking out at Scott's concert. Kim was actually the one to post the video of herself and her husband in the stands during Scott's Astroworld show at the Forum in Los Angeles on Wednesday, Dec. 19, but we can give West credit for being there.

In the video, Kim nudges West to look at the camera as he bobs his head to Scott's music.

Well, I don't know if it's "all love" but this certainly doesn't look like "all anger."

Scott has been open in the past about all West has done for him and his career, and recently spoke with Rolling Stone magazine about how he feels about West's controversial decision to publicly support Trump. For Scott, at the end of the day, family is family, too. "Ye deals with different sh*t in his life," Scott said, adding, "That’s family. You don’t wanna desert your bro. Everybody go through sh*t. He still a dope musician."

Based on this video of West at Scott's concert, the feeling is mutual.