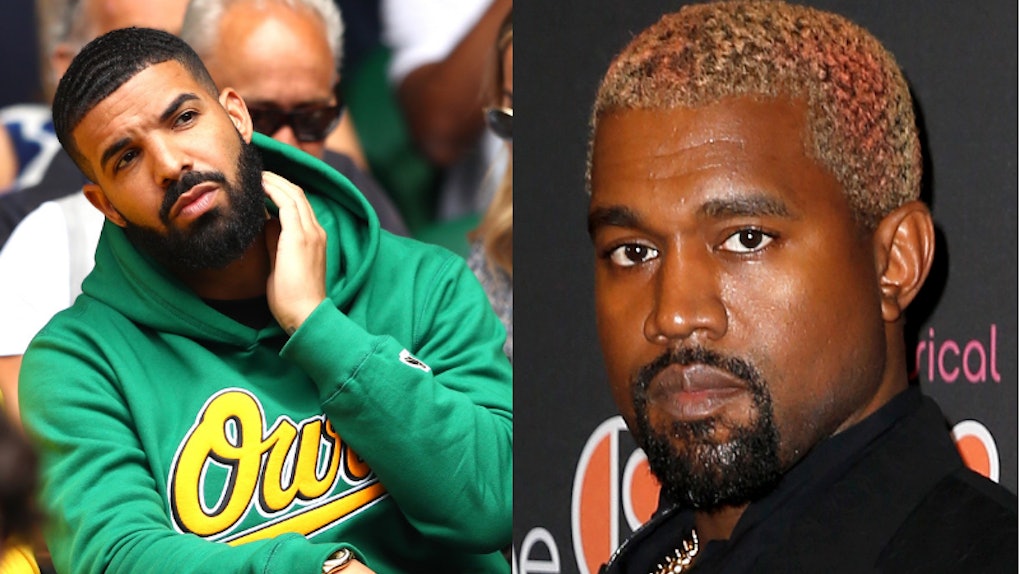 The Drake-Kanye saga is continuing to play out on Twitter, and the latest installment will have you scratching your head. On Saturday, Dec. 15, 'Ye decided that the new day was an opportunity for an all-new string of tweets running the gamut of religion, mental health awareness, Ariana Grande, and yes, his beef with the "Hotline Bling" hitmaker that's been making headlines the last couple days. If you've been following along on the ride, unfortunately, Kanye West’s latest tweets about his Drake feud aren't doing anything to clear up the situation, with new allegations mixed in with a statement that Drake and Travis Scott love him "more than anyone." So, have the rappers put their public feud behind them once and for all? It's up in the air.

On Saturday, Dec. 15, West headed to Twitter for what fans expected to be the latest in his war of words with Drake. However, what we got was something quite different — the "Gold Digger" chart-topper aired his stance on not taking medication for his bipolar disorder, shared a few jabs at Ariana Grande, and posted a string of messages about mental health. In between everything that was going on, eagle-eyed followers did catch a few references to Drake that included more allegations of shady dealings, as well as one message that makes it sound like the two rappers (maybe?) made up. Elite Daily reached out to both West and Drake's camps for comment on the new claims as well as the feud, but did not hear back by the time of publication.

Early that morning, West alleged that the "In My Feelings" star started the drama because of some jealousy and career competition.

"Drake verbally attacked Cudi when he was in the hospital and went at me after TMZ because I decided to release albums in June," he claimed on Twitter. "It [sic] snowballed and he refused to meet with me but texted my mother in law and did sneak disses on peoples records that I consider family." He appears to be referencing the two albums — one with Kid Cudi and the second a seven-track solo release that he previously announced would be dropping in June. He claims that Drake was upset about that and texted Kris Jenner, although the Kardashian matriarch has yet to respond to the claims.

However, just minutes later after airing these claims, West took to Twitter to reveal that he has no hard feelings towards the rapper.

"Drake and Trav both love Ye more than anyone and I love those guys back," he wrote, referencing sister-in-law Kylie Jenner's boyfriend, Travis Scott. "We love everyone."

West's latest message appears to hint that the group's beef is over and done with, and they worked things out behind-the-scenes.

Drake has yet to publicly comment on the saga, apart from sharing multiple laughing emojis to his Instagram Story, which fans assumed were directed at West.

For a moment there, it looked like Ariana Grande could be the latest casualty in the beef. The "Thank U, Next" songstress wasn't feeling all the attention that the two rappers were taking on social media, so she took to Twitter on Thursday with a public plea.

"Guys, i know there are grown men arguing online rn but miley and i dropping our beautiful, new songs tonight," Grande tweeted. "So if y'all could please jus behave for just like a few hours so the girls can shine that'd be so sick thank u."

West quickly made it very clear that he wasn't OK with her call-out, accusing her of using the situation to promote her new music.

"I know Ariana said this to be cool and didn’t mean no harm but I don’t like even slightest level of slight commentary from someone I know loves and respects me," he wrote on Twitter. He continued, "All of this foolishness weighed on my mental health so @ArianaGrande you know I got love for you but until you’re ready to really make sure everyone’s ok don’t use me or this moment to promote a song." Elite Daily reached out to West and Grande's teams for comment but did not hear back by the time of publication.

Before things could get out of hand, however, Grande cleared up the situation with a public apology.

"With all due respect, i don't need to use anyone to promote anything. period," she responded. "I was making a comment ab what men were doing at the time vs. women. it was a joke which i understand now was probably insensitive. i apologize if i was in any way triggering and hope u feel well today."

Needless to say, it's been a whirlwind couple of days of drama on West's 'Gram, so here's hoping he finally puts that all behind him and turns his focus to making more music.