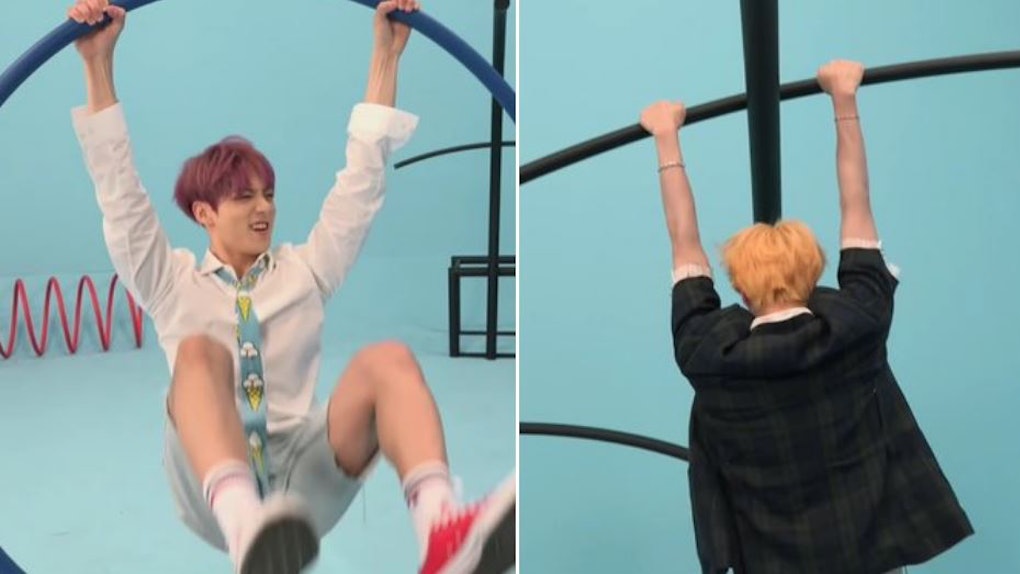 BTS ARMY, prepare for your weekend to start heating up. Just one day after BTS was nominated by the Billboard Music Awards for Top Duo/Group, two of the band's members are hitting the gym and flexing on their pull-ups for a photo-op — and it's just as hot as you'd imagine. You'll definitely want to re-watch this video of BTS' Jungkook and Jin working out from the set of one of their "Idol" era photoshoots, because their pull-up game is on point.

Fresh off of the group's groundbreaking nomination, BTS' official YouTube channel shared a Bangtan Bomb of Jungkook and Jin at a photoshoot with the set styled after a playground. In the two-minute-and-39-second video, which was shared to YouTube on Saturday, April 6, the "Fake Love" hit-makers can be seen clowning around, poking fun at each other, and using a variety of props to show off their pull-up expertise.

According to an English translation in the comments, Jin — who was rocking a bright yellow 'do for his close-up — starts off the video by teasing Jungkook (who's sporting his "Idol" era purple/pink hair) about doing pull-ups. After a little convincing, Jungkook starts doing a set of the arm exercise on the set's pull-up bars and the jungle gym.

While the two are being photographed, Jungkook and Jin pretend to start playfully fighting and even engage in a rock paper scissors battle to determine who'll have to do more exercise. Jungkook loses, prompting him to climb up a green structure and do even more pull-ups. Towards the end of the video, Jin finally also shows off his arm strength by taking a turn on the props, and the clip ends with the pair doing pull-ups together on the monkey bars.

In short, it's just a glorified exhibition of the musicians' pull-up prowess that includes a candid peek at Jin and Jungkook's friendship, and ARMY is so here for it.

It's been a busy past couple of days for BTS. Since the seven-member group from Korea burst onto the American mainstream music scene back in 2017, they've taken it by storm. After snagging Top Social Artist nods two years in a row at the Billboard Music Awards, 2019 appears to be a turning point for the group. With its announcement that BTS was up for the Top Duo/Group category, it seemed like the annual music event was prepared to give more recognition to the band's musical talent, not just its social media prowess (BTS is also up for Top Social Artist again alongside Ariana Grande and Louis Tomlinson, as well as fellow K-pop groups EXO and GOT7).

Maroon 5, Imagine Dragons, Dan + Shay, and Panic! at the Disco are also contenders in the Top Duo/Group category, so the competition will be stiff.

ARMY devotees will have to wait until May 1 at 8:00 p.m. ET to see if BTS snags both awards, which would be monumental for the group and potentially open the door for even more Asian representation in the music industry in the future. In the meantime, you can watch this pull-up video on repeat. You're welcome.

More like this
How To Do Olivia Rodrigo's "Deja Vu" Challenge On TikTok Like Charli & Addison
By Rachel Chapman
Rosé From BLACKPINK's "Gone" Music Video Is The Ultimate Sad-Girl Aesthetic
By Abby Monteil
What Does Taylor Swift's Vault Door Video Mean? Fans Are Decoding It
By Cianna Garrison
Stay up to date