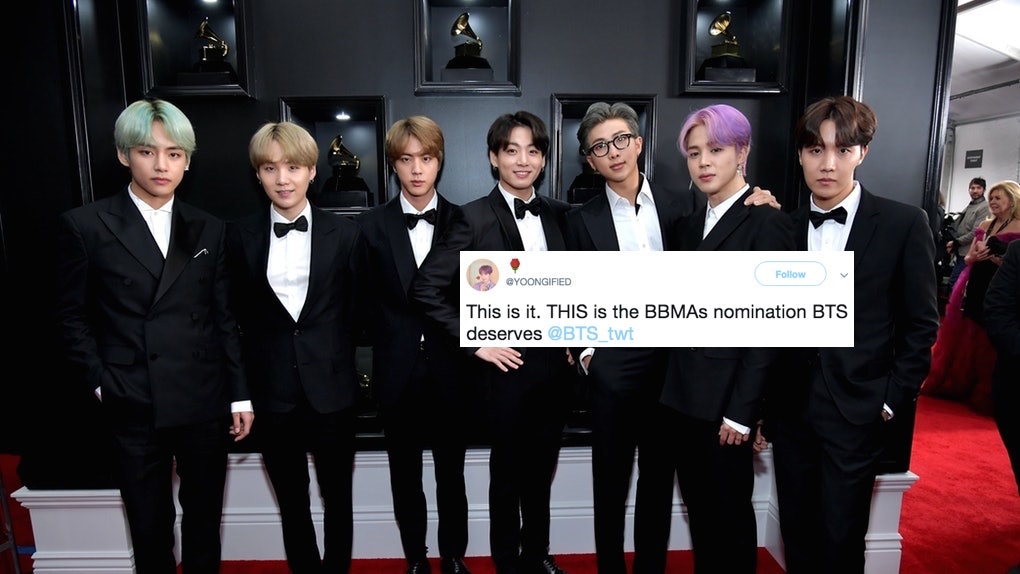 Attention, BTS ARMY! The 2019 Billboard Music Awards nominations are here! And after years of BTS getting passed over for nominations in musical categories, the boys are finally getting the recognition they deserve! BTS snagged a nomination in the Top Duo/Group category. And the tweets about BTS' BBMA nominations show that their fans are hella excited about this awesome milestone.

Altogether, BTS got two nominations: Top Duo/Group and Top Social Artist. They've won Top Social Artist at the BBMAs the last two years in a row, so no one is surprised that they snagged this nom again. But this is their first time being nominated in a category outside of Top Social Artist. In other words, all their BBMA nominations in the past were for their fandom's engagement on social media rather than a nod to their actual musical accomplishments. That just changed. This is another major milestone in that BTS is officially the first Korean group to be nominated in a non-social category! Wooohooo!

And BTS is in good company in the Top Duo/Group category. Other nominees include Imagine Dragons, Maroon 5, Dan + Shay, and Panic! At The Disco.

The other artists nominated in Top Social are fellow K-Pop groups EXO and GOT7, as well as Ariana Grande (my queen), and Louis Tomlinson (the One Direction fandom still works hard).

As for the other categories, Cardi B is the leader of the pack with a nomination in nearly every top category, including Top Artist, Top Female Artist, Top Hot 100 Song, Top Selling Song, and Top Collaboration. Drake, Ariana Grande, Travis Scott, and Post Malone are all nominated alongside Cardi B for Top Artist.

You can check out the truncated list of nominees here.

And now, back to BTS.

The BTS ARMY is losing it with excitement over BTS' milestone nomination.

Fans are so happy that the group is now getting recognition for its music and not just the social media presence of their fans.

Now that they reached this milestone, fans have gotten "BTS Paved The Way" trending worldwide.

This is just the cherry on top of the cake that has been a big couple of weeks for BTS. The first official photos of the group's (probably hugely lucrative) BTSxMattel dolls dropped last week. The dolls won't be available until this summer, but something that will be available real soon is their NEW ALBUM, Map Of The Soul: Persona.

Map Of The Soul: Persona is set to release on Friday, April 12. And then, on Saturday, April 13, BTS will perform on Saturday Night Live for the first time ever. Mind you, they're still touring their most recent album, Love Yourself: Answer. No, these guys do not sleep.

On March 27, BTS dropped the trailer for the new album. The group has traditionally dropped a trailer before the release of every new album. The trailer is typically a full song with a music video performed by one member of the group, but it doesn't serve as the lead single from the album. This time around, RM's music video for his solo song "Persona" served as the trailer, and it's all kinds of epic.

In the song, RM gets hella existential and raps,

Who are you? Who are you? You're a nominee in the Top Duo/Group category at the BBMAs, that's who!