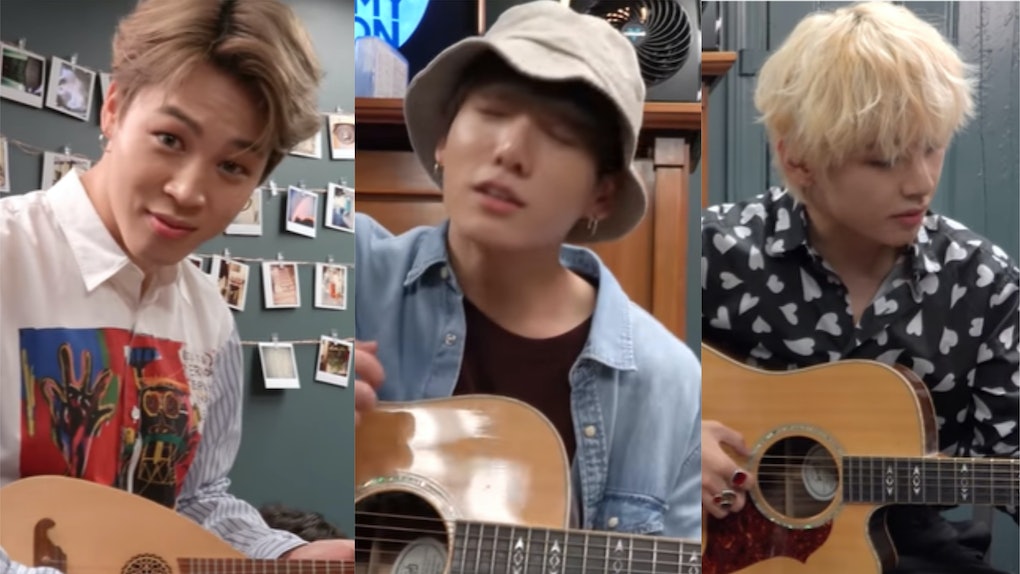 This Video Of BTS' Jimin, Jungkook, & V Playing Guitar Is So Hilarious

It's a new day, which means the BTS ARMY have, yet again, been blessed with another Bangtan Bomb video from BTS. These clips will never get old because they show BTS being their true selves behind the scenes of performances and photoshoots and the BTS ARMY loves that. If you know anything about BTS, you know they're all hilarious and there's never a time when they're not having fun. These guys define having a good time and this video of BTS' Jimin, Jungkook, and V playing guitar proves it.

Based on the guys' outfits in the video, it seems this clip was taken back in September 2018. More specifically, it was probably taken on Sept. 25, 2018 — the day BTS appeared on The Tonight Show Starring Jimmy Fallon to perform "IDOL." In the clip, BTS was backstage and passed the time by playing the guitar.

It started out pretty well. Jimin played the notes to Justin Bieber's "Love Yourself," while Jungkook sang a little bit of the track and it sounded really good (duh). Jungkook is a huge fan of Justin Bieber (he covered JB's "2 U," "Nothing Like Us," and "Mistletoe"), so he was able to bust out in a mini "Love Yourself" karaoke sesh like it was no big deal. Although, it was obviously a huge deal to fans, since they want Jungkook and Justin Bieber to collaborate — especially after Bieber wished Jungkook a "happy birthday" on Twitter for his birthday this year.

Anyways, after Jimin was done playing the guitar, he passed it onto Jungkook, who started playing the guitar badly and singing off-key. Obviously, Jungkook was just messing around (he's literally good at everything — he doesn't have the nickname "golden maknae" for nothing) and he probably wanted to make his fellow BTS members laugh, which worked. The rest of BTS couldn't help but look at Jungkook in admiration and laugh along with him.

Take a look at the video below.

According to fan @choi_bts2 on Twitter, the songs Jungkook played in the video were "Yeosu Night Sea" and "Cherry Blossom Ending," which are both songs by the Korean band Busker Busker.

ARMYs also know that the last song Jungkook played was actually a BTS song called "Butterfly," from their 2015 album, The Most Beautiful Moment in Life Pt. 2. Do yourself a favor by listening to "Butterfly" below because the song is gorgeous.

Later on in the video, V had a turn playing the guitar, too, but then he quickly switched over to playing the ukulele and sang Jason Mraz's "I'm Yours." Oh my gosh, him singing a few notes from the song makes me wish he would cover "I'm Yours" for real.

Jimin then took the ukulele from V and tapped on it to the beat of a song playing in the background on TV. He matched the ending perfectly with the audience's applause on TV and he looked so satisfied with himself.

Just look at Jimin's adorable face at the end:

Jimin looked so happy and after watching that video, I'm left feeling pretty happy, too. But honestly, that's how I feel after watching any BTS video.