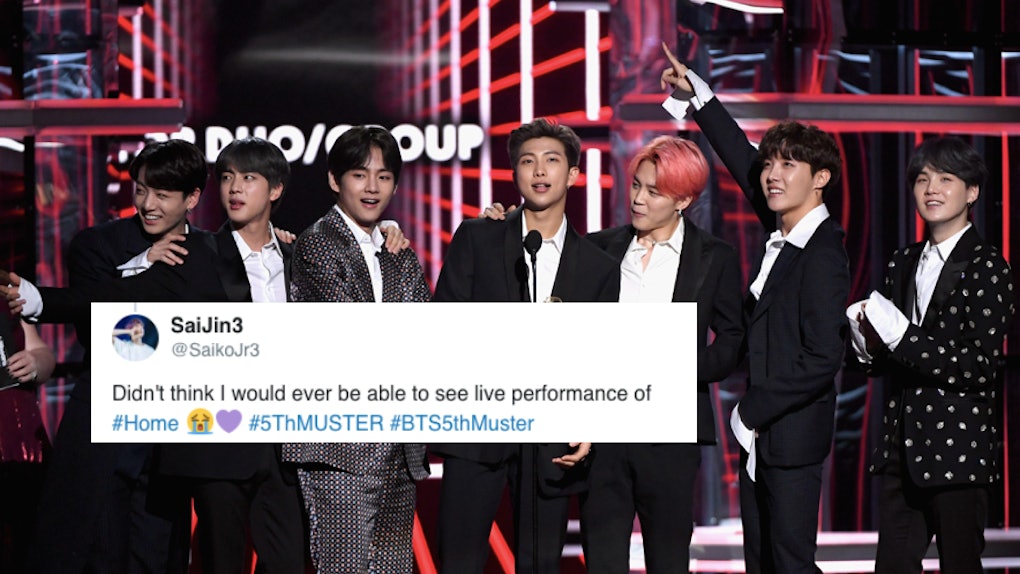 BTS finished the first day of their fifth Muster on June 15, and it included a special debut that ARMYs have been waiting for. Yep, BTS finally performed "HOME" from their Map of the Soul: Persona album, which was released in April 2019. The first-ever performance of the fifth song on their latest album came during the event in Busan, South Korea, at the Busan Asiad Auxiliary Stadium, and this video of BTS' "HOME" performance at their fifth Muster holds an extra special meaning for two members of this all-star K-Pop band.

In case you're not familiar with where the members of BTS hail from, I'll fill you in with the details that diehard ARMYs probably already know: Jimin and Jungkook are Busan natives. So, you probably don't have to connect too many dots to realize BTS' inaugural performance of "HOME" taking place in the hometown of two of the seven members of the band is a pretty significant moment. Combine that with the fact that this was the first time ARMYs got to see the song performed live, and yeah, you've got a pretty awesome performance on your hands.

By the cheers from the ARMYs in the crowd, it's clear BTS fans know how to recognize a noteworthy moment when they see one.

Honestly, ARMYs could barely handle the fact that BTS finally unleashed a killer performance of the song.

It makes sense that fans were hype about the performance, because beyond welcoming Jimin and Jungkook back home to Busan, the "HOME" lyrics really have a special message for ARMYs. In the song, the band sings about how ARMYs are their — wait for it — home. In the song, BTS shares how even though they might not feel like they're at home when they're playing venues all around the world or driving fancy new cars, their ARMY always make them feel like they're home. Aww, I can't even with how much BTS loves their fans!

BTS' fifth Muster has a "Magic Shop" theme, which is a song off the band's 2018 album, Love Yourself: Tear. The first part of the band's fifth Muster, aka a gathering for ARMYs to mingle and watch BTS slay performances, was a two-day event in Busan that began on June 15. One day before the Muster, on June 14, the official BTS Twitter account shared a tweet from Jimin, which showed Busan buildings lit up in purple (the official color of ARMY) for the big Muster.

ARMYs were quick to welcome back Jimin to his hometown.

Following day one of the Muster, Jungkook shared a couple selfies and a message, when translated from Korean to English, reads:

I enjoyed it very much ≥∇≤

So, it looks like the two hometown boys enjoyed gifting ARMYs a debut performance of "HOME" alongside their other bandmates.

In fact, I think Jimin, Jungkook, RM, Jin, Suga, J-Hope, and V all had a blast at the first day of Muster, especially if their "DDAENG" is an accurate indicator. On the same day as their "HOME" debut, BTS switched it up and all rapped different parts of "DDAENG," with Jimin and Jin taking over J-Hope's part, V rapping Suga's part, and Jungkook taking the reigns on RM's part. It was a switch from the OG version, but ARMYs really loved it.

Seeing as though both BTS and ARMYs are having a blast at Muster, you can look forward to what else will happen during day two on June 16. As for the second part of the fifth Muster, you can even tune into a livestream of the Sunday, June 23 festivities taking place in Seoul, South Korea, at the Olympic Gymnastics Arena.

IDK about you, but day one has my hopes set real high for the next three days of Muster, coming on June 16, June 22, and June 23. In the meantime, I'll be playing "HOME" on a loop.

More like this
Taylor Swift's 'Fearless (Taylor's Version)' Lyric Changes Are Small, But Meaningful
By Michele Mendez
Here's How To Get Taylor Swift's "Fifteen" Snapchat Lens For A 'Fearless' Preview
By Cianna Garrison
Here's Where To Find Spotify Mixes By Artist, Genre, & Decade To Discover New Music
By Lara Walsh
Stay up to date