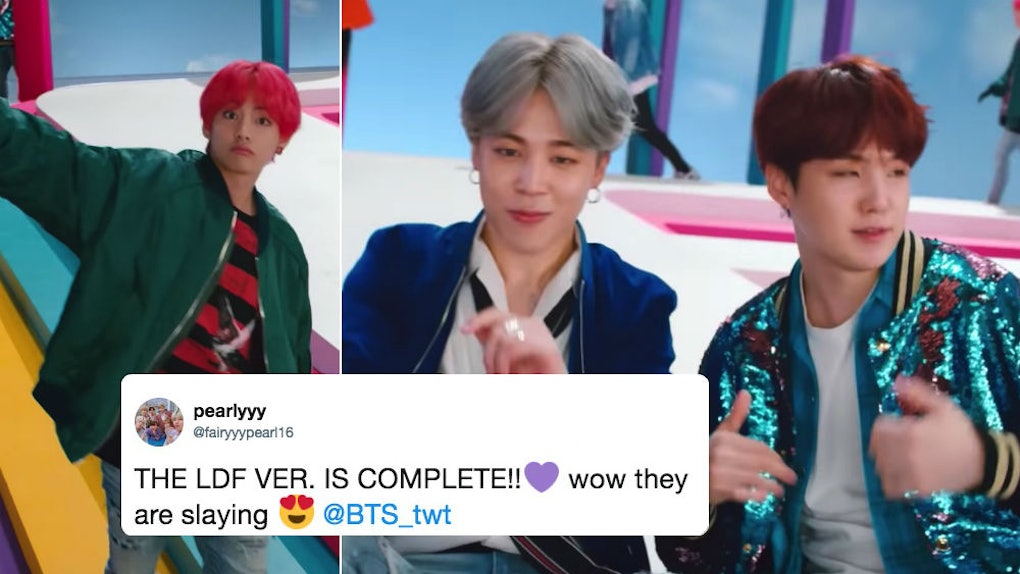 I knew it was coming, but I'm delighted anyway. The third and presumably final video from BTS' new partnership with Lotte Duty Free is here, and it's as much fun as the two that came before it. True ARMYs follow BTS and their every move, so they're well versed on their sponsorships. The gang has proven to create commercial gold, considering all of their ads are as fascinating and gripping as their music videos and concerts. (Yes, even if they're only 15 seconds long.) The video of BTS' "F" Lotte Duty Free ad is colorful, vibrant, and a little more straightforward than the "L" and "D" ads that came before it.

This is the set up: Lotte Duty Free is Asia's top duty free store. Their logo is a combination of their initials LDF that are designed in different and striking ways. The "L" is made up of sleek, graphic neon white lights, the "D" is more of a jungle setting, and "F" is a multi-tiered, colorful stage. In the individual commercials, the camera zooms in on each letter, where we find the boys hanging out and dancing in the varying environments. For the letter "F," this means the boys are chilling on bright steps and mugging for the camera as if they're on stage.

I'm honestly not really sure which commercial is my favorite. "F" is definitely playful, but the catwalk theme for the letter "L" was sexy AF. In the first of the three ads, the boys wore black outfits and served some grade-A Tyra Banks smizing.

However — I'm biased for the letter "D." I think the set design and production in the jungle-inspired ad is more interesting and detailed. It really seems to transport viewers to another world.

There, I said it.

Naturally, fans are having a hard time deciding which ad is their favorite. All they know is that they love BTS, and probably love Lotte Duty Free now, too. Twitter is, of course, blowing up with comments regarding the commercials.

The fact is, these ads are just one small piece of the BTS empire. The K-pop group sensation is, by every standard, everywhere. They thrive on social media, the music charts, television, on stage, and of course, in commercials now, too. Right now, their biggest collaborations are with LDF and Hyundai Palisade, but there has to be more where those came from. However, with each new endeavor, the boys remain endlessly humble.

I've only recently begun watching their interviews (I know, where have I been?) and the one theme that comes through every time is how much love and respect they have for their beloved ARMYs. The boys never seem tired, jaded, or egotistical. Perhaps this is the secret ingredient to creating a sustainable, global icon!

I'm just waiting for them to endorse a product I can order on Amazon. Colored-hair shampoo, maybe? The world's best dancing shoes? Whatever BTS is selling, ARMYs are buying.

More like this
This Theory About The Songs In BTS' "Butter" Concept Videos Will Blow ARMYs' Minds
By Michele Mendez
BTS' "Butter": Release Date, Music Video, Performances, & More Details
By Michele Mendez
This Video Of Wonho Answering Trivia Questions About Himself Is Required Viewing – EXCLUSIVE
By Brandy Robidoux
Stay up to date